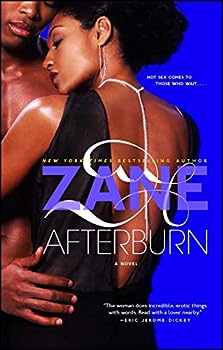 This description may be from another edition of this product. When Washington, D.C., chiropractor Yardley Brown goes to his local bank, it isn't only to make deposits into his account. He has long since accrued some interest in Rayne Waters, a bank employee...

Published by Maya , 9 months ago
I can remember when I was a little girl and seeing my mother with Zane books. Now I am old enough to read them and I absolutely love Zane. This was my first Zane book, but definitely not my last. This book was good, but it has an ending that you won't see coming.

Published by Britt , 9 months ago
I read this book in 1 day! I couldn't put it down, its definitely a must read! Just shows that you gotta kiss a few frogs to meet your prince or princess

Published by Harley , 2 years ago
Book started off kinda slow but eventually built up to a decent story line but I would have liked the book way more if it ended differently .. I got the point that was supposedly made for the book though ..

Great book with a surprise ending!!!

Published by Thriftbooks.com User , 16 years ago
Great book with a surprise ending!!! Zane took my by surprise with this book. The book takes us through the lives of Rayne Waters and Yardley Brown. The book opens with an important line. "Things don't happen when we want them to happen; they happen when they're supposed to happen." Rayne is living a drunken mother and Yardly's friends get him a prostitute for his 16th birthday. Skip ahead years later, and Rayne works at a bank, and Yardly has his own chiropractor practice. He always sees Rayne when he makes his deposits at the bank, and is trying to muster up the courage to speak to her. Some of the names in this book were a little ghetto fabulous. Boomqueesha, Conquesto? Rayne is always dealing with money borrowing drunk mother. Rayne at one point dates Boomqueesha's brother Conquesto. Conquesto is an excon who has no money, and does not wash his hands after using the bathroom. When Rayne goes out on the date she ends up paying for everything. Yardley gets a call from Roxie a girl he had a major crush on in high school, but could not face after having the prostitute for his birthday. Rayne Waters a distant memory with Roxie back in the picture. Yardley tries to date Basil, but the church boy is not trying to have any hankie pankie. Yardley decides to set his sights on Rayne when he catches his best friend Felix having sex with Roxie during a superbowl party at his house. Basil and Rayne end up being platonic friends nothing more. Rayne is not having much luck with the men. She meets Kahlil Henderson and turns out he is on the DL. Just used her to pass himself off as a heterosexual man. Yardley and Rayne finally meet. Rayne does not want to mix business with pleasure, but Yardley is relentless. Roxie keeps trying to get back in Yardlie's life and he has no intention of every being with her again. She can't be trusted, and he is not wanting anything to do with Felix. Felix knows that respect has to be earned again. Rayne's mother shows up unexpected and a 3 day stay turns into a 3 week stay. Rayne is ashamed of her mother. If I had a mother like Rayne's I would be ashamed too. There is a hilarious scene where Rayne's mother shows out during a dinner at Yardley's parents. I know that Rayne wanted the floor to open up and swallow her up. Yardley is the kind of man every woman wants. A Gentleman!!! I just wanted him to appear right before my eyes. There was a love scene so passionate in the book between Rayne and Yardley is brought tears to my eyes. It was amazing!!!! The book was more character driven, then lust driven like Zane's past books. The book reminds you everything won't end in a happy ending. Because life is not always a happy situation. Sometimes you have to deal with grief and sadness. I'm looking forward to the second part of this book. Afterburn was a lot better than Skyscraper.

Tomorrow is Not Promised

Published by Thriftbooks.com User , 16 years ago
Many of us walk around day after day being consumed by life's little dramas and end up missing out on some of the more important things like love and companionship. Not to mention the folks who are mad about irrational things and those who are consumed by insecurities that prevent them from going after their heart's desires. These people are just wasting time. And that is the theme Zane focuses on in her latest release, AFTERBURN. Rayne and Yardley eye each other at the bank where Rayne works on a daily basis, but it is months of wasted time and outrageous dating shenanigans before they finally hook up with each other. Once they do, though, it is a match made in heaven and they both realize how futile and empty their lives were without each other. Zane also examines the twin forces of friendship and betrayal, commitment and temptation, and faith and doubt through an ensemble cast of friends and family. Zane has provided her readers with an exceptional plot infused with some of the most erotic sex imaginable. This is my first time reading one of her novels, and while few authors live up to the hype surrounding them, Zane actually surpassed my expectations. Her work is thoughtful, hilarious, sexy, and inventive. I look forward to more of the same from her in the future. Reviewed by Kim Anderson Ray of The RAWSISTAZ™ Reviewers

Published by Thriftbooks.com User , 16 years ago
I've read just about all of Zane's books and by far this 1 takes the cake. I've read plenty of books but this is the first book ever that has moved me to tears. I highly recommend it, not only is it an excellent read but it's written with purpose.

Published by Thriftbooks.com User , 16 years ago
I have to say that this newest addition to my Zane library(I have all of them) is the best. I absolutely fell in love with Yardley Brown. All the characters are wonderful and I can only imagine being Rayne growing up with a mother like Arjay a self proclaiming whore!!! Although I was a bit upset with the ending I see why Zane had to take it there to get her message across about not wasting time. We all tend to worry about the what if's instead of focusing on the here and now and what feels right at the time and Yardley and Rayne did just that, wasted time. But they made it through it all until....Now I can't tell u everything!!! All I can say, Afterburn is funny,sexy,and definitely Zane's best work yet!! PS Raoul is even mentioned in this one, and who can forget Raoul!! Looking forward to Solitaire:Afterburn 2!!

One great novel, one great message

Published by Thriftbooks.com User , 16 years ago
Zane has done it again, created a masterpiece. This novel took you through the characters' struggles, growths and realizations. I really luved this book. It totally surprised me at the end. I am looking forward to the follow up to this. I laughed, I cried, I blushed, and really enjoyed the read. I especially enjoyed how Zane shared some of her life experiences at the end. Keep 'em coming Zane.
Copyright © 2020 Thriftbooks.com Terms of Use | Privacy Policy | Do Not Sell My Personal Information | Accessibility Statement
ThriftBooks® and the ThriftBooks® logo are registered trademarks of Thrift Books Global, LLC