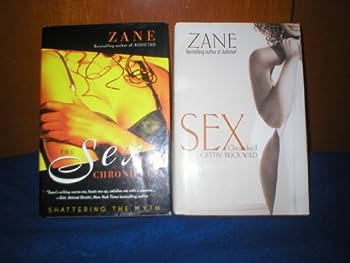 The Sex Chronicles: Shattering the Myth

Published by Harley , 3 years ago
It's was an okay book just a bunch of short stories only a few were good reads ..

Published by Thriftbooks.com User , 3 years ago
Love the fact that Zane doesn't care what anybody thinks about her books. This book has open my mind so much. It's a must read. I've been buying all her books that's how much I love her book.

Published by Thriftbooks.com User , 18 years ago
Or, as more people do, come in Zane. I picked this up when I would be away from the comforts of home for a week. It was just what I wanted - literate, luscious, and lusty. It's erotica that I can really enjoy, the kind that's mostly about people enjoying each other all out, in every way a body can please a body, own or others'. There's not much here for the fetish crowd, and almost every encounter centers on one man and one woman (from her point of view). Maybe that's not enough variety for some readers, but the endless variations work for me. This is enjoyable, intelligent, and sexy, with extra flavor from Zane's brown sugar. I'm coming back for more. //wiredweird

Published by Thriftbooks.com User , 21 years ago
Turn up the air conditioning and PLEASE have a man on standby!! Whew! The visual pictures this book evokes is nothing compared to the feelings it stirs up! Girlfriend, you are to be commended for putting it out there and going where no one has really had the nerve to go, and tastefully at that. I have never been a short story person, preferring the evolution of the characters and storyline in novels. However, each story was so well rounded, it was like small doses of chocolate. Just right and hits the spot, even though you know you're not suppose to be having it at all. I can't wait to read Addicted and Shame On It All. If the short stories are that good, I can only imagine that one concentrated story will be off da hook! For anyone who feels they have gotten into a rut cause you've been married or together for so long that sex has become routine, then you NEED this book. Trust me. It'll open up a whole avenue of new ideas!! LOL Zane, keep of the good work.

Published by Thriftbooks.com User , 22 years ago
I have never been big on erotica. At least, not until now. I have read several of those so-called "Best Erotica" books and they were drab and totally boring. Some of them I struggled to get through and others I simply tossed aside. Now a writer has finally come onto the scene that knows what erotica is all about. The characters in Zane's stories are so vivid and wonderfully crafted that you can actually start relating to them in the 10-12 pages you get to spend with them in their individual stories. The wild part is that Zane's stories are so different from one another while the anthologies containing several different authors all sound redundant. Most of all, Zane has made me realize that I am normal and I am relieved to know that other women think just like I do. This book is not for the prudish and sexually-repressed. If you want to read the hottest book of the year, The Sex Chronicles is definitely it.

Published by Thriftbooks.com User , 22 years ago
I have been one of those fortunate to catch some of Zane's stories on the web. This body of work however, The Sex Chronicles, by far surpasses anything I've read from her to date. It is def. much wilder and delivers on its promise of being "of da hook." Not only that, but in mostly all of the stories, she paints a picture so vivid, that you could actually get consumed into the story, feeling you are actually a part of the action. I was also impressed with the realism of the stories, being able to identify because I've either been involved in similar situations, or knew of someone who was.I can't leave without commenting on the other promise that this book fulfills- "Shattering the Myths." After reading I can say that my personal myths were shattered about the sensuality of women. Reading these stories brought forth an understanding that women are every bit the sexual beings we are, if only a little different.Excellent work. Zane. Erotica, tastefully Done.

Sensuality at it's best!

Published by Thriftbooks.com User , 23 years ago
While not the biggest fan of erotica in the past, having read a few of the other erotica books on the market only to be left disappointed, I felt compelled to read The Sex Chronicles: Shattering the Myth because I have become a huge fan of Zane through her newsletters over the past two years. The other erotic writers out there only scratch the surface. Zane takes erotic fiction to an entirely different level. Her characters are vibrant, the situations are real and the stories are sensual. Some of the stories were so engaging that I could barely sit in my seat without squirming and others were so funny that I couldn't control my laughter. Every last one of the stories stirred something inside of me and I have never had a book do that to me before. The sister is truly talented and I would encourage anyone, no matter what your sex or race, to pick this book up with a quickness. Zane is destined for greatness and I can't wait to see what she writes next.
Trustpilot
Copyright © 2022 Thriftbooks.com Terms of Use | Privacy Policy | Do Not Sell My Personal Information | Cookie Preferences | Accessibility Statement
ThriftBooks® and the ThriftBooks® logo are registered trademarks of Thrift Books Global, LLC