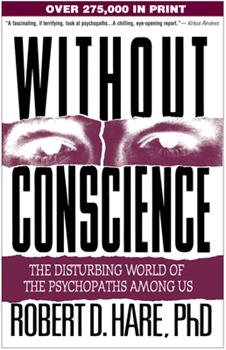 Without Conscience: The Disturbing World of the Psychopaths Among Us

Most people are both repelled and intrigued by the images of cold-blooded, conscienceless murderers that increasingly populate our movies, television programs, and newspaper headlines. With their flagrant criminal violation of society's rules, serial killers like Ted Bundy and John Wayne Gacy are among the most dramatic examples of the psychopath. Individuals with this personality disorder are fully aware of the consequences of their actions and know...

No, YOU'RE not crazy! Great for figuring out what hit you!

Published by Thriftbooks.com User , 16 years ago
I had the misfortune of having a psychopath wreak havoc in my life and the lives of my friends and family a few years ago. This followed an incident in the 1990s, where a group of us at an Ivy League university were scammed by a beautiful con artist. I asked a friend who works for the FBI how this could happen twice in a relatively short time period to a group of pretty darn smart people. His response: 1 out of every hundred people is a psychopath. They are not all murderers and they are not all in prison - they live among the rest of us and are often charming and interesting, at least on superficial acquaintance. We had the misfortune of running into two of them in a decade because we were living in places that psychopaths often target: where people with money and power are. These people THRIVE in transient communities, especially in RICH, transient communities. The university town and the ski resort where we met these folks both have wealthy, transient populations. Apparently, we lived in a dream destination for con artists. (Later, when speaking to long-time residents of the ski resort about what I learned from my FBI pal, I was amazed to hear that they also had learned - with hard experience - that this gorgeous little town had attracted far more than its fair share of really awful people who stole and lied and cheated their way into big money, and then disappeared, with hearts broken, bank accounts empty, and other people holding useless contracts and big debts.) Normal people give most people they are getting to know the benefit of the doubt, so when things said by these two people didn't add up, we all kind of blew off that troublesome "hey, wait a minute!" feeling. THAT was our mistake, both times. If we'd paid attention to that niggling "something doesn't add up" feeling, we wouldn't have had money and credit cards and jewelry - and a Mercedes! - stolen, reputations and credit ratings (thankfully only temporarily) smudged, and - for a few of the people - there wouldn't have been broken hearts and sad days and weeks of wondering, "how could s/he have deceived me so when I was so good to her/him??" Strangely enough, after their stories were blown, family members of both of these folks admitted that the behavior of their psychopaths had driven them to depression and other problems; in both cases, therapists had told the family members that these con artists were most likely psychopaths! If you've had a psychopath in your life, this book will really help you. Somehow, once you know that what you've lived through is part of a larger pattern that also happens to other decent, intelligent, hard-working, and honest people everywhere, then it's easier to gain some distance -- and more importantly, to actually listen to your instincts the next time you have a "hey, wait a minute" moment, when you think, "something doesn't add up here!" Listen to your instincts. They're right more often than you'd think.

Published by Thriftbooks.com User , 16 years ago
I read this book a few years ago and was fascinated by it - as someone who reads true crime books, such as those written by Ann Rule, I wondered about the mental make-up of psychopaths and how they came to be they way they are. Professor Hare's book is not an academic text but instead, is geared towards the layperson. I feel he does an excellent job of explaining what psychopaths are, how they came to be that way (unlike other writers, he does not blame childhood abuse entirely but notes that there seems to be a genetic component involved, as well) and how to recognize them. I turned to this book again after following the Scott Peterson trial and hearing experts describe him as a "classic psychopath". Dr. Hare's description of the psychopath's inability to feel emotion would seem to explain Scott Peterson's behaviour: his total lack of remorse, his callous and cavalier actions during the time his wife was "missing" and finally, his complete lack of any reaction at all to the verdict and sentencing. A very good book, highly recommended.

Published by Thriftbooks.com User , 16 years ago
Robert Hare's book is a landmark publication and very frequently referenced by other professionals, which speaks to the respect in which his colleagues hold his research and writings. This is an excellent book. It is well-written, lucid, and aimed at the lay person. His clarification of the terms "psychopath," "sociopath" and "anti-social personality disorder" are quite useful. My only problem with the book is that Hare's examples come largely from the criminal world, where many psychopaths end up, and in which he worked for many years. Because of this, we may lose sight of the fact that many "psychopaths" are NOT criminals, but produce enormous chaos and emotional mayhem in the lives of others -- others who do not understand this disorder and cannot make sense of what has happened to them. Psychopaths by their very nature are con artists, but not all are thieves and murderers. Some are just emotionally abusive, cruel, manipulative, controlling and bring families, employees, employers and acquaintances to ruin in a hundred other ways. Empty, pathetic and destructive, they run the gamut from the emotionally frozen, disengaged, cruel parent to the serial killer -- all marked by one thing, their inability to relate empathetically to others.

A fascinating look at the psychopaths among us

Published by Thriftbooks.com User , 19 years ago
Psychopaths are social predators severely lacking in conscience and empathy. The view promulagated by popular media (especially works of fiction) is that all psychopaths are bizarre serial killers, perhaps indulging in some grandiose ego trip. The reality is that there are only an estimated 75 serial killers in the entire world, compared with several millions of psychopaths in North America alone. THESE PREDATORS LIVE AMONG US, YOU INCLUDED. I have read much literature on the subject ranging from case studies to complex psychodynamic analysis. Without conscience is the first to paint the portrait of the psychopath in a way that is palatable to the lay reader. In this book, Robert Hare (the leading researcher on the topic and arguably the most knowlegable in the world) describes the inner and outer world of the thieves, con artist, murders, rapist, child abusers, corporate crooks and career exploiters of others that make up the most depised class of human beings known to the world. He passes through the outer image of "nice guy" charm and brings to light the deceit, manipulation, lack of feeling and utter selfishness that mark such individuals. Here is a quick breakdown of whats discussed in the book: * "Experiencing" the psychopath- In the opening chapters and throughout the book Dr. Hare describes the intial reactions that occur when one first interacts with a psychopath. Psychopaths often have an ability to make a huge first impression * The lifestyle and relationships characteristic of the typical psychopath- Here you learn about specific psychopathic traits; such as the charming personality, hugely inflated sense of self worth, manipulation, dishonesty and the generally predatory nature of psychopathic behavior. * Hare uses examples of real life psychopaths to illustrate the behaviors and traits he describes throughout the book. He discusses why psychopaths are "naturals" at committing crimes. He also addresses the common question "why are some people like this." I strongly feel that this book is a good purchase for anyone. If you have never been up close and personal with a psychopath, you will feel like you have gotten to know one through those portrayed in this book.Those involved in any aspect of the criminal justice system or mental health industry will without a doubt come in to contact with many psychopaths and will need to be familiar with the traits therin. Psychopaths are ubiquitously as a class extremely poor canidates for rehabilitation or therapy and will try to use the system to their advantage much as they do their victims. If you have been sucked in by the charm, fake concern and elaborate stories of someone whom you believe could be one of these individuals then by all means, buy this book. It will empower you and give you an action plan for getting them out of your life. The type of people described in this book will make a victim out of anyone in a instant. Along with being an intensely fascinating read, this
Copyright © 2020 Thriftbooks.com Terms of Use | Privacy Policy | Do Not Sell My Personal Information | Accessibility Statement
ThriftBooks® and the ThriftBooks® logo are registered trademarks of Thrift Books Global, LLC