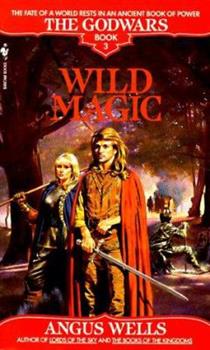 (Book #3 in the The Godwars Series)

This description may be from another edition of this product. Wild Magic is the dazzling conclusion to The Godwars, an epic quest of daring heroism and startling magic by one of the rising stars in the fantasy firmament. When the First Gods created all things,...

A fine conclusion to a good series

Published by Thriftbooks.com User , 21 years ago
Wild Magic kept pace with the first two books in this trilogy, and kept my attention just as much. The personal trials that Calandryll, Bracht, Katya, and Cennaire go through flesh these characters out even more. The battle at the end of the book was good, and the conclusion was captifying as well. I'd recommend this to anyone looking for a fantasy series.

Published by Thriftbooks.com User , 22 years ago
THE GODWARS. When the First Gods created all things, they brought forth two lesser gods, Tharn and Balatur, to walk upon the new world. But greed and power twisted their minds and turned their ambition into madness. And so the First Gods condemned them to eternal sleep in order to preserve creation. Now, the exiled prince Calandryll, the mercenary Bracht, and the warrior woman Katya pursue Rhythamun, a powerful wizard who would wake one of the mad gods and provoke apocalypse. He carries with him the Arcanum, an ancient book of power that--simply by virtue of having been discovered--already stirs the god from his slumber. But Calandryll and his companions are chased by another vengeful mage, whose dark magics have created Cennaire, an undead murderess, to thwart their efforts. And as they face the perils of civil war, magical assaults, and the ever-present threat of Cennaire's treachery to reach Rhythamun before he wakes the god, they live with the knowledge that the fate of the world rests solely in their hands.
Copyright © 2020 Thriftbooks.com Terms of Use | Privacy Policy | Do Not Sell My Personal Information | Accessibility Statement
ThriftBooks® and the ThriftBooks® logo are registered trademarks of Thrift Books Global, LLC