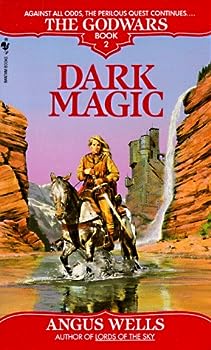 (Book #2 in the The Godwars Series)

This description may be from another edition of this product. Ages ago, when the First Gods ruled heaven and earth, they created two lesser deities to reign along with them. But these gods, Tharn and Balatur, were flawed. Their madness threatened creation itself...

A strong sequel with even more depth

Published by Thriftbooks.com User , 13 years ago
A series which continues to get better. The author's use of descriptive language is exceptional, and chances are that you'll run across several words you've never seen before, even those with large vocabularies. The dialog is quite fine, too, but the narrative voice is where the author really shines. The only issue I have with the narrative voice is that it still gives annoying "little did they know how wrong their assumptions would be" kind of giveaways. I understand what the author's trying to do, but it ruins the immediacy of the story. Still, a fantastic, entertaining read. I'm a little concerned at some of the prices put out for single copies of the book ($27.00 for a new paperback copy?), but such are the throes of the publishing industry.

Published by Thriftbooks.com User , 18 years ago
Travel with Calandryll, Bracht & Katya on their quest to stop the evil necromancer, Rhythamun, from raising the Mad God Tharn. The addition of a revenant adds to the interest and keeps the reader hooked, hoping they can excape its evil clutches in order to save their world. A great second novel. Can not wait to finish the third.

Published by Thriftbooks.com User , 24 years ago
DARK MAGIC picks up where FORBIDDEN MAGIC ends. The story is just as action packed as the first, and this time it even brings in a couple of minor subplots which help to make the story richer. The biggest flaw of this novel, like the first one in the series, is it's lack of depth. Wells only puts his reader part of the way into his world, not elaborating enough. But despite this, it is still a good story worth reading if you can find nothing better to lay your eyes upon, and it shouldn't take to long to read this story
Copyright © 2020 Thriftbooks.com Terms of Use | Privacy Policy | Do Not Sell My Personal Information | Accessibility Statement
ThriftBooks® and the ThriftBooks® logo are registered trademarks of Thrift Books Global, LLC