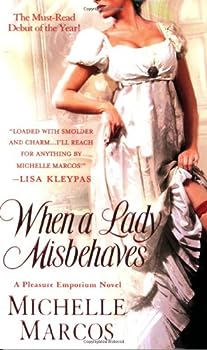 When A Lady Misbehaves (Pleasure Emporium)

(Book #1 in the Pleasure Emporium Series)

Published by Thriftbooks.com User , 14 years ago
How can a titled aristocrat and a scullery maid fall in love and get married? Only a master could pull this one off. I should note that I give romance authors a lot of leeway in terms of historical accuracy--as long as they can help me have a laugh and believe in love again. The romance genre may as well be called fantasy because about 2% of the story is "historically accurate" much less accurate to real life. But I believe those of us willing and eager to suspend judgment will love this book. April, the heroine, is a survivor with panache. Finally a woman who doesn't kowtow, isn't passive aggressive and isn't a martyr. Finally a romantic heroine who is strong enough to be bad! She's so sassy, spirited and honest with her heart that you can see why the hero, Riley, fell in love with her. Plus she's hilarious, strong and fights for what she wants. At one point Riley is teasing April about her jealousy regarding his former fiancé and April's arch-nemesis, Lady Agatha. He's laughing. She's holding a toy knife and tells Riley, "I'll have your heart even if I have to carve it out!" Ah, how romantic. Riley is great, too. The upright judge in him can't help but admire how adeptly she spins a story. He's also honest enough with himself to admit his feelings, fight for her and forgive her. And of course he's hot. Oh, and rich. Didn't I say this was a fantasy? No silly reasons for not getting married, no pity-parties. No contrived conflicts to fill pages. Just lots of fun while April and Riley sort through the huge mess she created trying to pass herself off, repeatedly, as a long lost bastard child needing a little cash. My only complaint (this is directed to author and publishers) is the last chapter. Is it really necessary to pull everything together so tidily? I say continue with the "show, don't tell" policy used so successfully throughout the rest of the book. Well, it's a fab read. Good writing, great story, great characters. Recommended especially if tired of those other wishy-washy, blue-stocking, passive-aggressive, sex-starved, bitchy, martyred clichéd "heroines".

Published by Thriftbooks.com User , 14 years ago
Wow! I just finished this book last night, and...wow! What a debut. I loved April and Riley's story. Riley is an incredible man and April is a perfect match for him. I look forward to reading the other books in this series!!!

Published by Thriftbooks.com User , 14 years ago
Oh wow! This one is without a doubt the best romance I've read all year. "When a Lady Misbehaves" is about a feisty young woman named April Jardine. Although she's a lowly scullery maid in an upscale brothel, she has high aspirations. These aspirations extend far beyond becoming one of the madame's high class hookers. When faced with an ultimatum, e.g. become a hooker or get lost, April chooses the latter. But she doesn't walk away empty handed. She absconds with the madame's journal aka transactional history book. This journal proves to be a gold-mind. April and an associate defraud several high falutin perverts out of two thousand pounds - today's equivalent of many tens of thousands of dollars. Of course like all wrongdoers, they try to pull a fast one on the wrong person. This wrong person takes the form of Lord Riley Blackheath, Marquess and Circuit Judge. Unlike the other fools they defrauded, Lord Blackheath is onto their scheme. He doesn't quite have all the details, but he is determined to expose them for what they are. What begins as a straight forward plan turns awry, however. Lord Blackheath cannot account for the whims of the heart as he falls head over heels in love with April. This book is truly funny, e.g. laugh out loud, witty, romantic and original. April isn't the typical heroine. She does some pretty bad stuff, but she's likeable and one can't help rooting for her. Overall, I hugely endorse this book!!

Wonderful in every way

Published by Thriftbooks.com User , 14 years ago
This book has what's missing from so many romances today--heart and soul. The characters and the story are truly original, and I found myself smiling and sighing throughout the book (and turning the pages rapidly because it's such an absorbing read). My only regret is that the author doesn't have more books out, because I'm hooked!!

Published by Thriftbooks.com User , 14 years ago
4.5 stars. This is a such a fun, clever, witty and heart-melting romance. I picked this book up without a clue who the author is, nor had I read any reviews of this book. I based my purchase solely on two things. First, the endorsement by Lisa Kleypas compelled me (I know, I know, I've been burned more times than not when buying books solely on the endorsement!). The second reason was the first few pages just grabbed me. I love historical romances; especially those that can make me both laugh and cry, so I thought I'd give a try. And I really loved it! I will read this author again. Her writing is fresh and so clever. The passion felt so real, the characters were full of life, and the story never had a lull. I'd rate the love scenes and sensuality somewhere around medium warm. Not quite the hot and spicy romances that I prefer, but it was a very satisfying romance story. This is a great Cinderella-ish type story, with a young, feisty heroine named April (the Dustbin Dutchess) and Riley, the rich, handsome and titled hero. They come from different worlds, but when they collide the sparks really fly. April begins as a kitchen maid at a whorehouse, but daydreams constantly of a better life. She is fascinated by the upper class and follows the gossip rags. She hates that her birth has forced her into servitude and gives her no other options. She is unusual for a servant girl as she is intelligent, morally good, and fairly well educated by her late father. Out of desperation to save her virtue, she plots to make a better life by pretending to be the daughter of a famous courtesan. This sums up chapter 1, and I will stop there. I would recommend that you read this book before reading too many reviews, as you really don't want the story spoiled for you. This book has many "I didn't see that coming!" moments, which may be revealed in some reviews. (bad, bad reviewers!)
Trustpilot
Copyright © 2022 Thriftbooks.com Terms of Use | Privacy Policy | Do Not Sell My Personal Information | Accessibility Statement
ThriftBooks® and the ThriftBooks® logo are registered trademarks of Thrift Books Global, LLC