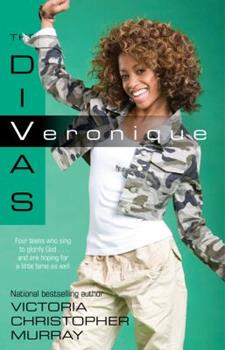 Dreamgirls meets Gossip Girl in this series by bestselling author Victoria Christopher Murray featuring four African-American high-school girls who form their own singing group. This third book in the series focuses on Veronique, as she finds trouble on the internet.

Published by Thriftbooks.com User , 12 years ago
This book was just as good as the previous series about these teenagers and as a parent of a teenager I recommed this book. The author Victoria Christopher Murray is excellant

Published by Thriftbooks.com User , 12 years ago
Divas:Veronique by Victoria Christopher Murray is the third stanza in her young adult series, The Divas. The girls, Aaliyah, Diamond, India and Veronique, are all students at Holy Cross Prep, a private school and are best friends. They also have one of fiercest, Christian singing groups, The Divine Divas. Though the girls are similar in many ways, Veronique has unique differences. Her mother is a single mother to five children. She does not live in an upper-middle class environment, but in the heart of Compton. The thing that bothers her most is that her brothers' father, D'Wayne, continues to show up in her mother's life, only to leave, usually leaving her mom heartbroken and pregnant. She feels that if she and the Divas can win a major competition, she can move them from the projects. But first they will have to win the competition in New York. New York is more than a contest for Veronique; she thinks the father she yearns for is living there and she will do anything to find him. In the weeks before the competition, Veronique decides she is going to find her father on the Internet. Her home life has become unbearable and D'Wayne is looking at her in a less than fatherly way. But is the Internet really the way to go? Her best friend, Diamond, does not think so, but she is unable to convince Veronique otherwise. The question becomes will Veronique find her dad or will her obsession place her and possibly others in danger? Ms. Christopher-Murray does another fine job of writing about issues that concern teenagers and how they must learn to deal with them. As usual, she focuses on the importance of faith, family and friends. I recommend Divas: Veronique to all readers, particularly teens. In fact, the entire series are wonderful books for young people. Angelia Menchan APOOO BookClub
Copyright © 2020 Thriftbooks.com Terms of Use | Privacy Policy | Do Not Sell My Personal Information | Accessibility Statement
ThriftBooks® and the ThriftBooks® logo are registered trademarks of Thrift Books Global, LLC