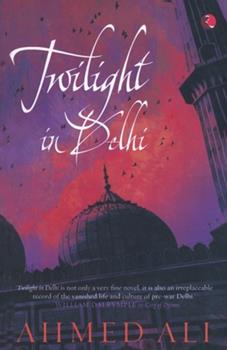 Set in nineteenth-century India between two revolutionary moments of change,Twilight in Delhi brings history alive, depicting most movingly the loss of an entire culture and way of life. As Bonamy... This description may be from another edition of this product.

A scoop of Delhi

Published by Thriftbooks.com User , 14 years ago
This book by Ahmed Ali is a wonderful chronicle of early twentieth century Delhi, almost all Muslim, & a coming together of practices, beliefs & customs stitched neatly in a story. I'd have to say that as a story, or just as a plain work of fiction, it does not really capture the imagination; however, with the backdrop of Delhi, it comes alive as a memoir of times gone by, & mannerisms long forgotten. Having said that, I also felt that characterization was adequate in most places & there is a wonderful interlacing of details & nuances spread across the story. The cultural elements that set a place apart, as in this case, the male early-morning sport of pigeon flying, the tendency to quote often from poetry in conversations, the set-up & lay-outs of a household, a typical Muslim marriage in the early twentienth century, classes of prostitutes - those that just meant a body & then those who were keen singers, & performers & wonderfully evolved at the art of conversation - the sporadic mention of Anti-British feeling among the old generation, & the early adoption of western ways in the young, the by-lanes, the Hakims, the azaans & the quality of voice. Ahmad Ali's style is slightly archaic to read in the early twenty first century & his new introduction to the Novel - written probably sixty years after the novel - tries to justify the thoughts behind this book. While a whirlwind tour of the British in India, & a repository of lavish resentments against the British, at no point does the novel emphasize this except in the passing once or twice or the chapter on the King's procession in Delhi. This is Delhi sans the boorish, & evidently is the story of times long gone. S!

Published by Thriftbooks.com User , 20 years ago
I have just finished reading a great novel ( Twilight in Delhi by Ahmed Ali ) (not for its plot but in its descriptions and language) set in Delhi, just after the War of Independence (1857) about the life and times of an upper middle class Muslim family...this novel is now deemed a classic and was written in 1940 by Ahmed Ali and initially banned by the British...for obvious reasons if you read it!But it is highly recommended, and describes a lifestyle which is now, sadly, vanished for ever...If you are a Muslim you will find this book especially poignant and moving but for all Subcontinentals it tells of how much the British Occupation actually did to destroy Indo-Muslim heritage and culture; will be of interest to all those who want to know what a real Islamic culture was like and the effect of imperialism on it. Especially relevant in light of recent events in NYC. Stunning.

Published by Thriftbooks.com User , 22 years ago
Ahmed Ali poignant storyline acts as a prelude to the social events to follow that would change the city and it's people forever. It allows us to go back in time and be a part of old Delhi, now nonexistant. The introduction (written much later) is a confusing blend of history of the city and author's post-independence experience. I disagree about his comments regarding Rammohan Roy, which is inconsistent in the prose. But all in all, Thoroughly enjoyable!
Trustpilot
Copyright © 2022 Thriftbooks.com Terms of Use | Privacy Policy | Do Not Sell My Personal Information | Accessibility Statement
ThriftBooks® and the ThriftBooks® logo are registered trademarks of Thrift Books Global, LLC