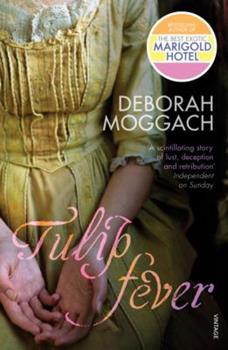 This description may be from another edition of this product. A sensual tale of art, lust, and deception--now a major motion picture In 1630s Amsterdam, tulipomania has seized the populace. Everywhere men are seduced by the fantastic exotic flower. But for...

Tulip Fever of the heart

Published by Thriftbooks.com User , 17 years ago
I wanted to read this book because I've just moved to Holland and wanted to get insight into tulips, painters, Amsterdam, etc. Moggach has done a lot of research to weave in 17th century Amsterdam, how people lived, the different professions of the day, as well as insight into tulipmania. The tulip auctions were the beginning of futures trading. And markets are fueled by greed and fear. This story has a lot of twists and turns. To appreciate it, one must see it from the perspectives of different characters - which Moggach uses to title each chapter. See my extended personal review on http://www.analyticalQ.com/books/default.htm - link to http://www.bonjournal.com/entries/j040515.htm I am looking for more books like this - in English - about life in the Netherlands - to read and write a review.

Published by Thriftbooks.com User , 17 years ago
This story is full of interesting facts about the beginning of the mercantile age. It is also a story about human greed and lust and the way such sins are our downfall. It makes a nice companion to Girl with a pearl earing.

A Rich Feast of Words

Published by Thriftbooks.com User , 19 years ago
I loved this book to the hilt. After reading Girl in Hyacinth Blue, Tulip Fever was the icing on the cake of historical fiction and art as the theme. The Players:Cornelius: The wealthy old merchant in Amsterdam. Sophia: His young wife wanting more than wealt and riches. Jan: The young painter hired by Cornelius to paint the couple and immortalize them. Maria: The maid of the family with secrets' of her own. The one who knows all and sees all. Willem: Maria's LoverJacob: Jan's apprenticeGerrit: Jan's manservantTulip: The center stage of the entire story. As sinful as ever. So these are the characters and the story takes place in 17th century Amsterdam, where tulips are a madness, where love is sometimes adulterous, where there is a yearning for a child, where there is betrayal, crimes of passion, blackmail, gamble, dreams, and no conscience. This book kept me awake as I flipped the pages that revealed the genius of Ms. Moggach. With every chapter and every character introduced, Ms Moggach provides the readers with a tapestry so magnificient and amazing - that sometimes the locale just fades into background. The tulips hog the limelight for most part of the tale with the players and the description is beautiful. Before you know it, you wish that this story would not end. A must read for all those who like literary page turners!

Published by Thriftbooks.com User , 20 years ago
I absolutely loved this book. Tulip Fever was a vivid and engrossing read that had me turning pages into the wee hours of the morning. And while some feel this novel is only a Harlequin Romance in disguise, I truly believe it is much, much more than that. The 1630s Amsterdam background lends rich definition to the characters and story line and makes Tulip Fever a highly readable, thrilling book.Wealthy merchant, Cornelis Sandvoort, and his young wife, Sophia, have a good marriage. Sophia is ever grateful to Cornelis for saving her family from destitution, while Cornelis feels Sophia has given him another chance at life after the death of his first wife and two sons. But with there being 40 years of age between them, Sophia feels, no matter how grateful she is, that she has traded one life of imprisonment for another. The couple is childless despite Sophia's dutifulness, and in the hopes of achieving some sort of immortality, Cornelis has commissioned young, passionate artist Jan van Loos to paint their portrait.During their sittings, something transpires between Jan and Sophia. Their love for each other becomes frantic, like another form of life support. Desperate to be together, Jan and Sophia concoct a devious plan. Lies, lust, greed and the dizzying passion of the tulip craze create an intoxicating and dangerous mix. What ensues after is the devastating windfall of their deception and selfishness.Very intense and fast once the love affair begins. Each chapter is narrated by a different character so readers are treated to the minds of all involved. I believe Deborah Moggach has written a solid, deftly written piece of fiction. Although there are bits of Harlequin-ness, the historical references; allusions to actual Dutch paintings; sharply defined characters; and lush, vivid backdrop surely make up for it. An exceptional and sensuous feast for the mind.

Published by Thriftbooks.com User , 21 years ago
I find Kirkus reviews to be the most reliable, but they certainly have missed here. Far from being "pallid," the book is full of passion and suspense (the NY Times said it "reads like a thriller"); and the plot that is called "outlandish" is based on an idea that has historical precedent. I was totally engrossed in this book, as were my wife and a friend. We all agreed that the clichés "page turner" and "couldn't put it down" were true in this case. The scene with the "onion" is unforgettable and the depiction of tulip speculation is revelatory. Don't allow the Kirkus sourpuss to keep you away from a novel that is both entertaining and educational.
Copyright © 2020 Thriftbooks.com Terms of Use | Privacy Policy | Do Not Sell My Personal Information | Accessibility Statement
ThriftBooks® and the ThriftBooks® logo are registered trademarks of Thrift Books Global, LLC