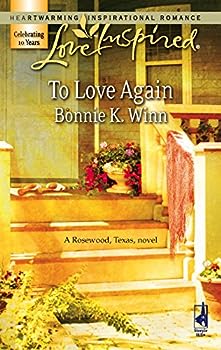 (Book #3 in the Rosewood, Texas Series)

This description may be from another edition of this product. She wasn't going to take "no" from anyone anymore, especially not her late husband's rude business partner. Determined to provide for her two children and prove she wasn't the weak woman her husband...

Published by Thriftbooks.com User , 12 years ago
This is the third book that takes the reader to the fictional small Texas town of Rosewood and it's an excellent portrayal of a single parent trying to make a new life for herself and her children. Laura is determined to learn the ins and outs of flipping houses; however, reading this book in 2009, after the great housing bubble burst, it's hard to feel sympathy for realtors or real estate agents or even mortgage brokers. Anyhow, Laura is left with little funding of her own after her verbally abusive husband Jerry dies, so she packs up her kids (ages 13 and 10) and moves to Rosewood, where she meets Paul, her late husband's friend and business partner. The citizens of this Christian utopia adopt her as one of their own but Laura still harbors vague fears of losing everything. Her overbearing, social climbing in-laws move to Rosewood, ostensibly to be near their grandchildren, but their motive is more sinister: they file for sole custody. This subplot is why the story of Ruth and Naomi doesn't apply well to Winn's novel: Naomi is an older woman who leads Ruth to God. In the book, Laura's mother in law Meredith isn't a woman of God; she's a materialistic, self-centered, social climbing shrew. Sorry, but there's really no comparison. Winn, however, does handle the subject of spousal abuse well. Having lived in a marriage like that, I identified strongly with Laura's feelings at several points in the story. Winn's characters are, for the most part, realistic and human. Noah and Grace Brady (from Winn's other novel "Promise of Grace") show up briefly as minor characters. All in all, Rosewood is a nice place to visit and re-visit.

Published by Thriftbooks.com User , 13 years ago
..however,in real life (yes,I know this book is fiction),it's ok to practice tough love sometimes,and in fact it's completely called for at times,depending on the situation.In the case of the grandparents,I would have stopped all visitation until they agreed to group therapy (by that I mean the mother and grandparents,seeing the same counselor),so that everyone could be on the 'same page' as far as the children are concerned.If they refused,then so be it.They aren't interested in the best welfare of their grandchildren.(In real life,there are no 'grandparents laws' anymore).I believe in second chances,too,(I enjoyed what the author had to say at the end) but this is just something I wanted to point out.No one should be deprived of accountability,and that includes grandparents as well.(no pie throwing from the grands,pls). Grandparents are just a susceptible to mistakes as anyone else,and shouldn't get a pass for it. I just wanted to point out that Christian doesn't = doormat in this case,and in REAL LIFE,this would *not be the best approach.God certainly holds us to accountability,especially where the welfare of children are concerned. Overall,it's a good book.

Published by Thriftbooks.com User , 14 years ago
Bonnie K. Winn's To Love Again is a heartwarming inspirational romance with a contemporary reflection on the biblical character of Ruth in the life of a widow and mother whose dead husband was abusive and whose mother-in-law continues to try to control her life today. Bonnie K. Winn's To Love Again is well-written, heartwarming, and would appeal to the newly converted as well as many shades of faith maturity. Conflicts are well developed from a faith and literary viewpoint. The absence of graphic details makes this book a good choice for a wide ranged age group. In addition, the book includes a short list of 10 questions to guide reading for individual readers, book clubs and church groups. Laura Manning's abusive husband Jerry has died. She has been left with little financial support and what she does have is controlled by others by the terms of her husband's will. In order to support her children, she must find her independence, a job and most of all courage. When she moves her family from the Houston to the small town of Rosewood, Texas, Laura is faced with new challenges. She must rebuild her life in a new town and deal with her husband's best friend and his parents who thought Jerry was a saint. Winn's book outshines many other inspirational literature in many ways. First, the theme of spousal abuse, often ignored in Christian literature, is well-written as part of a character's past and present throughout the novel. Even better, the romance and the heroine's potential is not limited to a label from that experience --- which can be the other tendency once the very topic comes up. To Love Again is a romance, not a psychological treatise, and Bonnie K. Winn uses the theme and develops it without getting weighed down so as to lose the romance. Secondly, unlike some Christian literature, Bonnie K. Winn does not create stiff one dimensional black and white characters. By including shades of grey, Winn increases the inspirational aspect of this romance in portraying a more realistic and thus more heartwarming image of everyday life of a person of faith in a small town. Finally, who would not love Winn's reflection on the biblical character of Ruth, in a completely different and modern context! Winn's literary reflection creates some very nice twists and developments on this biblical theme throughout the book. In my opinion, this is the best aspect of her romance as inspiration. This book is best read with Winn's other Rosewood, Texas novels where the stories of the secondary characters are told. Without that context, some of the secondary characters appear somewhat flat. Otherwise this novel is a fun read as a stand alone.
Copyright © 2020 Thriftbooks.com Terms of Use | Privacy Policy | Do Not Sell My Personal Information | Accessibility Statement
ThriftBooks® and the ThriftBooks® logo are registered trademarks of Thrift Books Global, LLC