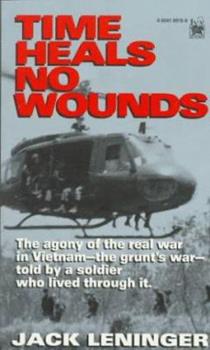 by Jack Leninger and Jack Lenninger

Jack Leninger spent a year humping the boonies as a rifleman in the 4th Infantry Division. Through air strikes, firefights, and ambushes, he fought the grunt's war, the war the base-camp commandos never saw. With operational reports, eyewitness accounts, journals, and photos, Leninger captures the terror and chaos of Vietnam in all its electrifying intensity. The living nightmares behind the headlines and TV news are all here, the tragic mistakes,...

Best War Book That I Have Ever Read

Published by Thriftbooks.com User , 18 years ago
Time Heals No Wounds is seriously, the best written war book that i have ever read. It gives the accouts of a real ordinary grunt during the Vietnam War. It shows that wars do not have Rambos and other heros, but are really just fought mostly by kids in there twentys and even their late teens. I would recommend this book over any other vietnam book; you name it, and Time Heals No Wounds is better. I believe that everyone who wants to know about Vietnam should read this book.

Published by Thriftbooks.com User , 21 years ago
A powerful book about the tradgedy of the Viet Nam war from the grunt's point of view. In knowing the author, I had an indepth sense of the losses he suffered. An outstanding book for ex-soldier's, history buffs, or anyone that wants a real story of a bad war.

Published by Thriftbooks.com User , 21 years ago
Jack Leninger shows a remarkable aptitude for clarity and candor in relating his story... As I read this incredibly accurate account of his year 'in the bush', the memories returned, and with them, the faces of those who shared those often frightening and always intense times... It's a tribute to Jack as a writer that he was able to memorialize his Friends and fallen Comrades so honestly, and in remembering them, to give them a kind of immortality that would otherwise have eluded them in their all-too-short lives... Welcome Home, Jack ! Tim Murphy Co.B, 1/12 - "LT"

Published by Thriftbooks.com User , 21 years ago
Reality is drama served on a silver platter. Especially if the reality is that of your own flesh and blood. I am proud of Jack Leninger for his service to this blessed country and even more so by coming to terms with his own reality by writing the painfully truthful book of his personal testament to everything that he feels is (or should be) right. The book strikes a nerve to all who read because of the no nonsense blunt truth that he's never ashamed of conveying. With that cynically clever humor that seems to run in the family. I can't wait for the next one...

Morters, bullets, friendly fire. It is all in this book.

Published by Thriftbooks.com User , 22 years ago
When I got to the central highlands of Vietnam I took over a squad of ten men. There were only three left when I got hurt and we got a couple of replacements around January 1, 1969. Jack was my radioman. Even 'tho I was there, the book reads like a nightmare that could never have happened. This is an all too real account of what happened in the area from Kontum to Plieku. April 28, 1969 "Call Six and tell him this is not a good palce to stop." That was the last thing I said to my radioman, Jack Lenninger. The steep hill became alive. Everything came sliding downhill. Would the dud 500 pound bomb go off? Would the 125 feet tall tree, ten feet thick roll over us? Or was the whole rockslide started by the NVA with a firefight waiting for the survivors? To see who makes it, who goes out in a bag, and who needs a medivac chopper you have to read the book "Time Heals No Wounds" by Jack Lenninger. Ssg Kenneth Henkel
Copyright © 2022 Thriftbooks.com Terms of Use | Privacy Policy | Do Not Sell My Personal Information | Accessibility Statement
ThriftBooks® and the ThriftBooks® logo are registered trademarks of Thrift Books Global, LLC