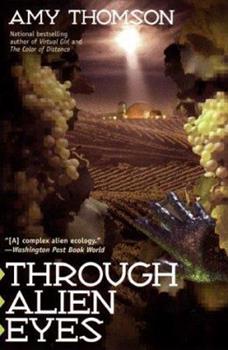 (Book #2 in the The Color of Distance Series)

The John W. Campbell award-winning author of Virtual Girl offers an eyewitness account of "a complex alien ecology" (Washington Post Book World) in her stunning new novel. Amy Thomson captivated... This description may be from another edition of this product.

Published by Thriftbooks.com User , 20 years ago
Amy's writing gets even better as she moves along with this second story of Juna Saari. I actually enjoyed this second volume more in some ways than the first, although both are excellent. Amy continues to explore the differences and similaries between the Tendu and humans in a thoughtful and touching manner. For those reviewers below who felt otherwise, I say: "Hey, folks, lighten up." Everybody has differences in the types of works they enjoy reading, and I, for one, thoroughly enjoyed "Through Alien Eyes."

Published by Thriftbooks.com User , 21 years ago
A good follow-up to 'The Color of Distance', although not as strong. There were more noticeable plot elements that were hard to buy. One thing I found particularly unbelievable was the character of Bruce. In the first book, he is portrayed as a caring, understanding and giving person who doesn't judge the Tendu on human values. In this book his character does a complete 180. He's a selfish, close-minded, bigoted jerk. This Jekyll and Hyde personality was distracting and has hard for me to swallow. I felt like smacking the character on the head. I guess this change was required for plot. The implications of Tendus' ability to heal and extend lifetime on human society was touched on by the author, however, I think the impact of the Tendu was downplayed much more than would be the case. Overall, this book makes a good follow-up and worthy of a read. Several plot lines remain open for a possible continuation.

A sequel worthy of the first book

Published by Thriftbooks.com User , 22 years ago
This sequel to "The Color of Distance" was certainly a book that lived up to the high standard set by the first book. It portrayed a human reaction to aliens among us, complete with the fears and the terra-centric views we all hope we'd not have as a species, but know are all too likely. Another book I was unable to put down. I await a sequel to this with baited breath.

Published by Thriftbooks.com User , 22 years ago
This seemed like a very realistic story about the views and politics that would occur if aliens with a lower technology level were to visit us. It also dealt with the general public attitudes that might prevail. All in all a good story, but the ending seemed more like a finished chapter than a book ending, almost as though the author had meant for the book to be a little longer. It seems like there will be a 3rd book. I look forward to it.

I enjoyed it very much

Published by Thriftbooks.com User , 22 years ago
You can read the other reviews to get a synopsis but the feeling I was left with was that the author has concentrated on the feelings of the various characters. I mean there's action and plot but the reader sees the motivation behind the action.   I've been reading science fiction for a long time and I was comparing this story to the days of Heinlen and Clarke where the biggest ray-gun won the day. Here, the conflicts are on a personal level and they get solved, not with some bigger, better, faster, stronger invention, but with people trying to reach an understanding.   It reminded me a little bit of Cordwainer Smith. He's an early sci-fi writer that used biological solutions when all of the other writers were using whiz-bang, high-tech hardware to save the day.   Thomson doesn't go into medical detail about how the Tendu achieve 'allu-a' (sort of a mind-meld), for example, but she does explore some of the aspects of a joining/sharing and how it would affect those involved.   All in all, I liked the story. This is the second book in the series and I read it before the first (I hate it when that happens). Now I have to find a copy of "The Color of Distance"
Copyright © 2022 Thriftbooks.com Terms of Use | Privacy Policy | Do Not Sell My Personal Information | Accessibility Statement
ThriftBooks® and the ThriftBooks® logo are registered trademarks of Thrift Books Global, LLC