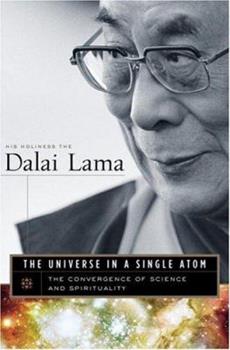 The Universe in a Single Atom: The Convergence of Science and Spirituality

Galileo, Copernicus, Newton, Niels Bohr, Einstein. Their insights shook our perception of who we are and where we stand in the world, and in their wake have left an uneasy coexistence: science vs.... This description may be from another edition of this product.

Published by AE , 2 years ago
Probably the best book about science and spirituality out there. The Dalai Lama is so powerful in his presentation, for me, the methods work - he comes off humble, inquisitive, positive. It is moving. I am currently reading The Self Aware Universe, so we'll see if that can compare. This is absolutely one of the best books I've ever read.

A Beautiful Book That Really Delivers On Its Title

Published by Thriftbooks.com User , 16 years ago
Many people feel that one of the really important issues facing us all, is whether it is possible to find some middle ground between science and spirituality, or whether they are simply different experiential and philosophical categories that have no business trying to get together. For over thirty years, the Dalai Lama has been at the forefront of efforts to find a rapprochement between the insights of Buddhism and the discoveries made using the scientific method. His journey has led him to have detailed discussion with some of the finest minds: the late David Bohm, John Eccles and Karl Popper to name just three. This is without doubt the clearest and most accessible of the Dalai Lama's books examining the relationship between contemporary Buddhist thought and Western science. There are many gems in here, but there are one or two of particular importance. I still hear people translate the term "Karma," as "Fate," or as a law of causality. The author makes it clear that karma means "action," and he clearly differentiates it as the mechanism by which an intentional act will reap certain specific consequences. Karma refers to the intentional acts of sentient beings. The book is full of such insights. It is an easy read and is both an overview of a number of critical areas in current scientific research and a spiritual interpretation and synthesis. This is not just a book for Buddhists, but for anyone interested in the broader issues of life and the Universe. Highly recommended.

Published by Thriftbooks.com User , 17 years ago
--I'd like to add another five-star vote for this gentle, insightful book. It's a gift for everyone. --The Dalai Lama has been interested in science since childhood, and has collaborated with some of the best minds in science and psychology for many years. This book gives some perspectives on that collaboration. The author discusses evolution and consciousness, "karma" and causality, how we may improve reliability in knowledge, how we can manage unprovable concepts we believe to be true, how a refined Awareness can be used to help understand our mind and consciousness, a Buddhist perspective on genetic engineering, and above all else, the benefits of combining Wisdom and Compassion. The author notes that scientists, too, can and should add wisdom and compassion to their knowledge, and suggests they not just let their discoveries be managed by political leaders, lawyers, bureaucrats, financiers, or the media (gulp!). The author also warmly introduces us to his educational background and gives marvelous insights into classical Buddhist and Hindu views of issues that still intrigue Western philosophers and scientists. He also discusses why we may encounter a "dual nature" of truth -- for instance, we are innately comfortable with a classical explanation for everyday events even when we know that we encounter a profoundly non-classical reality at the atomic or psychological level. This book makes a superb addition to all the wonderful books on quantum science, cognitive science, and cosmology. --In my opinion, BY FAR THE MOST VALUABLE GIFT OF THIS BOOK is the irreplaceably valuable perspective of a credibly Wise Human Being. One significant difference between valid science and spirituality is that science focuses on Knowledge while the spiritual approach seeks Wisdom (which includes compassion and ethics). Both should use integrity to seek truth. Because this latter goal is shared, many scientists (including atheists) respect one such as the Dalai Lama and have been more than eager to share their insights with him (I attended a recent medical conference and more than one leading scientist said that amidst all their years of honor and success in highly competitive and intellectually demanding fields, the chance to discuss their views with the Dalai Lama was the high point of their lives). The Dalai Lama does not have a technical degree, he may not have published in a peer-reviewed scientific journal, and his knowledge of mathematics is not great, but he provides an irreplaceably valuable perspecitve -- a credibly wise, humble, and compassionate human being who embraces, understands, and appreciates scientific knowledge. It's not always an easy read, sometimes you have to suspend your judgment for a few pages, and you won't agree with everything but it's a remarkable book. --Those interested in spirituality should also find an appreciation of scientific knowledge will enrich their practices and their understanding. For instance, the author gi

Published by Thriftbooks.com User , 17 years ago
Many have written LONG reviews so I will try my best to contain my impulse to break off into rants. Pros: Very well written, great arguments, and very thorough. The argumentative styling of this book is honest. The reason I choose that specific word is that its so easy to be biased and omit opposing arguments. This book is not written to convince anyone of anything, its merely presents what we know to be 'most likely truths' as well as counter points from different schools of thought and lets the reader make the conclusions. Its not a 'socratic method' of answering a question with a question as much as its a great teachers way of helping you to explore yourself. This book covers most if not all the bases of modern science and relates it the core teachings of buddhist philosophy. For those that misconstrue buddhism to be a 'hippie religion,' this book should put that view to rest. Cons: -Although the aim is to have a mass amount of people read this book, I am quite certain that an average 'layperson' will drop this book in confusion after about 1 page. -For those of us that have studied genetics, theories on evolution, physics, einstein's theories of relativity, quantum mechanics, mahayana buddhism, or any theory on consciousness, this book serves as an AMAZING 'tie in' to all these in depth subjects. HOWEVER, for a person that has never really studied any of these topics this book will probably confuse them beyond belief. Summary: Very well rounded and thorough. Amazingly well written with a high dialect. Filled with fantasic insight and wonderful 'middle ground' for a religion that emphasises the 'middle way.' Its almost poetic justice in that sense. However this book is not an 'intro' book. This is a book you read AFTER you have an understanding of basic genetics, quantum mechanics, and buddhism.

A Positive Interface Between Science and Religion

Published by Thriftbooks.com User , 17 years ago
I am generally not impressed by theologians who discuss science (or conversely scientists who discuss theology), because usually these written discussions contain a major propaganda component. On one hand you have those would discredit science and replace it with a biased system full of pious presuppositions, and on the other hand those who would dismiss religion as not supported by the "facts" and thus irrelevant (and perhaps caused by a defective "god gene" that worked to make Pleistocene tribes more cohesive, but has little relation to the modern world.) I have to say in this context that I am most definitely impressed with the Dalai Lama's new book "The Universe in a Single Atom." This was written by a "simple monk" who has more understanding (despite his admitted failings in mathematics) of the basic questions than many theologians or scientists. I may disagree with him in some parts of his arguments (especially in regard to some of his doubts about evolution), but I can not deny his basic openness and willingness to adapt his views as our understanding of the universe and life expands. I only wish there were more like him! Science and religion probably should function as separate Magisteria (as argued by Stephan J. Gould), but they can have points of contact as long as one does not try to consume the other. The Dalai Lama states that some claims of religion (he speaks for Buddhism specifically) may have to be abandoned because of some modern findings of empirical science. At the same time he feels that science should not dismiss religion as irreverent to human endeavor. Science has little to tell us about how to live and religion has little to tell us about the exact details of the structure and development of the universe. This is simply speaking one of those rarities, a good book written by a "personality." But what a remarkable personality! His understanding of the basic structure of philosophical and scientific arguments is astounding for a person who lived the early years of their life mostly in the remote mountain country of Tibet. He articulates difficult concepts of space, time, physical law and biological science very well, while always prefacing his remarks with a humble phrase such as "As I understand it". After a big dose of arid pronouncements by arrogant "personalities" in both Magisteria this is like a refreshing rain shower! I recommend that anyone interested in the intersection between religion and science read this book. It is a major positive antidote for the "Conflict between Religion and Science" that seems to be the main media event of the day. Not everyone is an unreasoning self-seeker.

Published by Thriftbooks.com User , 17 years ago
There are many wonders to be explored in the parallels between Buddhism and scientific inquiry into the nature of reality, life and consciousness. As you read this book, your thoughts ride a rocket of insight into the contentious and often disappointing debate between scientific theory and spirituality that seems to be paralyzing our society today. And yet the text never flaunts a particular conceit or takes on the aggressive, often brutal nature of the debate. While the parallels explored are startling and inspiring, most wonderful of all is the critical mind, engaging personality and boundless curiousity of the Dalai Lama himself, as these qualities radiate from the text. Reflecting on his theme, the Dalai Lama illuminates at least a view if not a way through the contention and confusion. He writes: "There is more to human existence and to reality itself than current science can ever give us access to.... By the same token, spirituality must be tempered by the insights and discoveries of science. If as spiritual practitioners we ignore the discoveries of science, our practice is also impoverished, as this mind-set can lead to fundamentalism." It is truly revealing that a man at the heart of a very traditional spiritual philosophy and practice can shed the burden of dogmatic thought for an open dialogue and the exciting and affirming human capacity to seek truth. Between science and spirituality, between the knowable and the unknowable, the critical thinking and spiritual insight of the Dalai Lama inspires the belief that open minds and open dialogue are not beyond either our scientific thought or our spiritual belief. This book is one of the most spiritual testaments while coincidentally being a highly accessible exploration of great scientific advances and current research. It is a book I will return to again and again.
Trustpilot
Copyright © 2022 Thriftbooks.com Terms of Use | Privacy Policy | Do Not Sell My Personal Information | Cookie Preferences | Accessibility Statement
ThriftBooks® and the ThriftBooks® logo are registered trademarks of Thrift Books Global, LLC