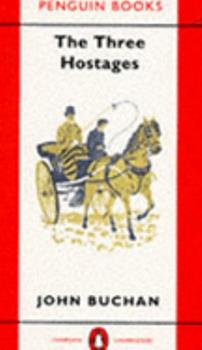 (Book #4 in the Richard Hannay Series)

This description may be from another edition of this product. After distinguished service in the First World War, Richard Hannay settles into peaceful domesticity with his wife Mary and their young son. However, news comes to him of three kidnappings. With no...

Published by Thriftbooks.com User , 20 years ago
Kudos to Wordsworth Classics for keeping these four books in print -- affordable, too! I've now read all but one of the Hannay adventures (this one, plus "39 Steps" and "Mr. Standfast") and thoroughly enjoyed them all. "Hostages" moves a bit slower and doesn't have quite as much "local flavor" as the others; but it's a fine book, with much to recommend it and much to remember. I enjoyed especially the respectful portrait of Hannay's wife, every bit as smart and tough as he -- quite surprising in an era (and culture) that I had assumed would be somewhat chauvinistic -- and a real relief from other spy stories in which the women simply scream helplessly until The Man comes along. Mind you, I have no political agenda -- and indeed am quite conservative about gender roles; but I just find it so much more sensible and realistic when women characters act like human beings!"Hostages" is also remarkably prescient about the onset of WW2, and how Hitler would try to rule the world not merely through brute force but through propaganda and mass hysteria. There is also some fine thematic development here, esp. the notion that a spy mission may achieve "success" without "victory."But the best thing about the book is its final chapter; as in "Standfast," "Hostages" has a split climax; the main conflict is resolved about 35 pages before the end of the book, and then there's a further, more nitty-gritty, down-to-earth duel at the end. Fantastic!These books are great for folks looking for good old-fashioned adventure like James Bond, but without the girls and the violence.Highly recommended.
Copyright © 2020 Thriftbooks.com Terms of Use | Privacy Policy | Do Not Sell My Personal Information | Accessibility Statement
ThriftBooks® and the ThriftBooks® logo are registered trademarks of Thrift Books Global, LLC