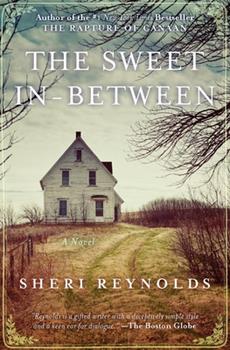 #1 New York Times bestselling author Sheri Reynolds continues to captivate in this masterful tale of redemption and finding a place to truly belong. Kenny Lugo has grown up in a family that's not really hers. Her mother died of cancer when Kenny was very young, and Aunt Glo-who is, in fact, her daddy's girlfriend-took her in when her father was sent to jail for drug trafficking. Now, as Kenny approaches her eighteenth birthday and the end of the government...

Published by Thriftbooks.com User , 13 years ago
Sheri Reynolds allows the motivations of her characters to unfurl, crafting a complex story about three-dimensional people, all completely and devastatingly human. It is a story about family, about acceptance, about safety. It is a story that haunts long after the book is closed. I still want to go back and save Kenny. Janine Latus author of If I Am Missing or Dead: A Sister's Story of Love, Murder, and Liberation

Published by Thriftbooks.com User , 13 years ago
Sheri Reynolds has a true gift for pulling you into her characters and never letting go. If you can read this book and not ache to hug "Kenny" and tell her everything will be all right, not brace to fight anyone who does her wrong, not yearn to know how she's doing now, then fine character-driven tales are wasted on you.

Published by Thriftbooks.com User , 13 years ago
The Sweet In-Between I LOVE Sheri Reynolds books. This woman can write a story, spin a yarn, tell you like it is. She is entertaining and down to earth, she knows the human heart, she can make you laugh and make you cry. We meet Kendra - "Kenny" - who is living with her "Aunt" Glo, who is actually her dad's girlfriend. Her dad is in prison and her mom is dead. Among the starring cast of characters are the children of Aunt Glo -- her sons, Quincy and Tim-Tim and her grandaughter, seven year old Daphne. Daphne's mom, Constance, Aunt Glo's daughter, has taken off and is on the road to destruction. Constance is into heavy drug use so Daphne is being raised by her grandmother. And let's not forget Tim-Tim's girl, Sneaky. She is also a great character and quite an addition to the family. And little Daphne? That girl can cuss like a trucker, all the while playing with her dolls. Kenny loves her family. She misses her mom and her dad. She hates visiting her dad in prison and tries to get out of going every time they are allowed to visit. She worries about everything, but mostly she worries about Aunt Glo kicking her out when she turns 18. So, she decides to make herself the best person she can be and to always be there for Aunt Glo. She helps around the house, works hard, does whatever Aunt Glo asks/needs her to do, babysits Daphne, trying so hard to prove herself a necessary part of the family. Kenny also has mixed up feelings regarding her sexuality. She hates her body and binds her chest up daily with Ace bandages, along with wearing her hair super short. She is the target of much bullying and is picked on at school constantly. She refuses to use the ladies room while at school. There is one teacher at her school who sees Kenny for the kind, sweet person she really is and this teacher reaches out to Kenny via a camera and having her assist in working on the yearbook. The book opens with a murder taking place right next door to Aunt Glo's. Two college-aged girls mistake the other half of the duplex for a home they rented and tragedy strikes. This deeply affects Kenny and everyone else at Aunt Glo's home. This is a WONDERFUL book. Kenny is one of the best characters I have met in a long time. Kenny is such a caring, loving, giving girl, just trying to do the right thing and love her 'family'. She is so confused and really has no one to turn to and talk with to help her through her many questions about her body and her life. This family is poor and struggling and almost trashy, but they all love and care for each other. Miss Reynolds writes with such genuis that you can see the mildew and mold growing around the bathtub. You can see the smoothness of the water where the family is fishing. You can see poor Kenny struggling with the Ace bandage that she binds herself with. Such talent! Such a great author! Such a good book! Miss Reynolds has written other books and they are: Firefly Cloak A Gracious Plenty The Raptur

Published by Thriftbooks.com User , 13 years ago
The main character in this book, Kendra (Kenny) is immediately likable in her enigmatic way. Her ability to survive and cope under a series of life altering circumstances makes the book a thought provoking page turner. Great/fast read. I loved it.

Published by Thriftbooks.com User , 13 years ago
In Virginia seventeen year old Kendra "Kenny" Lugo fears the near future. Her mom died years ago of cancer and her dad is serving time. She lives with her dad's girlfriend "Aunt" Glo who has two kids of her own (tweener Quincy and teen Tim-Tim) and her seven years old granddaughter Daphne, dumped on her by her oldest child. Glo survives her responsibilities thanks in part to prescription pain killers. Kenny fears Glo will kick her out of her home once she becomes an adult, which is soon. The teen also struggles with identity issues especially hiding her feminine body. When their alcoholic neighbor Jarvis Stanley accidentally kills a college girl, Kenny obsesses over the deceased as her morbidity makes her believe Glo will kick her to the curb soon. Her plan is to soon become responsible and dependable; Glo will beg her to stay. Told by the frightened Kenny, THE SWEET IN BETWEEN is a fascinating family drama starring a frightened teen filled with anger, remorse and fear. The rest of Glo's extended family is fully developed characters who enhance the at times subtle and other moments in your face story line. However, this is Kenny' tale as she sadly expects the worse but hopes for the best, which in this case is not being kicked out of the only shelter, albeit a relatively poor one, she knows at a time she wonders why she feels different from girls her age. Harriet Klausner
Trustpilot
Copyright © 2022 Thriftbooks.com Terms of Use | Privacy Policy | Do Not Sell My Personal Information | Accessibility Statement
ThriftBooks® and the ThriftBooks® logo are registered trademarks of Thrift Books Global, LLC