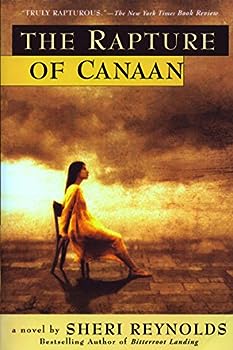 The Rapture of Canaan

At the Church of Fire and Brimstone and Gods Almighty Baptizing Wind, Grandpa Herman makes the rules for everyone, and everyone obeys, or else. Try as she might, Ninah hasn't succeeded in resisting... This description may be from another edition of this product.

Published by Thriftbooks.com User , 19 years ago
Sheri Reynold's Rapture of Canaan title gave me the initial imporession it would be a 'hardship' survival, tell all book about an excape from a cult. It was totally unexpected when I started to read a story about a young girl and her life within this 'self-developed' sect, her comfort in growing up with her immediate family, under the strict guidance of her preacher grandfather and her story-telling grandmother. Her entire family showed that they loved her and other members of the family within the sect and even though their life-style might have been considered 'harsh' by outsiders, they felt they lived a 'good' life. The young protagonist's 'surprise' pregnancy came about from the Church and her parents failure to communicate properly to her about the birds and bees and her misinterpretation of the "Rapture" the members of the church were constantly seeking. There is death and sadness, happiness and love, events that occur for the better and worse, but the entire story is beautifully written. I couldn't put the book down, the story line was so interesting and didn't want to wait to see 'what happened next.' This book would be a very good read for anyone looking for a good story that emphasizes family love and devotion in the face of life's hardships.

A must-read novel about faith and freedom...

Published by Thriftbooks.com User , 20 years ago
Rapture of Canaan is an honestly good book. A highly engrossing tale about an extremely religious commune and the severity of their faith. A novel of sharply-crafted twists and turns and one that will play with your emotions. This is a story of one girl's faith in her church and in God and her struggle to balance freedom within the iron walls of the world in which she lives.Grandpa Herman, founder of The Church of Fire and Brimstone and God's Almighty Baptizing Wind, has a flock to tend to -- his congregation, where some mimic Herman's steadfast and unnerving faith, and some who occassionally stray from the righteous path. And perhaps the most surprising stray of all is his granddaughter, Ninah. Twelve-year-old Ninah, who finds difficulty in controlling her first adolescent stirrings, manages somehow to twist them and convince herself the things she does with her prayer partner, James, is nothing more than learning about Jesus's love through each other. And once the community finds out, the whole system of the Church is shocked to a halt. "The wages of sin is death," says Grandpa Herman. The story plays out wickedly as the truth of Ninah's transgressions plummets to an end....The rapture has come. The Rapture of Canaan is a powerful and stunning novel. Shari Reynold's prose is a tapestry of faith, religion, fear, sadness, life and death, all woven to create a picture of a cult-like existence and how it effects those in which it governs. A truly page-turning saga that expresses the all-encompassing love for Jesus and the trials of a girl finding her way. An uplifting and frightening mix. A great read.

Growing up amidst religious extremists....

Published by Thriftbooks.com User , 21 years ago
THE RAPTURE OF CANAAN revolves around a young teenage girl, Ninah Huff and her life in the "compounds" of the Church of Fire and Brimstone and God's Almighty Baptizing Wind. The church itself was founded by her grandfather, Grandpa Herman (her mother's father), and Grandpa lays down the law for all those who live within this rather extreme religious group.She and all the others live a very segregated life, away from the modern world. They are not allowed to associate with others outside their faith, including other Christians who are not deemed as good and pure as they are. They live strictly by the bible as Grandpa Herman reads it, and are punished for the slightest "sin", no matter how little or trivial the sin is. They are not allowed to take medication or see doctors, they work in the fields and raise their own food,and they are not allowed to touch persons of the opposite sex, including their fiances, until they are married. As Ninah grows older, she starts to question the practises of her group. She keeps these thoughts to herself, but confides a little with her prayer partner, James, who she has had a crush on for some time. He reciprocates her feelings, and soon they start to "sin" during their prayer time together, believing they are making love to Jesus through each other.Ninah eventualy finds herself pregnant, and her world turns upside down. She is punished for her behavior (dunk under water in the river, irregardless of her being pregnant) and it is amazing that she and her baby arent' harmed by this treatment. Soon the church is divided, with one side backing Ninah and appalled with the harsh treatment her grandfather instructs to be directed at her. She is not allowed to see anyone during the rest of her pregnancy, and without her permission her baby is taken away from her. The rest of the church believe that Grandpa Herman is doing the right thing by using Ninah as an example and showing the others how they should live without sin, else face the consequences. I highly recommend this book. The content of the story may be a bit extreme for some, but I found that I could not put this book down.

Published by Thriftbooks.com User , 21 years ago
Last summer, I purchased this book to fill my hours while traveling and I still think it was one terrific read! Although this story depicts fanatical religious zealousness with abuses, torture, and mind control, I oddly did not find this book to be depressing as the reader in Memphis did. The reader peeks into the mind of a young girl in this cult and sees what makes her tick... how she can emotionally survive under such control. This haunting story is related by the young girl, Ninah. Her courage and the kindness and perspective of her grandmother show the strength of the human spirit. I found myself drawn in and identifying with the heroine, and at its satisfying conclusion, filled with buoyant hope. Rich with symbolism, this story reads quickly and yet has depth and humor. The characters stayed with me long after the book ended. Like all good novels, I wished the book would go on and on. I will gladly try another of Reynolds books ... and would certainly continue to recommend this one!

A book that has affected me and my thoughts on religion.

Published by Thriftbooks.com User , 23 years ago
I picked this book up unaware that I wouldn't be able to sleep or eat until I'd read the last word. No bed was made, no meal cooked... I just read. I found myself at three in the morning dapping my eyes as I struggled to read through lenses smeared with tears. I came to the conclusion that like love, religion should uplift us. It made me think of all the fire and brimstone churches I was raised in and I found every word and deed believable. The ending was one of the finest I can remember reading in years. The way Reynolds interwove the groups belief in the Rapture and her doubt of the hysterical beliefs of the congregation (family) shows her inner growth from tragedy. When the conclusion came in one swift slash, it was like commonsense winning the day. Need I say I loved it and recommend it to everyone.
Trustpilot
Copyright © 2022 Thriftbooks.com Terms of Use | Privacy Policy | Do Not Sell My Personal Information | Accessibility Statement
ThriftBooks® and the ThriftBooks® logo are registered trademarks of Thrift Books Global, LLC