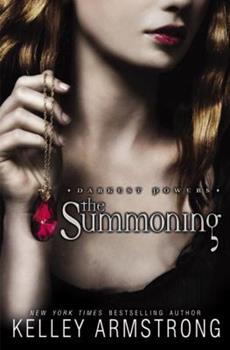 (Book #1 in the Darkest Powers Series)

My name is Chloe Saunders and my life will never be the same again. All I wanted was to make friends, meet boys, and keep on being ordinary. I don't even know what that means anymore. It all started... This description may be from another edition of this product.

Published by Miss.Dr , 11 months ago
The very first time I had read this book was in High School. I had read it three times and every time I would fall in love with it. Chloe is my favorite character apart from Derek. I love how it’s urban fantasy and paranormal romance.

great series for YA + adults!

Published by laur , 1 year ago
I read this book when I was about 14 and I loved it then. About a decade later I love it just as much now. Amazing trilogy and likeable characters!

Published by Drew , 2 years ago
This book got me hooked right away. If you like fantasy/mystery books you'll love this book!!

Published by Haley , 3 years ago
Honestly I wasn't expecting to love this series as much as I did. I was skeptical but I LOVE it. Very well written and the mystical elements were not cheaply done.

Couldn't Put it Down

Published by Tessa Harrington , 3 years ago
I really don't care for YA lit - ESPECIALLY when it is written in first person. I wasn't sure about the storyline to begin with, bt I think the lore of necromancers is a very understated one. it's interesting and fun to play around with and I appreciate the new spin they gave it as well as the way they amped up the powers within it. They also added in other characters with other powers, which made more intricate storylines and new problems.

Published by Thriftbooks.com User , 13 years ago
This book was drool worthy fantastic. I read it in one sitting. Absolutely spectacular. It blew other teen series like Twilight or my much beloved House of Night, right out of the water.

Definitely a series to invest in!

Published by Thriftbooks.com User , 14 years ago
What would you do if you woke up one day and saw a ghost? If you're like 15-year-old Chloe Saunders, you end up in a group home for "troubled" kids. All Chloe wants to do is get back to her normal life, but she keeps seeing ghosts, and is starting to suspect that this isn't a normal group home - and that the doctors might have something sinister in mind for all the kids. This is Kelley Armstrong's first book for young adults, and it is fantastic. With strong, witty characters and danger at every turn, this is the start of a must-read series.

Published by Thriftbooks.com User , 14 years ago
I consumed this book in one sitting... and I am looking forward to the rest of the series and how these young people get back together and grow up; and how Ms. Armstrong is going to integrate these people into the 'Women of the Otherword' and the 'Men of the Otherworld'.... I am facinated by the whole concept of reality that exists within our 'mundane' world.... More please.. :)

Published by Thriftbooks.com User , 14 years ago
Chloe Saunders is your average teenage girl. She lives in Buffalo, with her aunt and attends an art school. She spends time with her friends, talks to boys, that kind of thing. Then she meets a ghost. This ghost is terrifying and grotesque. The interaction sends her into a breakdown, which gets her sent to a group home, Lyle House. Lyle House is for mentally-ill teens who must work through their problems, or at least that is what it is advertised to be. Bizarre situations are occurring at this house, not only with herself, but also with other residents of the house. And no matter how much she tries not to believe it, Chloe sees more ghosts. Through strange events, the secrets everyone is hiding spills out, connections are made, and soon nothing is as it was thought to be. But with secrets.... there are always people who want to keep them quiet. The Summoning was unlike anything I had expected. Kelley Armstrong has managed to mix a supernatural drama with a dash of teenage angst and a whole lot of conspiracy. This novel had an underlying sense of eeriness throughout it, waiting to burst. The middle of the story did drag a little, I will admit, but the end was thoroughly exhilarating. This book was amazing and the ending left it completely open for what is sure to be a fantastic trilogy.

Published by Thriftbooks.com User , 14 years ago
From when Chloe Saunders was just a little girl, she saw ghosts. Of course then, she thought they were only nightmarish imaginary friends. And her life seemed to become almost normal when they moved out of that haunted house and after her mom died. But when Chloe hits puberty, she starts seeing the ghosts again. Now she's forced to stay in Lyle House so she can learn to cope with her "schizophrenia." But the other kids at Lyle House have also been incorrectly diagnosed with mental problems. There's a reason certain doors remain locked and there special kids are gathered in this institution. As Chloe works to uncover these sinister secrets, she starts to question everything around her, from her "schizophrenia," to what happened to her roommate who was taken away, and even to her mother's death. My first reaction after finishing this novel was WOW. Kelley Armstrong does an amazing job of connecting Chloe's past with her present and weaving the other characters' stories in as well. the story was highly suspenseful and action-packed and the exciting twists and turns kept me guessing. The novel focuses mainly on plot, so there isn't much characterization, but the suspense, secrets, and action were more than enough to hold my interest. I most definitely recommend this novel, especially to fans of the Maximum Ride series by James Patterson or the Uglies and Midnighters series by Scott Westerfeld. The Summoning will be part of a trilogy, which I am very excited about.
Trustpilot
Copyright © 2022 Thriftbooks.com Terms of Use | Privacy Policy | Do Not Sell or Share My Personal Information | Accessibility Statement
ThriftBooks® and the ThriftBooks® logo are registered trademarks of Thrift Books Global, LLC