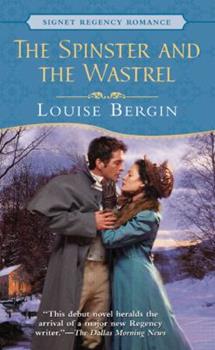 The Spinster and the Wastrel (Signet Regency Romance)

When Sir Nigel Montfort dies, leaving his estate to Miss Courtney, she establishes a school. Left out of the will, his prodigal nephew Gerard is outraged-until he learns lessons in love.

the rocky road of love and money

Published by Thriftbooks.com User , 17 years ago
I haven't read a romance novel in decades, but as a member of the spinsterhood, I found the title irresistible. The plot: The year is 1812, and Miss Annette Courtney, the thirty-year old daughter of the now deceased vicar, tries to make ends meet living in Upper Brampton village, Wiltshire, England. She sits in her brown woolen dress in the grand drawing room of Hathaway Hall, waiting to hear the reading of Sir Nigel Montfort's will, expecting to receive a small bequest. Seated in the front by the fire is Sir Nigel's tall, handsome nephew, in fashionable city attire, and a casual air. The rest of the story is predictable, and there are few surprises, but it's a light and sometimes amusing read. It is written in a crisp, clear style, with the utmost precision and correctness, and with a well integrated vocabulary. There are few repeated words, a trap some well-known authors have been known to fall into, and this would be an excellent book for women studying English as a second language. They would learn many new words, along with good grammar and punctuation, all in a pleasant and easily read book; and it's good clean fun, with very little in the way of steamy dialogue. This was Louise Bergin's first Regency style novel; it won the Royal Ascot contest, and went on to be a finalist in the prestigious Golden Heart Awards. The print is distinct and in a font size comfortable to the eyes, and the cover art is very well done, though I could not find credit given to the artist anywhere in the book.

Published by Thriftbooks.com User , 18 years ago
Sir Gerard Montfort just inherited his uncle's baronetcy... but NOT his uncle's fortune. Gerard was in desperate need of that money. He needed to pay off his gambling debts, as well as debts to a money lender. Uncle Nigel always thought his nephew a wastrel, so he willed his blunt to a charitable spinster. Annette Courtney is just as surprised when she inherits the old man's fortune. She's suddenly an heiress--and a very popular woman! Her sole dream, however, is to start a school for a local children. Miss Courtney loves children. Needless to say, Miss Courtney's interests are very different from Gerard's. Gerard will stop at nothing to get back what he believes is rightfully his... even if that means getting the spinster to succumb to his charms.I enjoyed this novel very much. It was a very sweet book. More than anything, it was a mature book. The heroine wasn't a flighty schoolroom miss. Rather, she was a mature, level-headed, intelligent, kind-hearted person. I also found myself sympathizing with Gerard. Despite his actions, he had good intentions. It was interesting to see their characters develop and grow. In the future, I'll definitely keep my eye out for Louise Bergin. Her story brightened by darker days... even if it was a bit slow to start.

Published by Thriftbooks.com User , 18 years ago
I bought this book because Romantic Times Bookclub magazine, the bible of the romance genre, rated it 4 and a half stars and a TOP PICK which means it is the best of the best. The review said, "The Spinster and the Wastrel is a delightful story without a contrivance in sight!" The rating was right on the money. The characters in this Regency are wonderfully original and I found myself lost in this compelling and passionate story. This was a real page-turner that I never wanted to end! Many traditional Regencies in recent years have over-used plot devices, and less than likeable characters. Bergin is a remarkable new author who is a gift to the genre.

Published by Thriftbooks.com User , 18 years ago
Annette, the daughter of the late vicar, is alone in the world except for the widowed pig farmer's wife who is her companion and dearest friend. Annette's one joy in life is helping others. She actively involves herself with assisting every charity case in the community...which often leads her to the local Baron's door. He is the only one with money to spare for those in need and it IS his responsibility to care for his tenants and those in the village...and Annette is not afraid to tell him so! The Baron is a terrible pinch-a-penny and about the grumpiest person you could ever meet, but he holds a grudging respect for Annette...or so she assumes when the elderly man dies and leaves her everything that is not entailed...a fortune!Sir Gerard is seriously displeased. His uncle never gave him a penny in his lifetime, forcing Gerard to live by his wits and his gambling skills alone. In fact, Gerard was counting on his inheritance to pay off some pressing gambling debts. But now his uncle has left all the money to a plain country spinster. Gerard only has the estate, which he very well may lose if he doesn't get some cold hard cash...and fast!And so he finds himself at the mercy of Annette. He bullies her, begs her, reasons with her, begs again, sweet talks her, befriends her, and even proposes marriage, but Annette is determined to keep the money and spend it helping others. She will not hand it over to some handsome Londoner who will only gamble it away...even if she has fallen head over heels in love with...that wastrel! But when Gerard appears to have fallen for her, and not the money, will Annette be able to trust him? Will Annette and Gerard choose love, money, or both? Read and find out!

Published by Thriftbooks.com User , 18 years ago
Gerard Montfort thought that he would inherit not only his miserly uncle's title and estate, but his entire unentailed wealth as well. But when his uncle passes away and Gerard arrives at the small village of Upper Brampton in Wiltshire to hear the will, he discovers that while he has inherited what is his due (the title and entailed estate), his uncle has bequeathed all the unentailed property and wealth to Miss Annette Courtney, the prior vicar's daughter and spinster of the parish. Gerard is fit to be tied. How could his uncle do such a thing to him? And what is he to do? For Gerard has borrowed heavily from a moneylender and now has no way of repaying the loan or of taking care of the people of his estate. Should he contest his uncle's will or try and smooth talk the spinster into seeing things his way?Annette has spent a lifetime trying to help the people of her village and trying to wrest much needed pennies out of the miserly Sir Nigel. And now the old man has left her a veritable fortune! Annette has every intention of using her new fortune to help the less unfortunate members of her village, as well as finally realising her dream of opening a school for the village children. Unfortunately Sir Gerard's claims that she has inherited money that is his due sits heavily on her conscience. And while she is initially able to dismiss his claims by telling herself that he is a gambler and a wastrel, she is unable to blithely carry on with this belief once she gets to know him better. Which is the real Sir Gerard? The care for naught opportunist that Sir Nigel claimed his nephew was, or the thoughtful and fair man she's gotten to know? Not everything is black and white. And as Annette begins to wrestle with the problem of deciding just what sort of person Sir Gerard is, she also arrives at the uncomfortable realization that the staid spinster of the village of Upper Brampton may have lost her heart and good sense to a practiced charmer..."The Spinster and the Wastrel" is a wonderful debut novel that can boast of possessing a story that is both interesting and a little out of the ordinary. Louise Bergin did a wonderful job of plotting the relationship that develops between Annette and Sir Gerard. She also does a wonderful job of portraying all the doubts and wariness that an unworldly and unsophisticated woman (Annette) would feel when trying to make up her mind about someone who is beyond her narrow scope of experience (Sir Gerard in other words), and of developing the character of Sir Gerard so that we get to fully appreciate all his frustrations and fears. The story flowed smoothly and briskly, and all the characters were fully developed and realized. Only two things kept this book from being a 5 star read and a keeper: firstly, that the romance factor was sadly lacking. I came away with the sneaking feeling that Sir Gerard wanted to marry Annette solely so that she would keep him on the straight and narrow. That he greatly admires her is never
Trustpilot
Copyright © 2022 Thriftbooks.com Terms of Use | Privacy Policy | Do Not Sell My Personal Information | Accessibility Statement
ThriftBooks® and the ThriftBooks® logo are registered trademarks of Thrift Books Global, LLC