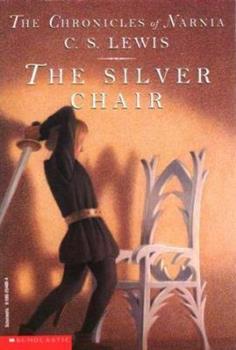 The Silver Chair (The Chronicles of Narnia Book 6)

(Book #4 in the The Chronicles of Narnia Publication Order Series)

A mass-market paperback edition of The Silver Chair , book six in the classic fantasy series, The Chronicles of Narnia , featuring cover art by Cliff Nielsen and black-and-white interior artwork by... This description may be from another edition of this product.

Published by Thriftbooks.com User , 4 years ago
I haven’t read it yet but the book is in perfect shape.

Published by Thriftbooks.com User , 18 years ago
This is an incredibly important book. For some reason, this was the one Narnia book I could never get all the way through as a boy even though I was an otherwise voracious reader. I'm not really sure why. I just finished reading it to one of my own sons and he seemed to enjoy it quite a bit. I wish now that I'd read it all the way through a long time ago. This is nothing less than a children's introduction to Christian spiritual warfare, in some ways far more general and comprehensive than Lewis' "Screwtape Letters" which covers the same subject for adults. In order of authorship and according to the original ordering of the series "The Silver Chair" is number 4, coming between "The Voyage of the Dawn Treader" and "The Horse and his Boy". Under the current numbering by the internal chronology of the narrative, it's second to last. In many ways neither ordering is really the most useful. In broad terms, the books divide thematically between allegorical (or better, fanciful) representations of salvation history, and guides to Christian living. Into the first category fall "The Magician's Nephew", "The Lion, the Witch, and the Wardrobe", "Prince Caspian", and "The Last Battle". The second category has "The Horse and his Boy", "The Voyage of the Dawn Treader", and "The Silver Chair". I believe this last is the most significant. Lewis himself always denied his works were intended to be strictly allegorical, and in the case of the salvation history volumes this may well be the case. Element by element assignment from reality to story usually breaks down once you get past Aslan as Christ, and even where characters or events are not made to do double duty at different points (such as Edmund in "Lion") it's not alway possible to carry out this operation reliably. ("Applicability", as Lewis' friend J.R.R. Tolkien termed it, is another matter.) But "The Silver Chair" is far more nearly allegorical than the others, with symbolism that's crystal clear. This makes the lessons it teaches, in the context of a high fantasy adventure, all the more accessible. It would take a long essay to explore all the lessons in this book so I'm not going to do that here, but they're not difficult to identify for an adult with a moderately thorough Christian education. Lewis packs an incredible number of subjects into this short book, everything from repentance and forgiveness to the basics of the theology of the image of God in our human nature. (Although in other works Lewis has promulgated what is, to Eastern Christian eyes, a faulty Augustinian Pneumatology, his treatment of the image here makes me think he must have been familiar with at least some Eastern Church Fathers.) Lewis also anticipates, and armors his readers against, modern trends already evident in his time such as the despair engendered by the prevailing nihilism, extreme materialism, secular humanism, and others. He was very much spot-on in indentifying those ideas that would come to presen

A classic story and a spiritual allegory

Published by Thriftbooks.com User , 18 years ago
If you have not read any of CS Lewis classic book series about Narnia, please do so. The stories are wonderfully written and will engage you like few other works. Part spiritual allegory and part fantasy and adventure, these stories are timeless.My personal favorite of the 7 stories is this one: The Silver Chair. Starting with the unexpected trip into Narnia, the story involves the search for a missing prince and a dangerous and exciting journey to find him. While the plot is quickly engaging and always enjoyable, even after dozens of readings, in this story Lewis uses some of the most powerful of Christian allegories to depict faith, deception, and courage. Choices made along the way are often disastrous and are the result of convenience and comfort over faith. Truly a sound statement into our own journeys, and a spiritual struggle depicted accurately.I will not spoil the plot, but if you have not enjoyed this series, pick up any of the seven books, or better yet get them all at once. The story starts either with "The Lion, The Witch, and the Wardrobe" which was the first published, or "The Magician's Nephew" which is chronologically the first. Either way, you won't be disappointed. Next to "The Silver Chair", I also found "The Horse and His Boy" and "Voyage of the Dawn Treader" to be absolute classics.Buy this series, and enjoy one of the true treasures in literature from a fabulous writer, the world renowned CS Lewis.

Published by Thriftbooks.com User , 21 years ago
Another great BBC production of the Narnia Chronicles. The only thing I could wish for is that the Emerald Witch didn't sound so terribly old. I feel she should sound more youthful and enchanting, but she sounds rather grandmotherish. Prince Rilian sounds quite a bit older than one usually imagines him, but the actor who plays him is fantastic. Eustace and Jill add a lot to the production with their chemistry, and Puddleglum steals the show. I should also mention that Brian Sibbley adapts this version lengthily to include more interaction between Prince Rilian and other characters before his enchantment, which is very intriguing.

Published by Thriftbooks.com User , 22 years ago
This was one of the most exciting books I've ever read. It was full of suspenstion because you never knew what was going to happen next.The author was very discriptive and made the book clear. I reccomenade this book for people that are the age of 9-14 that like adventurous books.

One of my favorite books in the Narnia series!!!

Published by Thriftbooks.com User , 23 years ago
One of the great things about the Narnia series is how each individual book stands alone! I mean, while it may be necessary to read them in order to better understand what's going on, each book has a certain charm unique in itself. And while I may like ALL of the volumes, I believe the BEST books are those in the middle, particularly "The Horse and his Boy", "The Magician's Nephew", and "THE SILVER CHAIR". These are the books in which C.S. Lewis really shines!In this particular volume involving cousin Eustace and his classmate Jill Pole, Lewis hits hard at the British school system (I dread to think how he'd view America's public school system today!) The bullying that Eustace & Jill face is what launches their adventure into Narnia, and what an exciting adventure it turns out to be! Puddleglum is an excellently crafted character who accompanies them on their journey into the wild north, where they encounter a beautiful witch and a dangerous race of intelligent giants. It's a well-done piece of storytelling, worth reading a second time!

The Silver Chair Mentions in Our Blog