Family Book Club: The Chronicles of Narnia — The Magician's Nephew

Ask a person what they spent the weekend doing, and they are likely to tell you about the new show they binged or a movie they saw. Unfortunately, fewer people are opting for books as their pastime of choice. According to the National Endowment for the Arts, less than 50% of American adults read literature. This decline might be seen as the natural effect of changes in Americans' home lives. However, regardless of the cause, the effect is apparent—Americans are losing touch with one of the most beneficial hobbies a person can have. Science proves that reading is responsible for reduced Alzheimer's risk, improved ability to relax, and increased empathy for others.

So why not gather your family and loved ones, and start a new tradition together—A Family Book Club!

If you're ready to dive into reading, why not make it a family activity? Reading with kids sets an example and establishes the value of books at a young age. A book club is also an opportunity for families to bond, spend time together, and share ideas. So how do you start a family book club? You can start by following these steps:

Book clubs allow families to discover a new passion for reading or reignite a current interest in books. Together, you can explore a world of ideas from a litany of different authors across countless genres. Reading helps kids learn, so a book club can positively affect academic performance, too, making it a win-win for every member of the family—kids and adults alike.

What is better than bringing your family together to engage in a book that everyone in the family can enjoy?

The Chronicles of Narnia—The Magician's Nephew

One of the most enduring classic literature series for kids is The Chronicles of Narnia. Since its initial publication in 1950, the series has spawned TV and movie adaptations, and more importantly, it's served as a gateway to the magic of reading for multiple generations. The series contains seven books in the following order:

The first of the series, The Magician's Nephew, introduces the extradimensional world of Narnia. The story takes place in London, in the late 19th century, where readers meet neighbors Digory Kirke and Polly Plummer. The children's uncle, Andrew Ketterley, is an evil magician who crafts two rings—one that can banish its wearer with a single touch and another that can retrieve a person from their banishment. Neither of the rings has the effect he expected, though. When Polly and Digory touch them, they are transported to a new land, a land that will be known as Narnia. And in Narnia, everything is possible.

The Chronicles of Narnia—The Magician's Nephew thus sets the stage for the rest of the Narnia series. It is one of the perfect family-friendly selections as far as book club books go. It's recommended for kids ages eight and up, but readers of all ages have enjoyed the novel for decades. It is a rare find that'll be just as enticing to parents as it will be for kids. Families can delve into the thoughtful themes found in the book, including moral dilemmas, the responsibility of power, and the purpose of the law.

There are many angles to take when discussing The Chronicles of Narnia—The Magician's Nephew. The book is thematically rich and offers an array of material for discussions. You can start the conversations with general questions like "Did you like the book?" and "What did you learn from it?" Some suggested discussion questions include: 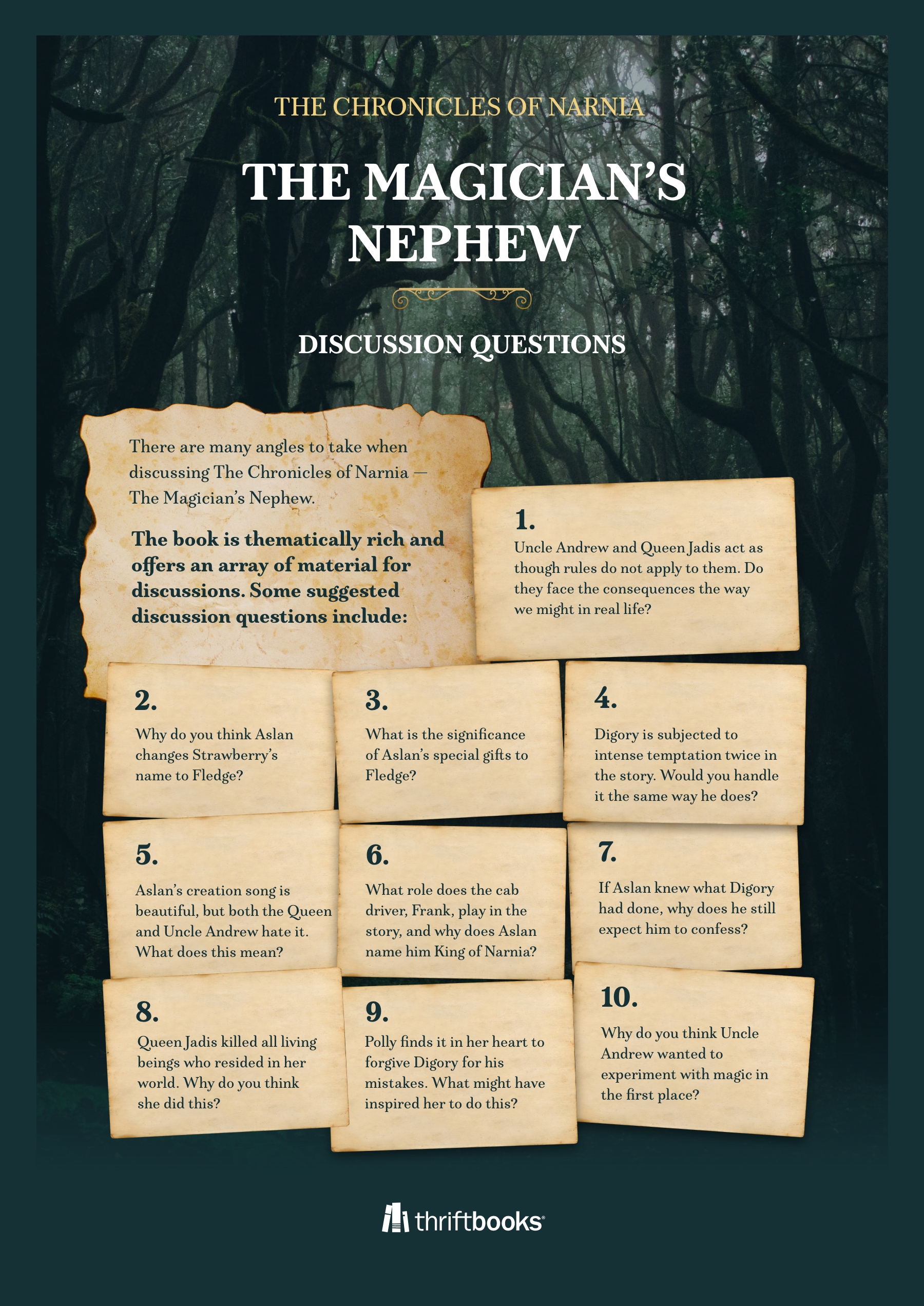 What do you say? Are you ready for a new adventure with your family? These discussion questions can be downloaded and printed out here.