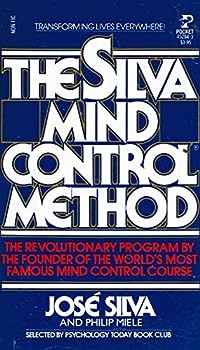 The Silva Mind Control Method: The Revolutionary Program by the Founder of the World's Most Famous Mind Control Course

by José Silva and Philip Miele

The revolutionary program that teaches you how to use meditation and visualization to change your life. First published in 1978, The Silva Mind Control Method has helped millions of people create... This description may be from another edition of this product.

Published by Thriftbooks.com User , 16 years ago
Jose Silva's book about the Silva Method is good. However the 4-day workshop is excellent. Taking the course in 1981 forever changed my life. Before my introduction to the Silva Method I was skeptical if I could not see, feel, taste or touch something. I saw only the physical world and thought the way to understand and harness it was through science and technology. The experiences of a fellow therapist and a psychologist I worked with, who I respected, closed my tiny materialistic window and opened a vast door to the invisible world of energy and spirit. They said they had each learned to diagnose and heal three people knowing only their names, age and location. Steeped in the medical model for healing I suspected my friends had been duped and thought about taking the course to expose the charlatans. Especially since the Silva training had a money back guarantee. When I heard a 4-day Silva course was being offered locally, I signed up. The introductory lecture was about Jose Silva, the founder, and outlined the almost four decades of research and development of The Silva Mind Control Method. The instructor said the five senses-touch, taste, smell, hearing and sight are only a part of the senses we are born with. He said the exercises would help us learn to use more of our minds and use it in a special way to prevent illness, improve our health, solve everyday problems, learn more easily, strengthen our imagination, deepen our spiritual awareness and tap into Higher Intelligence. He said that meditation takes place when we are in the Alpha Brain State and that an electroencephalograph (EEG) can measure it. The brain rhythms of the Alpha Brain State are about seven to fourteen cycles per second (CPS) and we are in this energy state when we first go to sleep and when we dream. Meditation is going into Alpha Brain State without losing awareness. To become more relaxed and meditative we were told to "Project ourselves mentally to our ideal place of relaxation." I become more peaceful as I pictured my favorite bubbly mountain steam in North Georgia. We did two countdowns to control the depth of our meditation/relaxation and one to return to consciousness. While in our meditative states we practiced positive affirmations and the power of visualization. For example we visualized an apple on a large movie screen about six feet in front of us. We studied the details of the apple-the color, smell, touch, and taste. At first I had difficulty as my mind wandered but the instructor reassured us that our concentration would improve as we trained our minds to focus. We were also instructed to practice projecting ourselves in and around different forms from the inanimate, plant, animal and human kingdoms. We would look at the texture, form, light, odor, color, temperature, solidity and abnormalities. Each day I found myself going to deeper levels of relaxation while fully conscious. My visualizations became so real on the third day I had a moment

It's a book that can be read on many levels ...

Published by Thriftbooks.com User , 20 years ago
The first time I read this book was when it first came out in 1977. I've re-read it several times since then. My copy is marked up and dog-eared, yellowed and brittle, and falling apart. Yet, it's still an interesting read every time I pick it up. The first part is a quick biography explaining how Jose Silva came to his discovery and development of the Silva Method. The rest of it is a how-to manual. It lays the groundwork for his later books which concentrate on applying these principles to your life.The Silva Method is based on a simple philosophy that you become what you think you are. If you have a negative self-image, then you become that person in the real world. If you want to change who you are in the real world, you need to change who you are in your mind. And he tells you how to do it.On one level, it's a beginner's course in positive thinking, giving you step-by-step instructions on active meditation and creative visualization. Silva tells you how to go to your "alpha level" (a semi-conscious dream state), create a positive self-image, and turn it into reality. Even if you never get past this beginning stage, if all you can do is repeat Emile Coue's daily affirmations, "Every day in every way, I'm getting better and better" and "Negative thoughts have no influence over me", you'll still be so much better for it. It's really like positive self-programming.But, on another level, it's also an advanced course teaching you how to expand your mind to increase your intelligence, improve your memory, develop ESP, heal your injuries and disease, and even heal others. Getting there is a little more difficult for most of us because it involves a leap of logic and faith. We have to overcome our belief systems.You may have some difficulty with this book if you tend to be very literal in a scientific sense. We all know the mind is capable of many things, but there's no hard scientific evidence for some of Silva's more extraordinary claims. There's only anecdotal evidence, mostly of the kind that cannot be measured or quantified. Believing that your mind can influence yourself may be easy to accept, but believing that your mind can influence others requires a leap in logic. You may also have some difficulty with this book if you tend to be very literal in a strict Christian sense. The Silva philosophy is that you can control, or at least greatly influence, your own destiny. And you need a strong faith ... in yourself. Then you can do anything ... even things we might think of as "miracles". That might be hard to reconcile with your belief that only God can perform miracles. He also speaks of God in a more universal sense, a "Higher Intelligence". It sounds more like the "Force" in Star Wars than the Biblical God. Anyway, Silva's books can mean many different things to many different people. The scientific community has debunked it. The religious community has denounced it. And it sounds a little too New Age-ish. But, in the final analysis, it's reall

Published by Thriftbooks.com User , 21 years ago
Great book that helps you take control of your life. Silva developed the Silva Method many years ago. It is what he calls 'active meditation'. People use this to solve problems, get results they desire, create opportunities ( it really works! be more open minded!), cure illness etc.Personally, i used this method once to cure a bad throat and loss of voice 2 years ago. I have had this weak voice and throat for weeks that wouldnt heal. Then one night i decided to 'go to my level', i did some visualisation and suggestion to myself, the next morning awoke with a great soothing feeling and clear sharp voice back!If you have read Emile COue's books on Autosuggestion, or Dr Joseph Murphy's "How To Use Your Subconscious Mind" etc, then u will understand how it works. Silva takes it a step further by a scientific approach- inderstanding brainwaves or brain levels. Alpha- Beta - Theta etc,,, these are the brainwaves or cycles our brain function in. Silva method teaches you to get to Alpha - the most 'intelligent/spiritual' level of all, because it is directly connected to the subconscious at this level.Lots of smart techniques that work. To many, his method is much like NLP, although NLP was not yet invented by Bandler(not until mid 70s) yet when Silva developed it. But still there are some similarities between them.

Know yourself. Grasp your potential!

Published by Thriftbooks.com User , 23 years ago
Before proceeding any further let me tell you won't waste your time from reading such a book like this. There's sufficient scientifical evidence from the practical findings done by Jose Silva and there's enough literature on the field of brain activity and visualization which NOW strongly support his remarkable techniques. Any Psychologist is witness to that. I first learned about Jose Silva Mind Control Method by reading this practical and amazing book. After trying some of the techniques outlined on it and seeing and enjoying the amazing results I decided to attend a seminar in MEXICO CITY in 1987. I graduated from the Basic Course and to my surprise EVERYTHING improved in my life since then EVERY DAY, IN EVERY WAY!!. My grades as a student, my personal finances, my relationships with others, my job, my health. I don't mean that there was anything wrong or I was in any special need for something. I think what I received was the knowledge to use all the special faculties I was endowed with as a Human being. I do sincerely recommend this book and I wish you to practice the dynamic meditation Jose Silva presents. Personaly I practice every day the simple meditation which I believe is in no conflict with any religion or philosophical point of view, quite the contrary I belive is a natural state of being. One last word, you need not to be an oustanding visualizer to make Silva Method work, it only takes to be a HUMAN BEING with the desire to be better and the courage and discipline to do it. Believe in yourself!
Trustpilot
Copyright © 2022 Thriftbooks.com Terms of Use | Privacy Policy | Do Not Sell My Personal Information | Accessibility Statement
ThriftBooks® and the ThriftBooks® logo are registered trademarks of Thrift Books Global, LLC