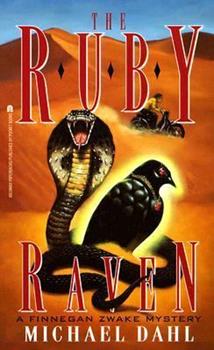 (Book #3 in the Finnegan Zwake Series)

In this finale of a three-part mystery series featuring 13-year-old Finnegan Zwake, Finnegan and his uncle travel to the Sahara for an international mystery writing competition. Some of the contestants want the prized Ruby Raven so much they are willing to do anything to possess it.

IT'S A COOL BOOK (maybe or probably)

Published by Thriftbooks.com User , 17 years ago
The book The Ruby Raven by Michael Dahl is a Suspensful and fun to read.This book starts out with a boy named Finn and his uncle Stoppard.They were entered in a contest for the ruby raven and a million dollars.They had to write a mystery book to enter.They traveled everywhere like Paris and Africa.Someone tries to kill uncle Stoppard in the story.When I started it was a little boring.As I went through it got a lot better.I learned stuff about places.There were sooo much mystery and red herrings.If you like mystery you'll love this book!!!!!!!!!!!!!

Published by Thriftbooks.com User , 20 years ago
This book is the best in the Finnegan Zwake series. The plot is awesome and the way the killer does the job is really unbelievable. There are twists and turns in the plot that make it very intruiging and keep you guessing tell the last chapter. It is hard to guess who the killer is because the clues are kind of sketchy and hard to figure out. When I finished reading it, though, I was like "oh duh!" This is the best mystery novel I have ever read.

Published by Thriftbooks.com User , 20 years ago
The Ruby Raven is far the best book I have ever read. Finn is a great character and Uncle Stop. I love how it uses humor, and how Finn thinks in his mind like normal people. I love how you get clear ans crisp pictures in your mind when your reading. I think this book should be made into a major motion picture!!! Every one should read this book.

Published by Thriftbooks.com User , 20 years ago
"Truman Ravenwood named his house Dead End. In Arabic it was called Tariq Masdood (it rhymes with "the geek was nude")."That is one of the many hilarious parts in this book. It was without a doubt the best in the series. Finnagen Zwake and his Uncle Stoppard, a mystery writer, are off to Occo, which is in between Lesser Occo and Morocco. From the moment an explosion occurs a short distance from their house to the last page of the book, it is nothing but mystery and murder. The reason they are going to Occo in the first place is because Finn dropped a book and his uncle's foot at the library (which Finn would regret many times throughout the book), which resulted in his uncle's latest novel: Into My Grave. Into My Grave is a critical success, and he is one of the ten nominees eligible to win the Ruby Raven, a priceless carved raven with rubies for eyes and a ruby penant around its neck, along with one million dollars. However, those nominees are dropping like flies. First with Nabi Neez is crushed beneath a fallen pillar, then a bus driver is beheaded at an ancient guillotine, Uncle Stoppard disappears, and Omar Bah is found in a crumpled heap in a bone pit. No one knows the causes of these mysterious disappearances and deaths...until the last two chapters. A must-read for all fans of the first two Finnegan Zwake books. You'd like these if you read Harry Potter or A Series of Unfortunate Events, too. It's a good thing they're making a fourth book, The Viking Claw!

Published by Thriftbooks.com User , 22 years ago
This book is a great book,and I like it alot.It's just as exciting as the First two,and it really keeps you guessing.I had no idea what was gonna happen untill te last chapter,and parts of it were pretty funny.All mystery fans would enjoy this book.~Thank you,Michael Dahl! ~
Copyright © 2022 Thriftbooks.com Terms of Use | Privacy Policy | Do Not Sell My Personal Information | Accessibility Statement
ThriftBooks® and the ThriftBooks® logo are registered trademarks of Thrift Books Global, LLC