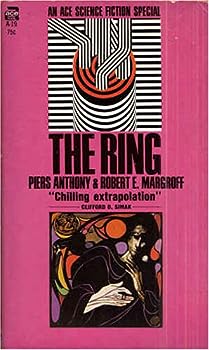 After a youth spent trapped in space exile, Jeff Font returned to Earth to seek vengeance against the planetary mogul who had framed and destroyed Jeff's family. Jeff's plans backfired: he was... This description may be from another edition of this product.

Read it a long time ago, but I thought it was good

Published by Thriftbooks.com User , 16 years ago
I've read around 10-15 books by Piers Anthony, and no offense, but I didn't care for the silly fantasy style of the Xanth series, but this one was a pretty good read. I felt like the protagonist had to succeed, and the risk he faced kept the suspense going.

One of the Best Sci-Fi's I've read in a long time!

Published by Thriftbooks.com User , 21 years ago
Jeff Font returns to Earth to seek vengence against the planetary mogul who had framed and destroyed Jeff's family. But Jeff's plans backfired; he was captured, drugged, rammed through the computerized court system, convicted and ringed.The "Ring" is a surgically implanted electronic monitor that automatically caused unendurable agony when a convict strayed. A ringer can do no evil, think no evil, see or hear evil without ratting to the robocops, nor can he defend himself or others from insult or injury. In a corrupt world of licensed sin and satanic parties ringers are the ultimate victims. But the ring's data banks hadn't factored in Jeff's strength, courage, and his will to fight society, the world and the agony of the ring to unravel the plot that entrapped him and to see justice done. Hard to put down. A Sci-Fi must read! Highly recommended.

Great book. I have two, 'cause I lost it bought it found it

Published by Thriftbooks.com User , 24 years ago
In my opinion, This is the best work Piers Anthony ever did. He has a unique idea for keeping a handle on crime. The Ring does not allow its wearer do anything the wearer knows is wrong. It delivers an electrical shock which intensity is dependent on the severity of the crime. He delves into the way that people who are ringed are treated as well as their reactions. It is a great read.
Trustpilot
Copyright © 2022 Thriftbooks.com Terms of Use | Privacy Policy | Do Not Sell or Share My Personal Information | Accessibility Statement
ThriftBooks® and the ThriftBooks® logo are registered trademarks of Thrift Books Global, LLC