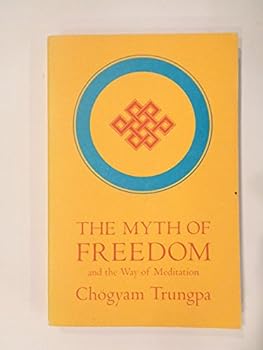 The Myth Of Freedom

Ch? gyam Trungpa's unique ability to express the essence of Buddhist teachings in the language and imagery of modern American culture makes his books among the most accessible works of Buddhist philosophy. Here Trungpa explores the true meaning of freedom, showing us how our preconceptions, attitudes, and even our spiritual practices can become chains that bind us to repetitive patterns of frustration and despair. This edition features a new foreword...

Published by Thriftbooks.com User , 17 years ago
After reading his excellent book "Cutting Through Spiritual Materialism", I was happy to find another one by this author. While the first took a razor sharp sword of insight to the idols of delusion which surround us and appeal to our egos. This book takes a finer blade to the ways we fool ourselves into a life of dissatisfaction. Trungpa uses clear language to explain the path to enlightenment, and the ways in which we sabotage ourselves. He lets us know that a clear view of reality is far more wonderful than our most wild and tempting fantasies of paradise. If you are serious about meditation or spiritual development, this book is invaluable. Read it more than once, you will find new treasures in it as your perspective changes along the path. Sweyn Author of The Rune Primer: A Down to Earth Guide to the Runes

Published by Thriftbooks.com User , 19 years ago
Chogyam Trungpa (1939-1987) brought Tibetan Buddhism to our country as the founder of the Boulder Shambhala Center and Naropa University. In the Foreward to this new edition of his book, Trungpa Rinpoche's student, Pema Chodron (WHEN THINGS FALL APART, THE PLACES THAT SCARE YOU) writes: "When I took to heart the teachings presented here, a curious change slowly began to take place. I became far more open to the pain of myself and others; far more open to laughing and crying; far more able to love and accept and see my interconnectedness with all beings. As the years go by, I gradually become more and more at home in the world with its inevitable ups and downs."In his 179-page book, Trungpa teaches us how to know ourselves through meditation. "Meditation in the beginning is not an attempt to achieve happiness," he tells us, "nor is it an attempt to achieve mental calm or peace, though they could be by-products of meditation. Meditation should not be regarded as a vacation from irritation" (p. 46). While we may believe we are free to pursue our dreams, achieve our goals, and satisy our desires, Trungpa shows us how we are instead enslaved to our habitual patterns and negative emotions such as self-absorption (pp. 23-28), paranoia (pp. 28-29), passion (pp. 29-32), stupidity (pp. 32-35), povery (pp. 35-37) and anger (pp. 37-40). "We must be willing to be completely ordinary people," he observes, "which means accepting ourselves as we are without trying to become greater, purer, more spiritual, more insightful. If we can accept our imperfections as they are, quite ordinarily, then we can use them as part of the path. But if we try to get rid of our imperfections, then they will be enemies, obstacles on the road to our 'self-improvement'" (p. 44). And in this highly-recommended book, Trungpa teaches us how to cut through the barriers separating us from the rest of the world.G. Merritt

Published by Thriftbooks.com User , 21 years ago
This is the sequel to "Cutting Through Spiritual Materialism". Are you gay? Are you a crossdresser? Do you cheat on your taxes? Did you hit one of your children? The point of Trungpa's teaching seems to hammer agin and again at the main human condition. That we are afraid of being human. We are "embarassed" at being human. One woman was reported as having choked to death in a restuarant. Why? Because she was too embarrassed to cough! Through his behavior and his teachings, Trungpa kept hammering this message home at his students. "The Myth of Freedom" takes us from the beginning of the Hinayana Journey (in the Tibetan sense, not to put down Theravada Buddhism which is also called 'Hinayana') all the way to the Vajrayana teachings where there is direct transmission from the Spiritual Guide. Trungpa goes through the technicalities, but you must remember that these are lectures to his students. I shared the same block as Trungpa. He was giving a lecture in LA in December 1980. I was too embarrassed to go inside. I might stammer when I met him. I might "goof up" (as he called it). Maybe I would say something "stupid". I was embarrased. I was embarrassed until his teachings sank in. Then I began to loosen up. Unfortanately, I went back to my "cocoon", as he called it. I've read this book three times. You will love it! Just don't balk when you read other books on Tibetan Buddhism where there are very many rules. The message of Trungpa was "Stop being embarrased about yourself!". And he showed this example by indulging in the worst behavior imaginable. But, yes, you can sneeze in front of a group of people. You can leave your zipper down accidentally if you are a male. Or don't put on a bra if you are a female and then find that you clearly "see" through while you give a lecture! According to Trungpa, it this embarrassment which he referred to as "negative negativity". He pounces on this concept throughout this book and his others. Negativity is alright in itself. I get angry. But then I am embarrassed for BEING angry. So I gulp it down or explode. If we accept the basic negativity, feel it, then this is negativity. But if we shame ourselves for having it - then this manufactures even more anger or Negative Negativity. Which can eventually result in being a mass murderer. Everything is being projected outside on the world. You are not "eating your past" so to speak. This is the message of the book. BUY IY! And buy "Spiritual Materialism". Thannk you (mispelling intentional).

What Buddhist practice is really all about

Published by Thriftbooks.com User , 21 years ago
Incisive teachings by one of the most influential Tibetan Buddhist teachers in the West. A central theme: giving up our hopes that meditation will bring us bliss or tranquility or make us better or wiser people or otherwise serve our ego's purposes, and realizing the liberation that is right here within our pain and confusion and neurosis. Trungpa's "Cutting Through Spiritual Materialism" seems to be more widely known and more often recommended, but I like "The Myth of Freedom" even better, and I think it's a more suitable book for folks who are new to meditation. Also recommended: "The Wisdom of No Escape" by Trungpa's student Pema Chodron.

The Myth of Freedom

Published by Thriftbooks.com User , 23 years ago
I disagree with the other person reviewing this book, this is a very traditional book, a no-nonsense approach to buddhist practice and against a "sugar and spice" spiritual materialism (fake spirituality). I've been practicing for 20 years and have been reading this book at different times all along; I still take enormous refreshment in this book. If you really want a direct look at genuine, basic buddhist practice read it. It is almost painfully honest.
Copyright © 2020 Thriftbooks.com Terms of Use | Privacy Policy | Do Not Sell My Personal Information | Accessibility Statement
ThriftBooks® and the ThriftBooks® logo are registered trademarks of Thrift Books Global, LLC