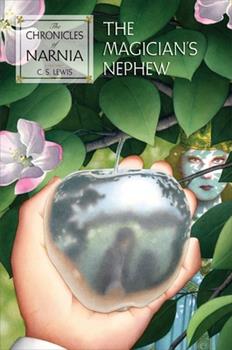 Narnia . . . a land frozen in eternal winter . . . a country waiting to be set freeWitness the creation of a magical land in The Magician's Nephew, the first title in C. S. Lewis's classic fantasy series, which has captivated readers of all ages for over sixty years. This paperback features cover art by three-time Caldecott Medal-winning illustrator David Wiesner and black-and-white interior art by the series' original illustrator, Pauline Baynes.On...

Published by DeeJoy , 2 years ago
I am currently reading the C.S. Lewis series to my kids, but read that this is actually book #1, so I started here. They love it!

Published by Gabi , 2 years ago
My family and I listened to the audiobook on a trip, and it just brought me back to reading this as a child. I love escaping into C.S Lewis’ world.

Great book. It's the first in the collection.

Published by Felix , 3 years ago
It is the first one in the series, it even explains the making of the wardrobe before the second book which is the lion the witch and the wardrobe. The first two are the best in the series.

Published by Thriftbooks.com User , 13 years ago
This is an excellent book. I like the large print; this is no paperback.

How It All Began

Published by Thriftbooks.com User , 19 years ago
Digory and Polly are exploring a passageway between their houses one summer morning when they stumble into Digory's uncle's study. Uncle Andrew dapples in magic, and tricks Polly into taking one of his magic rings. Digory goes after her, and they find themselves in a magic wood, a passageway to different worlds. Exploring further, they find evil as well as a land about to be created.This is a different story in the Narnia tales. First, we don't arrive at Narnia until after half way through the book. Second, this is the only book where actions in the fantasy worlds have direct impact on events in our world. For these reasons, it's a fun change in the series. The story in Narnia is simpler then the others, but it makes watching a new world take shape no less thrilling. And there are some important lessons on doing the right thing at the right time and getting out of life exactly what you expect.There is quite a debate about the order this book should be read in. While it was published sixth, the events place it first. When I read these books back in third grade, I read them in publication order, and I enjoyed that because there are some surprises in here that explain a couple scenes in the first book. Admittedly biased, I think that reading them in publication order would make for the most enjoyment. However, the issues involved are very minor and any of the books can really be read in any order without spoiling anything important.No matter what order you choose to read the books in, make sure you do. These are classic children's fantasy for a reason; they are fun stories that can be enjoyed by kids of all ages.

Book 1 ? A guide to the unending secrets of Narnia

Published by Thriftbooks.com User , 20 years ago
"The Magician's Nephew" was the second last of seven books that C.S. Lewis wrote in the Narnia Chronicles, but chronologically it relates events that occur first in the series: the creation of Narnia. Two children, Digory and Polly, enter a strange world through the help of magic obtained by Digory's Uncle Andrew. In this world they discover the evil witch Jadice. But then Digory makes his first mistake: he brings Jadice back to life, and worse, brings her evil presence from a world that is dying (Charn) to a world that is just beginning (Narnia). But Digory is not without redemptive qualities - he journeys with the winged horse Fledge to a magical garden reminiscent of Paradise, and resists further temptations from Jadice by faithfully taking an apple from a tree in the middle of the garden and planting it in Narnia. This fruits of this tree eventually prove to be a blessing to Digory and Polly as they return to the real world. In fact, it is this tree that later will be built into the magic wardrobe of book 2.As with all the Narnia Chronicles, on the level of children the story functions as a perfectly comprehensible and exciting fantasy adventure, but on an adult level it imparts powerful spiritual truths about Christianity by means of numerous recognizable Biblical allusions. "The Magician's Nephew" very obviously reflects on the motifs of creation and fall, as evil enters a beautiful world where a man and his wife are king and queen (p.142). The notions of creation, the Paradise garden of Eden, Adam and Eve, the forbidden fruit, and the tempter Satan, are all present. Especially telling is Aslan's indictment of Digory for bringing evil into the newly created world: "You see, friends, that before the new, clean world I gave you is seven hours old, a force of evil has already entered it; waked and brought hither by this son of Adam." But there is immediately a hint of redemption and the suggestion that it will be accomplished by Aslan himself. "But do not be cast down. Evil will come of that evil, but it is still a long way off, and I will see to it that the worst falls upon myself ... Adam's race has done the harm, Adam's race shall help to heal it." (p.161-2). Digory's successful resisting of the temptation of Jadice in obtaining the magical silver apple is a subtle reversal of the account of the fall, and possible only because of Aslan.As always, in all the upheavals and conflicts of Narnia, Aslan is the one constant, and it is his vital involvement that enables the children to complete their Narnian quest, just as it is Christ who inspires, comforts, guides, and saves in the real world. Narnia may exist only in Lewis imagination and ours, but these underlying truths about Christ ensure that a journey to Narnia is never without profit for the real world.

Published by Thriftbooks.com User , 22 years ago
I am not going to dispute that this is a great book because it is, but it is NOT Book One of the Chronicles of Narnia. Reading this First SPOILS the mystery of the Wardrobe in "The Lion, the Witch, and the Wardrobe". If you want to read the books in the correct order it is as follows:1.The Lion, the Witch, and the Wardrobe2.Prince Caspian3.The Voyage of the Dawn Dreader 4.The Silver Chair5.The Horse and His Boy6.The Magician's Nephew7.The Last BattleDO Read this book, just please read it at the right time.

The Beginning of the Adventure

Published by Thriftbooks.com User , 22 years ago
The Magician's Nephew by C.S. Lewis is a wonderful beginning to The Chronicles of Narnia. Two children, Digory and Polly, are given a great gift by Digory's uncle. He gives them rings which give them the power to travel to different worlds and travel home again. They travel to many different worlds and have many different adventures. I one of the worlds they find an evil queenwho follows them back home. Polly and Digory take the the queen to a different world where they meet a kion called Aslan and many different talking animals. Digory takes a silver apple back home to his dying mother. When Digory gives the apple to his mother and she is miraculously cured. Digory plants the apple core and magic rings in his backyard. You will have to read the rest of this magical adventure to find out where the magic appears next. This book is one of the most wonderful and magical books I have ever read. Lewis's imagination really keeps the books alive. It makes you feel you are sharing the adventures right along with the characters. I would recommend this book to anybody because it is so fascinating. This adventure-fantasy is for people of all ages. It makes you want to keep on reading to find out what happens to the characters. There is a lot of suspense and it is very absorbing. I love the way it leads into the next book of The Chronicles. It makes you want to read all the other books that follow.

The Magician’s Nephew Mentions in Our Blog