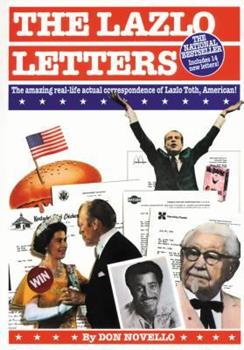 In letters to stars, dignitaries, and chairmen of the country's most powerful organizations, Don Novello's alter ego Lazlo Toth pestered his victims for photographs, offered outlandish advice, fired off strange inquiries, and more. The strangest part? Practically everyone answered, leaving Toth with a hilarious collection of outlandish correspondence unmatched in the history of American letters. The Lazlo Letters contains nearly 100 notes to public...

It was the first of it's kind and still the funniest.

Published by Thriftbooks.com User , 19 years ago
This was one of the first prank letter books ever published. Several books have tried to follow the originality of Lazlo Letters but pretty much fail, with two exceptions: Letters From a Nut - by Ted Nancy (possibly Jerry Seinfeld) and Hire Me Dumbass by Joe Mozian. Own all three and you have the best of this hilariously underrated genre. But Lazlo Letters especially is a must have.

For the sarcastic and ironic humorist in all of us

Published by Thriftbooks.com User , 20 years ago
Don Novello (formerly known as Father Guido Sarducci from the "Saturday Night Live" of the 1970s and 1980s) has compiled a comic gem with this collection of his letters to corporations, mayors, presidents--even Saudi princes.Lazlo Toth, Novello's hilariously opaque and irony-free alter ego charges forth into the world under the motto, "You send out letters, you get back letters, that's for sure!" He sends out letters on essentially NOTHING to everyone he can think of, and he gets back letters which are sometimes side-splitting in their serious response to his blather. The Mister Bubble correspondence is a classic in which Toth complains to the Mister Bubble company that he doesn't understand how he is supposed to make use of their product when the box clearly states, "KEEP DRY." The ensuing letters back and forth are golden comedy.

Published by Thriftbooks.com User , 21 years ago
During the classic years of Saturday Night Live, I would always check the opening credits to see if Don Novello or Andy Kaufman would be on that night, my two favorite comedians, both writers of completely original, completely crazy bits.The Lazlo Letters (TLL) shows Novello as a writer who, like Kaufman, totally commits to his comic premise. In this case, the premise took twenty years of letter writing to make happen. This book is truly great American satire, busting the pretensions of corporations and celebrity icons in a truly original way. The fact that Novello's original concept is hilarious is proven by the reams of pissant imitators who ripped him off Well, Novello has written a funny sequel CITIZEN LAZLO, which I'd also recommend. The hell with 'em, Lazlo! Fight! fight! fight!

A milestone of written comedy

Published by Thriftbooks.com User , 22 years ago
The very idea of writing crank letters and publishing the responses is funny enough, but Novello's wit takes it to a nearly unimaginable level of humor.It's true, as another reviewer suggests, that some of the humor will fly over the head of those unknowing of 1970's politics and popular culture. But that's only part of the book. Most of it is comprehendable to anyone who reads carefully and thinks about the subtext of ridiculousness with which the author toys.Perhaps most impressive are the series of letters, in which Lazlo's fictional voice gets more and more exasperated at the replies fail to comprehend his point. The identify of who is playing the fool becomes blurrier and blurrier as corporate drones try to answer his often ridiculous queries.Truly a milestone of American comedy.

Published by Thriftbooks.com User , 22 years ago
Such an amazing & hilarious compilation of letters and responses! My sister-in-law had these books for years, and I always pulled them out to re-read every time I visited. She finally gave them to me for a recent birthday. You can re-read this book (and its companion volume "Citizen Lazlo") over and over and they never lose their edge.To truly appreciate this book, it needs to be placed into perspective. It was originally published in 1977, and the letters span late 1973 through November 1976. The main (although not sole) thread is Watergate and its various actors. You need to remember the mood of the country at the time, and then understand the methods of Don Novello - liberal comic - posing as Lazlo Toth - uber-patriotic & unreconstructed Nixon man. In this book (unlike some of the second), the respondents - not in the joke - reply (mostly) with heartfelt thanks to whom they assume is a true believer. One can only imagine their reactions when they see their earnest repsonses in print and placed in this hilarious context.
Trustpilot
Copyright © 2022 Thriftbooks.com Terms of Use | Privacy Policy | Do Not Sell or Share My Personal Information | Accessibility Statement
ThriftBooks® and the ThriftBooks® logo are registered trademarks of Thrift Books Global, LLC