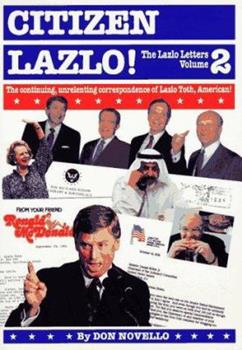 by Don Novello and Lazlo Toth

Following the success of his New York Times bestseller The Lazlo Letters, Novello slips back into his all-American alter ego, Lazlo Toth, to provide a new round of correspondence with politicians, celebrities, and royalty.

Published by Thriftbooks.com User , 20 years ago
Now that we have imitation Lazlo Toth's - even the Jerkey Boys are derivative, aren't they! - let's not forget that the same guy who puts on the big hat and sunglasses can be someone else when he wants to be.I just wish he would have lunch with me at Sushi-To-Die-For?Are you game?

LIke most sequels, it's not a potent as the original

Published by Thriftbooks.com User , 22 years ago
As interesting as it is to see Novello expand upon his letter writing, there's something disappointing about this second volume. Perhaps it's the introductio of Lazlo into a world in which he's already known. The responses from correspondents who already "get the joke" make one feel as though they're peeking behind the Wizard's curtain.Still, given the pungence of the concept and the quality of Novello's writing, this couldn't help but be another good read. It just couldn't possibly live up to the original volume.

As funny (for different reasons) as 'The Lazlo Letters'

Published by Thriftbooks.com User , 22 years ago
The original book ('The Lazlo Letters') was set in the mid-70s and was essentially a tremedously funny, well-executed goof on Watergate and its participants. 'Citizen Lazlo' is wider in its timeframe (1977 - 1992) and focus (all over the map). For flat out hilarity, nothing can beat (as mentioned by an earlier reviewer) the "Fit For a President Microwave TV Dinner" idea that 'Toth' pitches to the Campbell Soup Company. [Sample: Nixon-Mao Frozen Chinese Banquet...eat the meal that ended 23 years of hostility.]My favorite has got to be his pitch to Kinney Shoes for a new advertising campaign based on "The Wind Beneath My Wings," entitled "The Feet Within My Shoes":Did I ever tell you you're my hero?Tho' you're the farthest parts of meI can run faster than a beagleYou are the feet beneath my kneesThe cadence of these letters continues the unique, hilarious style perfected by Novello/Toth in his first book. Check out a sample greeting to Nicolae Ceausescu in 1988: "Belated Happy Birthday! Stand up! You deserve it!"Truly laugh-out-loud funny stuff.One note of interest: since this is the second volume, some of the respondents are in on the joke. Those that are respond with a matching level of humor.

Published by Thriftbooks.com User , 23 years ago
I hadn't looked at my copy of the book for a couple of years, and happened to find it in the bookshelf in the garage while getting ready for a garage sale. While I sat watching people turn their noses up at my junk, I laughed myself silly at Lazlo's amazing letters. His suggestions for "Historical" TV Dinners (Jimmy Carter's Camp David Accord Chicken and Grits) finally led Swansons (aka Campbell Soups) to just ignore him -- rather than send him more coupons for soup. It's a great look into the inner working of the Public Relations departments of large corporations and governments. Whenever you're throwing a garage sale, this book is a must read. Any other time, too.

Published by Thriftbooks.com User , 23 years ago
This is an incredibly funny book! Where else can you find a letter written by Ronald McDonald?
Trustpilot
Copyright © 2022 Thriftbooks.com Terms of Use | Privacy Policy | Do Not Sell or Share My Personal Information | Accessibility Statement
ThriftBooks® and the ThriftBooks® logo are registered trademarks of Thrift Books Global, LLC