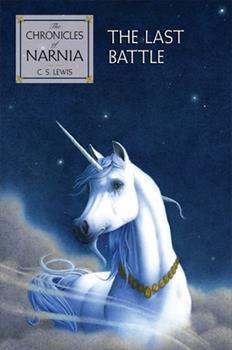 (Book #7 in the The Chronicles of Narnia Publication Order Series)

A beautiful paperback edition of The Last Battle , book seven in the classic fantasy series, The Chronicles of Narnia , featuring cover art by three time Caldecott-winning illustrator, David Wiesner, and black-and-white illustrations by the series' original illustrator, Pauline Baynes. During the last days of Narnia, the land faces its fiercest challenge not an invader from without but an enemy from within. Lies and treachery have taken root, and...

The Chronicle's of Narnia: The Last Battle

Published by Pages and Purrs , 4 months ago
I purchased this book to complete my collection of the "Chronicles of Narnia" series. Although it was labeled as "Like New," it would have been better-labeled as " Very Good" due to the edges of pages being a little worn, and the cover being scratched in a few places. Overall, though, I was pleased with this purchase.😊

Bringing the Series to a Close

Published by Thriftbooks.com User , 19 years ago
King Tirian of Narnia is thrilled to hear the rumors that, after a couple hundred years of silence, Aslan has returned to the country. But when he goes to investigate himself, he discovers that no one is allowed to see the Lion. In fact, an ape is speaking for Him. The new pronouncements are just as puzzling, including the enslavement of the talking animals. What is going on? His few allies include Eustace and Jill from our own world. But can they defeat this new evil?This book is different from others in the series because the story starts in Narnia and then brings the characters from our world into theirs. But the differences don't stop there. This is a stirring conclusion of a great series. The symbolism is strong, and I find this book one of the most interesting of the series from that standpoint. The story is probably one of the fastest in the series, with so much intrigue and fighting going on, it's hard to put down, even on a reread. The ending leaves me with a feeling of euphoria mixed with just a little bit of melancholy because the series is over.While the order the other books in the series are read doesn't matter as much, this one must be read at the end to fully appreciate it. It's a wonderful ending to a wonderful series. Don't miss it.

The "Apocalypse" of Narnia

Published by Thriftbooks.com User , 19 years ago
The world of Narnia is coming to an end. A false Aslan is abroad in the land, and the people (and beasts) struggle to follow what they think is the truth. Eustace and Jill, from The Silver Chair, are sent to Narnia to help the last king of that land rally his troops for the final battle. This is the apocalyptic volume of The Chronicles of Narnia. If The Magician's Nephew speaks of a creation reminiscent of the book of Genesis, this book speaks of an end reminiscent of that foretold in the book of Revelation. Here, everything comes to an end, and the entire purpose of the existence of Narnia is finally explained by Aslan. The Christian references are unmistakable. Aslan, like the Biblical Christ in Revelation, triumphantly comes to bring an end to his world and save his people. Most of the material in this book is very Christian-like, all the way down to the separating of the creatures on the right and left hands of Aslan. This, the final volume of the Chronicles, brings everything to a head. This book provides the so-called meaning of life, and gives validity and value to all of the good deeds the children have been trying to do since the first book. Here, the good have their reward. The descriptions in this book (especially the end) are absolutely beautiful, and the finale is nothing short of moving. Lewis, a master of Christian apology, succeeds here in bringing to life the Christian concept of the end of the world, and of the final rewards of the just. No part of the Chronicles of Narnia would be complete without the vision afforded by this, the final book.

Book 7 - A guide to the unending glory of Narnia

Published by Thriftbooks.com User , 20 years ago
"The Last Battle" is the seventh and final entry in C.S. Lewis' beloved and enduring Narnia Chronicles, and certainly is best read after first completing the other six books in the series. Narnia is faced with an apocalyptic crisis, as a false Aslan sets up rule in Narnia. The false Aslan is in fact a mere [] (Puzzle) dressed in a Lion's skin, and the real mastermind is the crafty ape who acts as his "mouthpiece" (Shift). But the faithful Narnians immediately realize something is not right: why does this Aslan not speak to them directly, why is his rule harsh, and why does he advocate an alliance with the Calormenes, the followers of Tash? As Eustace and Jill enter Narnia to assist the legitimate Narnian king Tirian in the battle against the false Aslan, the deception is slowly exposed. First posing as Aslan, the enemies of Narnia then speak about "Tashlan", and eventually about their true master "Tash". "There was no nonsense about `Tashlan' now" (p.160). The conflict between the friends and enemies of Narnia reaches a decisive battle, after which the faithful Narnians find themselves in the "true" Narnia - a home of eternal blessedness.As with all the Narnia Chronicles, on the level of children the story functions as a perfectly comprehensible and exciting fantasy adventure, but on an adult level it imparts powerful spiritual truths about Christianity by means of numerous recognizable Biblical allusions. "The Last Battle" obviously represents the final conflicts leading up to the end of the world and the return of Christ, complete with signs predicting his coming. Appropriately it features an antichrist that "apes" the real Christ with its terrible result - "he had never dreamed that one of the results of an ape's setting up a false Aslan would be to stop people believing in the real one." (p.92). Behind the antichrist is the very real power of the devil: "People shouldn't call for demons unless they really mean what they say." (p.104) "The true Tash, whom they called on without knowledge or belief, has now come among us, and will avenge himself." (p.203) Complete with apocalyptic imagery of the sun going blood red (p.196), there is a final battle which ushers in eternal life, painted by Lewis in vivid colours. The suggestion of a kind of limited universalism as Aslan accepts the unbeliever Emeth's service to the false god Tash as service rendered to him (p.205) is particularly puzzling, but is a minor weakness. So too is the perplexion notion that "Susan ... is no longer a friend of Narnia" (p.169). The concept of Narnia as the "Shadowlands" in contrast to the true Narnia is more Platonic than Biblical, but still has some merit. But there are many memorable insights, such as the reference to Christ's birth: "a stable once had something inside it that was bigger than our whole world" (p.177). But it is especially the delighful picture of the blessed afterlife that brings the Narnian Chronicles to a fitting and final climax. As

Published by Thriftbooks.com User , 22 years ago
Apocalyptic fiction has become a fashionable trend in the Christian market nowadays. Yet this book, published in 1957, proves one thing: Lewis was years ahead of his time. Although Jenkins and LaHaye are doing good detailing their fictional account of the end-of-the-world (Left Behind series), in what is taking them hundreds of pages, Lewis does in a short 200. Not that that is a bad thing, because each had different purposes. Since I'm reviewing Narnia, Narnia I will stay with.Lewis, in his only end-of-the-world book, tells of how in the last days of Narnia, there are two animals living by the Great Cauldron. One is Puzzle, a lovable Donkey, and the other is an evil ape named Shift. Shift, thru manipulation and deception, tricks Puzzle into donning a lion skin, making a false Aslan. This is representative of the Anti-Christ. It is about how the real Aslan and the real Tash come again into Narnia, and the final show down. The most stirringly majestic portion of the whole book is the last part, where the old Narnia passes away, and behold! the children and all good Narnians who love Aslan are called into Heaven, the New Narnia. This is the single most precious portion of any of Lewis's fiction. It drips of Heaven. The Power and Majesty of God on High is portrayed thru these pages. He goes thru judgement day (never mind this pre-mid-post trib stuff or debate), and then how the children react to being in heaven.An interesting concept put forth by this book is a LIMITED universalism. Emeth, who is servant of Tash, a pagan god, is found in heaven. When Aslan comes and speaks to him, Emeth says he was not servant of Aslan but Tash. Aslan says that in reality he had been serving Aslan all along, and he knew Aslan, but to him Aslan was known as Tash. In other words, Emeth's perception or view was not the real Tash, who was an evil being, but the real Aslan. To an extent, I agree that this might be possible. I feel you can have a relationship with Jesus, but know him under a different name. That does NOT mean I believe all religions send you to heaven. You still have to know Jesus, and God. The dwarves, who are in heaven, are to stubborn to let got of themselves. They perceive themselves in a horse stall (that is where the last of old Narnia is seen. It is night, and all these people in a great circle or waiting for Tashlan, which is the fusing of Tash and Aslan, exactly what the Anti-Christ is, and the children run into the tent or stall.) "The Dwarves are for the Dwarves!" This is pride. This is what it is like on earth. What to us seems distasteful, if we would really let go of our pride and let God be God, then in the end we would have ultimate joy. That is what Lewis is saying thru the Dwarves. Lewis also uses classical philosophy to educate children. The old Narnia is called the Shadowlands, mere shadows of the More Real Heaven. This is straight from Plato. The values we hold d

The Last Battle Mentions in Our Blog