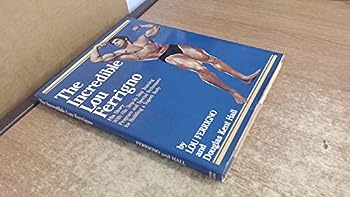 The Incredible Lou Ferrigno: His Story With His Step-by-Step Training Program and Special Techniques for Building a Superb Body

Book by Lou Ferrigno, Douglas Kent Hall This description may be from another edition of this product.

Published by Thriftbooks.com User , 13 years ago
If you are a Lou Ferrigno fan, or enjoy drug free bodybuilding this is some great inspiration. It was recommended to me by a friend, and is a very short read. The book is about Ferrigno's life growing up, and the events that led him to winning the Mr. Universe competition, and starring in the Incredible Hulk. It also contains some very basic bodybuilding routines, though they certainly aren't the reason to read the text.

Published by Thriftbooks.com User , 18 years ago
I would definately reccomend this book to anyone who is losing motivation for bodybuilding; for that matter anyone who is losing motivation for anything. Even though the book is centered toward bodybuilding it shows how the HULK, Lou Ferrigno, had to go through so many things in his life to become what he is now. He has a severe hearing problem which all of the kids at his school made fun of him for, his father was trying to control his life and was constantly being negative toward Lou, along with almost killing him (talked about in his second book Lou Ferrigno's Guide To Personal Power, Bodybuilding, And Fitness). There were so many negative influences that I won't name them all, but it's amazing how he was able to rise up above all that and become in my and many others opinion to be the best bodybuilder ever! When ever you think you have it hard re-read this book and realize that if Lou Ferrigno could become one of the best bodybilders and be a movie star with all the problems he had to go through, you too can achieve anything. He also has a great bodybuilding section in his book making it even more complete on how to build an impressive physique in the minimum amount of time.
Trustpilot
Copyright © 2022 Thriftbooks.com Terms of Use | Privacy Policy | Do Not Sell My Personal Information | Accessibility Statement
ThriftBooks® and the ThriftBooks® logo are registered trademarks of Thrift Books Global, LLC