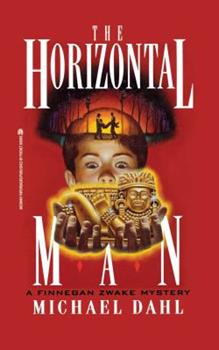 (Book #1 in the Finnegan Zwake Series)

I DON'T KNOW WHY I FELT SICK. I MEAN, YES, IT WAS THE FIRST DEAD BODY I EVER SAW. BUT I SHOULD HAVE BEEN MORE COMFORTABLE. AFTER ALL, MY WHOLE FAMILY LIKES DEAD THINGS.... Thirteen-year-old Finnegan Zwake is staying with his Uncle Stoppard, a bestselling mystery writer, and still hoping his parents will return from an archaeological expedition in Iceland. They disappeared there several years ago. Life with his uncle is fairly normal -- until the day...

Published by Thriftbooks.com User , 17 years ago
The book The Horizontal Man by Michael Dahl is a really good book! It's about a 13 year old kid named Finn and his uncle Stoppard. Uncle Stop is a mystery writer. Finn and uncle Stop solve several mysteries. They find out who took the Horizontal Man. They also find out who killed Larry. I liked this book because it's a really good mystery book. Finn stays with uncle Stop because his parents have been in Ice land for 7 years! This is the greatest book ever. So read the book!!!!!!

The beginning of an enthralling series

Published by Thriftbooks.com User , 18 years ago
Finnehan Zwake WAS a normal 13-year-old boy. That was until his parents, archeologists both, went missing after going to Iceland for an expadition. They've been gone, supposed dead, for seven years, during which time Finn has lived with his Best-selling mystery writting Uncle Stoppard. Finn hads grown into an almost normal life, until he discovers the dead body in the basement.Killers and thieves, stolen gold and excavations, a boy and a nutty writer... culminating in a family secret. But mostly this whet's Finn's tongue for adventure. He won't stop until his parents are home and safe, however many books that may take.I truly enjoyed this book, it is the start of a series I hope doesn't end any time soon.

Published by Thriftbooks.com User , 20 years ago
This book kept me captivated until the very last page! Finn Zwake and his Uncle Stoppard are just living normal lives, until Finn sees a certain gold statue, The Horizontal Man, in his neighbor Pablo's apartment. The same Horizontal Man that his parents, who were...I mean, ARE archeologists...the same Horizontal Man that they found when digging in Agualar. "You threw up on a Horizontal Man?" asks his uncle when Finn unsuccessfully attempts to explain what has happened. This leads to reminding his uncle that they have loads of gold in their storage room in the basement--which is shared with Pablo, by the way--and they find the gold (which was, just like the Horizontal Man, all from the Agualar expedition) along with something else. A dead body. "Before I saw the dead body, I used to like raisins," claims Finn in the first sentence of the book. From that sentence on, the book is one of the most hilarious mysteries I have ever read. Perfect for fans of A Series of Unfortunate Events by Lemony Snicket.

Published by Thriftbooks.com User , 21 years ago
Dahl provides some new insight into the traditional young-detective genre with the oh-so-curious Finnegan Zwake. His first mystery is thoroughly drawn and funny. The only jarring detail was that I thought there was one misleading bit and not enough clues to divulge the identity of the murderer. All in all, though, a good debut novel with very interesting central characters.

Published by Thriftbooks.com User , 22 years ago
This is a great book for both kids and adults. I found Finnegan Zwake to be a charming and inquisitive 13 year old who is up for the challenge of a murder mystery. This is very well written, and kept me guessing right up until the very end. Perfect balance of suspense and humor -- I eagerly await the second installment of Finn's adventures!
Copyright © 2022 Thriftbooks.com Terms of Use | Privacy Policy | Do Not Sell My Personal Information | Accessibility Statement
ThriftBooks® and the ThriftBooks® logo are registered trademarks of Thrift Books Global, LLC