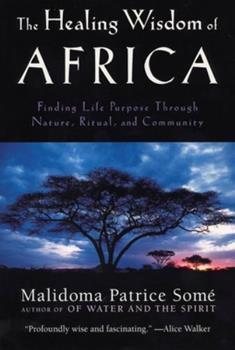 The Healing Wisdom of Africa: Finding Life Purpose Through Nature, Ritual, and Community

Through The Healing Wisdom of Africa , readers can come to understand that the life of indigenous and traditional people is a paradigm for an intimate relationship with the natural world that both surrounds us and is within us. The book is the most complete study of the role ritual plays in the lives of African people--and the role it can play for seekers in the West.

Ruminations/rituals to get in touch with African cosmos

Published by Thriftbooks.com User , 18 years ago
To be truthful, this book needs to be read through more than once - it needs to be lived with, and at least a few of the exercises and ceremonies or variants of them must be worked through by the reader.Malidoma's two earlier books, both obvious 5-star efforts, were more at expository essay and autobiography respectively. Both were jammed full of insights and plentiful quotable passages. And both were sumptuous with detail and inspiration.Part One of this new volume is not an exception to this - though maybe a little drier in overall tone - still, I found myself leaving little quotes from it on my friend Cynthia's answering machine, for which she later thanked me profusely. But the purpose of Part Two is to illustrate these illuminations/insights by things to actually do in order to begin feeling your connection with nature and the other elements of the Dagara cosmos. And throughout, Malidoma continues his critique of Western cultural and religious milieu in contradistinction to African ways and means. There have been other terrific hands-on tutelages allowing a Euro-American to shed parts of his/her dualistic/rationalistic skin in exchange for an animistic one (Starhawk's 'The Spiral Dance', Harner's 'Way of the Shaman', Teich's 'Jambalaya', Ingerman's 'Soul Retrieval', Villoldo's 'Shaman Healer Sage', and Malidoma's wife Sobonfu Some's books). This is the latest "next best thing", and it's really a good one.One thing about Malidona is that he warns the neophyte to at times exercise some degree of caution - diving headfirst into a new cultural scenario is not always the wisest or safest path. One's ability to tread lightly can bring dividends and rewards.I am also reminded of some advise from another Dagara whom I know, who says that not all of Malidoma's writings are agreed upon by Dagara people in general - which makes me think that Malidoma's admitted adaptations are sometimes less than authentic, and more at distillations meant for those somewhat plagued by their Western minds. This may end up being a blessing in disguise - I don't know for sure.I do know that the Malidomas have been on the workshop circuit in the U.S. and elsewhere for well over 10 years, and that there is a lot of cross-fertilization occurring amongst workshop presenters of far-flung cultural modalities. It's quite difficult to distinguish the chicken from the egg, and even sometimes the egg white from its yolk. There are many 'resonances' I have noticed between Alberto Villoldo's teaching (both oral and written) and Malidoma's. But if this is an effect of the collective unconscious, and/or of universal consciousness, or it's at least partly conscious borrowing, I have no easy way of knowing or finding out. Sometimes if it works, you just practice it, and/or if it feels right, you just do it.

Published by Thriftbooks.com User , 19 years ago
For those of African descent who want to know more about the religious and cultural practices of their ancestors, this is a particularly good source. It appears to be written with openness and honesty by one who has crossed several cultures outside of his West African origins. I imagine it is also a good source of information for those who are not of African descent, but have an interest in enhancing their spiritual journey through an understanding of religious and cultural practices in diverse cultures throughout the world.Before reading this book, I had never heard about the West African country of Burkina Faso, even though history reveals that my heritage has its roots somewhere in West Africa. I have read extensively about the religious beliefs and practices of the Yoruba people of Nigeria, central to which is the worship of the Orishas. I continue to read about other African religions. Central to all such religions that I have read about so far is the reverence to spirit and rituals. Very important to these rituals is the use of the elements of Water, air, fire and earth (minerals). This approach to worship of the Divine is most revealing and seductive, as it challenges some of the practices of Christianity and other western religions. At the same time, if one examines more closely the essence of all religions, there is a commonality about them all.I am by no means an expert on this, just a seeker. As I continue to read and observe, "The Healing Wisdom of Africa," is yet another step in my journey to connect the dots for myself. For each person who makes that journey, the dots will be connected differently because religion is a very personal experience. However information from people like Malidoma Patrice Some, can help one in contemplation of which dot is the next dot to connect in the sequence. Five stars.

Published by Thriftbooks.com User , 21 years ago
I am reading this book with great pleasure and anticipation. After completing 1/3 of it, I feel compelled to recommend it to people interested in spiritual awakening. Attending Catholic school for 8 years dulled my senses to the spiritual world and the positive knowledge it has to offer. I have been frightened to learn more about spirits, and this book has made me fear them and death less. I also have a better value of community and ancestors as a result of reading this book. Thank you Prof. Some for sharing your scholarship and knowledge of indigenous African beliefs.

Published by Thriftbooks.com User , 22 years ago
I have read this book along with all of Malidoma's works. I believe Malidoma has one of the best skills at articulating the problem that Western/European reality has posed on the rest of us. I personally do not use the specific rituals that he recommends because I have rituals that my own culture prescribes; however, I think any person that is ready to take a spiritual advance need to read this book and put his suggestions to practice. I have met Malidoma and found him to have a beautiful spirit filled with wisdom and the innocence of a child. I believe that anyone can trust what this teacher has to say. I also recommend this book for all priests and healers in the world because Malidoma has touched something that need not be ignored if we are to heal ourselves and others. Thank you Malidoma.

Malidoma Some addresses himself to spiritual healing

Published by Thriftbooks.com User , 22 years ago
In his latest book, Malidoma Some talks about how the wisdom developed over millenia by indigenous people in Africa can be used to deal with the very real psychological and spiritual impoverishment of the West. He says that while the West has an abundance of material goods (taken in large part from the natural resources that belong to all living creatures), Africans possess the capacity of enriching their own lives by communicating through rituals on a continuous basis with what he calls the "other world", the world beyond the material senses, or what Carlos Castaneda would call the "human inventory". Some recommends getting in touch with our ancestors and keeping them in our lives by devoting shrines to them and opening a dialogue with them. This makes particular sense to someone who has lost someone close and feels a great lack between the material message that the person is dead and therefore gone, and the feeling that somehow one has not really disconnected. Some also recommends frequent grief rituals (not just when suffering a loss but all the time) to keep the spirit in tune, and purged of the daily wear and tear of living. It is a wonderful book: humane, wise, well-thought out and very well written. A real joy for someone looking for a new way of dealing with life.
Copyright © 2020 Thriftbooks.com Terms of Use | Privacy Policy | Do Not Sell My Personal Information | Accessibility Statement
ThriftBooks® and the ThriftBooks® logo are registered trademarks of Thrift Books Global, LLC