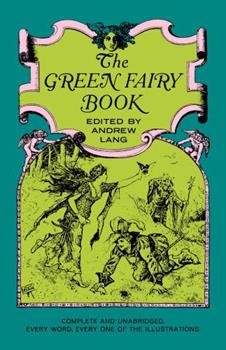 (Part of the The Rainbow Fairy Books Series)

It is almost impossible to envision what childhood would be like without the enchanting world of fairyland. Princess Rosanella, The Three Bears, giants and dwarfs, monsters and magicians, fairies and ogres -- these are the companions who thrill young boys and girls of all lands and all times, as Andrew Lang's phenomenally successful collections of stories have proved. From the day that they were first printed, the Lang fairy tale books of many colors...

Published by Zimmy , 1 year ago
First book I ordered and it was listed as acceptable condition. It is and no complanted.

Published by Thriftbooks.com User , 13 years ago
My children and I use the Fairy Books series as part of our homeschooling program. We just love them.

Exploring the new and familiar

Published by Thriftbooks.com User , 14 years ago
Andrew Lang's "The Green Fairy Book" is a definite must-have simply because of the variety of the stories. Many are comfortable, familiar, and traditional while others had definite writers and are a little less well-known. It's a great and enjoyable mix of tale titles; however, I was a little dissapointed that too many of the tales were essentially the same. I realize that this happens often in fairy tales, but it's still preferable to keep them out of the same book. Other than that, this is another fairy tale masterpiece for fans of the Lang collection.

Published by Thriftbooks.com User , 18 years ago
Andrew Lang just continues to spit out one greatr book after another. His stories are vivid and follow the plot they were meant to follow. This book contains 42 stories and 98 black and white pictues. Some of the stories in this book include:Prince Narcissus and the Princess Potentilla,The Three Little Pigs,The Enchanted Ring,The Magic Swan,The Crystsal Coffin, The Riddle,The Three Musicians, and more.

Published by Thriftbooks.com User , 20 years ago
The Green Fairy Book has stories from Spanish and Chinese traditions and a few written by the Comte de Caylus. Also stories by Sebillot, Fenelon, Kletke, Mme. de'Aulnoy, and the Brothers Grimm. Includes The Bue Bird, Sylvain and Jocos, Prince Narcissus and the Princess Potentilla, The Three Little Pigs, and The Half-Chick. 42 stories.

Published by Thriftbooks.com User , 23 years ago
Andrew Lang's colored fairy books are justifiably famous, and this (along with "The Red Fairy Book") is one of the best of the series. As in all the volumes, the prose is clear and swift, moving the tales along. Since this was the third book in the series, he was not yet scraping the barrels of world fairy tales for the leavings; contrariwise, however, the first volume (Blue) has all of Ye Olde Stand-byes, while this and Red have tales just as wonderful that are less well known.Despite Lang's flaws -- most notably, his heroines have a way of turning passive -- there are far worse ways to introduce a child to the spirit of wonder tales than this volume.
Copyright © 2022 Thriftbooks.com Terms of Use | Privacy Policy | Do Not Sell My Personal Information | Accessibility Statement
ThriftBooks® and the ThriftBooks® logo are registered trademarks of Thrift Books Global, LLC