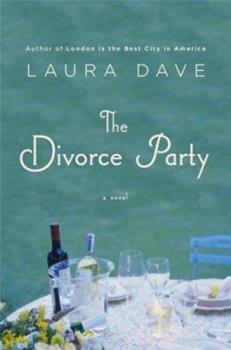 The second novel from the acclaimed author of"Eight Hundred Grapes" " Sizzle Factor: SPF 50. A secret marriage, lies about affairs . . . even sex on the day of the divorce party" ("USA Today")-the hottest beach read of the summer Laura Dave is widely recognized as an up-and-coming talent in women's fiction. Now, with her characteristic wit and warmth, she captures a much-discussed cultural phenomenon that has never been profiled in fiction before-divorce...

DECONSTRUCTING A MARRIAGE AND A LIFE

Published by Thriftbooks.com User , 12 years ago
What kind of a couple throws a huge party on their thirty-fifth anniversary to celebrate, not the event itself, but the fact that the marriage is ending? This particular divorce party is marking the end of a coupling that others thought would survive anything--the Huntingtons come from a family of survivors on this island of Montauk. And Gwyn and Thomas seemed to be the perfect couple. As the guests assemble for this lavish get-together, another couple, just beginning their journey together, is also coming from a home in Red Hook, near Brooklyn, NY. This will be Maggie's first introduction to her fiancé's family. Nate has said little about them; in fact he seems unusually reticent. Then on their trip to Montauk, through a series of chance meetings along the way, Maggie first glimpses some of the secrets Nate has kept from her. The cracks in the thin veneer that protect them are spreading and threatening to burst. Her first doubts appear. More is revealed in the first days in Montauk, and the journey may abruptly end unless something drastic happens. Meanwhile, we see Gwyn's story unfolding, layer by layer, as she relives through memories the journey she and Thomas have taken. And we slowly learn why Gwyn has chosen this particular venue--the divorce party--to mark the demise of the marriage. Alternately told in Gwyn's and Maggie's voices, we discover what it means to build a life with someone and how, by making very different choices, two different women learn how to create the lives they most want to lead. What are the secrets Nate has kept, that threaten his new relationship? And what motivates Gwyn to choose this very public setting to end hers? Is there more she hopes to unleash? And will she get the results she seeks? These are some of the questions resolved in these pages, giving The Divorce Party: A Novel a resounding five stars, in my opinion.

Published by Thriftbooks.com User , 12 years ago
In a breath-taking mansion beautifully nestled on the peaceful Long Island Sound, Gwyn Huntington is busy putting the final touches on what is sure to be the most talked about party ever to have been thrown in Montauk. Unlike previous celebrations that have filled the home she shares with Thomas, her husband of thirty-five years, this one marks a chapter of her life that she quite frankly fears to tread...the dissolution of her marriage. At exactly what point and time her relationship began to unravel is still quite unclear to Gwyn. Together, Thomas and she were the pillars of their community. Even their two grown children, Nate and Georgia, are oblivious to the discord in their parents' union as is everyone else in their tiny town. The near-perfect relationship emulated by their closest friends is quickly falling apart. Brought together under such dire circumstances, they choose to reunite at the family compound one last time to celebrate what is soon to be a distant memory. This family quickly learns that as with any relationship, there is more than just one side to the story. With the party nearing, secrets that perhaps would have been better left untold are suddenly revealed and the simple task of ending a relationship takes on a life of its own. What really happened between Gwyn and Thomas that made them throw away thirty-five years of marriage without giving one another a second chance? When is the right time to leave or is it better to stay and fight for what is truly yours? The second novel by the talented and extremely gifted writer Laura Dave, THE DIVORCE PARTY incorporates the very essential elements of life into a beautifully written tale of love. Despite the brevity of the novel, Dave is able to encapsulate the pain and suffering akin to the break-up of a marriage into an intricately woven plot. Although the story tugs at the reader's heartstrings, it also highlights glimmers of hope in the life of the courageous woman at the center of it all.

A lovely and moving read

Published by Thriftbooks.com User , 13 years ago
The Divorce Party is one of the most oddly moving books I've read in a long time. Since I finished reading it, I have been trying to sort out what, exactly, makes it work so well. Certainly, it captures the emotions of complex people in complex relationships in incredibly lovely prose. It is funny, and surprisingly heartwarming, and hard to put down. And yet it goes beyond that somehow, in a way that so few books do. There is some little bit of magic that it delivers. It leaves you hopeful for your own relationships, and for your ability to embrace your future, whatever it has in store.

Published by Thriftbooks.com User , 13 years ago
Laura Dave is an amazingly talented writer. Her first book, London is the Best City in America was incredible, and this one might even be better if that's possible. Once again, the insight into the many layers of each of the characters is impressive and makes you realize how so many things in life are simple and complex at the same time. Even though the book takes place over a single day, by the end it seems that you've known the characters for a long time.

Published by Thriftbooks.com User , 13 years ago
Set in Montauk, this novel tells the story of two women, Gwyn, who's getting ready to end her 35-year marriage, and her future daughter-in-law, Maggie, who's learning just how little she knows about her fiancé. Smart, insightful, and gorgeously written, The Divorce Party is a must-read for anyone who appreciates good fiction.
Copyright © 2022 Thriftbooks.com Terms of Use | Privacy Policy | Do Not Sell My Personal Information | Accessibility Statement
ThriftBooks® and the ThriftBooks® logo are registered trademarks of Thrift Books Global, LLC