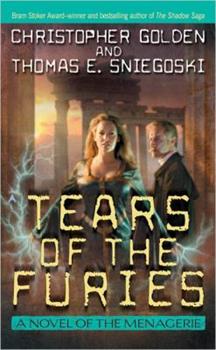 The Tears of the Furies: The Menagerie #2

(Book #2 in the The Menagerie Series)

Meet the Menagerie--as hodge-podge a mix of other-worldly beings as anyone can imagine. But a sorcerer, a scientist, a sixteen-year-old demon, and the others all have one thing in common: a hunger for justice--no matter what the cost.

Published by Thriftbooks.com User , 16 years ago
This second novel in the Menagerie series was fantastic. I totally agree with the previous reviewer, however. It had some very slow parts, but then finally seemed to kick into overdrive the last half of the novel. I love the various characters that comprise the Menagerie. This novel, like the 1st one, was full of dark magicks, action, and cool monsters from straight out of a twisted myth. Definately worth your time to read.

A Most Worthy Sequel!!

Published by Thriftbooks.com User , 16 years ago
Where the 1st Menagerie novel - The Nimble Man - started, this 2nd one carried on to give me a fine and most enjoyable and exciting read. Now don't get me wrong, it had a few bumps along the way, about midway. Where this novel started out pretty good and interesting, it all the sudden took a nose dive about a 1/3 of the way in, and I almost put it down without finishing it. A few times. But then, all of the sudden, the monotony that the 1st reviewer mentioned wore off, and it was like one of the writers - most likely Christopher Golden - took over and gave it that extra and much needed UMPH! (Sorry, Mr. Sniegoski if I am wrong.) The last half of the book is filled with Olypian-sized action/adventure, with very creative settings and action-filled scenes that never let up. I liked the twist and turns of this novel, too. There were some cool surprises mixed in with all the bloody mayhem. The creatures of Olympus here were written very well, giving it a much needed overhaul that fit this dark fantasy a living, breathing world, (or Underworld, I should say!), that breathed new life into magnificent old myths and legends. I enjoyed it immensely. And you should, too. Just read through the ho-hum parts, and the real meat and potatoes of the story unfold like a runaway locomotive. Truly exciting.

Published by Thriftbooks.com User , 16 years ago
Tears of the Furies, the second in the dark fantasy series THE MENAGERIE, does not disappoint. Once again, Golden and Sniegoski have conspired to create an action-packed story that weaves classic mythology together with intrigue and suspense. The characters introduced in the first book, The Nimble Man, are all present and accounted for. This is a strong sophomore release, because character development is key. The relationship between Doyle and Ceridwen continues to strengthen and distract them both. Danny is also in the forefront; being a teenager and a changeling, he and his mother must deal with his physical changes as well as his emotional outbursts. Readers also learn more about the past of the stalwart Dr. Leonard Graves. The cast is intelligent as well as witty. One-liners by hobgoblin Squire never fail to amuse. His obsession for Skittles is also revealed. Eve, the fallen vampire, still dresses in designer clothes when she's going into battle. Tears of the Furies dives head-first into Greek mythology. Not only will readers cross paths with the vindictive Furies, but with Orpheus, the Ferryman, even Cyclops. Medusa is at the core of the story. The Gorgon is a vengeful ex-beauty, and the team tracks her as she turns a multitude of people into stone. Persons from Doyle's past come into play, opening up another can of worms. I look forward to the next book in The Menagerie series, because the first two installations were page-turners which kept me engrossed from start to finish. I am eager to see what the authors come up with next.
Copyright © 2020 Thriftbooks.com Terms of Use | Privacy Policy | Do Not Sell My Personal Information | Accessibility Statement
ThriftBooks® and the ThriftBooks® logo are registered trademarks of Thrift Books Global, LLC