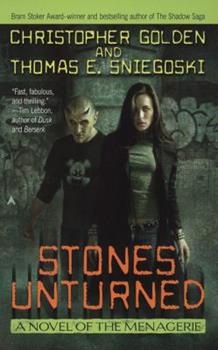 (Book #3 in the The Menagerie Series)

The Menagerie at the edge of the abyss. A powerful, demonic force seeks Danny Ferrick, a changeling and the youngest member of the Menagerie. Now Doyle's team must race to save their friend from falling into the darkness-and taking all of humanity with him.

Published by Thriftbooks.com User , 14 years ago
I am quite surprised to see that this series hasn't received the praise that I think it deserves. I was a fan of Golden's writing from his Buffy novels but have since sought more novels from this author. I've read almost all of his books mostly because I am a fan of anything with a supernatural twist. Some of Golden's other series, the "Myth Hunters" in particular, I found less than enjoyable. That series was somewhat of a bore in my opinion. To a lesser degree "The Ghosts of Albion" was okay but didn't make a great impression either. But overall I find I gravitate to his style of writing. The Shadow series was my favorite Golden series until now. I definitely would recommend those books to anyone who loves a great vampire story. It adds a new take on the genre and the characters are interesting. But I think I prefer "The Menagerie" series even better. Co-authored with Thomas Sniegoski, The Menagerie initially seems like a rip-off of "The League of Extraordinary Gentlemen." I never read the comic books on that series but I saw the movie. And if not for my high regard for Golden's work, would have stayed away from this series because of how bad the LOEG movie was! Luckily, the similarities lie only in the overall idea of a diverse group of supernatural beings banding together to save the world. I've read all 3 offered to date and am looking forward to the 4th book due out sometime this summer (2007). "The Menagerie" is a fun read. If you're a fan of the genre it's worth looking into.

Published by Thriftbooks.com User , 15 years ago
The latest 3rd novel by these two illustrious writers of this series takes dark fantasy readers on a ride of self discovery and into dark mystery in a double-sided storyline. Although I enjoyed both storylines, the very end kinda stunk in a way. I didn't feel fullfilled as a reader in the last 40 pages or so. But, all in all, this was a solid yarn. Look forward to more of the building up of the oncoming Demogorgon war to come. Highly recommended for those who like dark fantasy.
Copyright © 2020 Thriftbooks.com Terms of Use | Privacy Policy | Do Not Sell My Personal Information | Accessibility Statement
ThriftBooks® and the ThriftBooks® logo are registered trademarks of Thrift Books Global, LLC