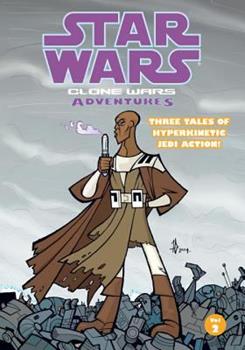 Inspired by the Cartoon Network's "Clone Wars" cartoons, this series tells "new" stories of heroism and villainy in the same stripped-down visual style. In the rolling asteroid rings above a remote planet, General Obi-Wan Kenobi and Anakin Skywalker play a deadly game of cat and mouse against Separatist droid fighters-and a squadron of highly skilled human pilots who have pledged their guns to Count Dooku. Find out why Anakin is known as the greatest...

Published by Thriftbooks.com User , 13 years ago
Though there are only three small stories in this volume, they are packed with plenty of action, adventure, and some ties to the original movie. The first story has scenes from A New Hope at the beginning and end. They each have something to do with the story. The third story involves Mace Windu battling Seperatist battle droids, and has a very small link to A New Hope. Even if you are not a fan of the prequel trilogy, this book will probably be enjoyable to you. If you are a fan of the prequel trilogy or both trilogies, you will probably like this book. It features General Grievous, plenty of battle droids, and eack story includes the amazing exploits of the Jedi. This is a very good read for Star Wars fans, young and old. Also, just a small warning, the cover of the book may have Mace Windu on top of brocken battle droids blowing smoke off his lightsaber. I don't know if all copies have that, or if only some do but be aware that the cover of the book may differ from the picture on this website if you but it.

My 9 year old son loves these

Published by Thriftbooks.com User , 13 years ago
My nine year old son loves these books. I wanted to note that the cover they show on this book is not accurate. It is supposed to be a photo of Windu blowing the smoke off his light-saber atop a heap of carved up battle droids.

Books to excite kids who don't like to read

Published by Thriftbooks.com User , 14 years ago
My grandson, who is dyslexic, loved the first six volumes in this series. He wouldn't go to bed until he had read all six!

Strong second volume in the series

Published by Thriftbooks.com User , 15 years ago
Star Wars: Clone Wars Adventures is an ongoing series from Dark Horse comics that takes its inspiration from the extremely successful Clone Wars cartoon series. This inspiration is visible in both the short, action-packed nature of the stories as well as in the art style itself. Volume Two contains three stories as follows: 1) "Skywalkers" - Like Volume One, this book kicks off with an Obi-Wan/Anakin adventure. Their aerial antics defending the planet Terra Sool stretch belief about as far as this format can take it, but the cartoon did the same thing on more than one occasion. The chief distinguishing feature of this tale is the use of scenes from A New Hope to bookend it, making for an effective emotional underpinning to the action. 2) "Hide in Plain Sight" - Jedi Master Luminara Unduli and her Padawan Barriss Offee defend Nadiem against a Separatist attack personally coordinated by General Grievous. Great story all around, with a perfect balance of dry humor and fun Jedi action. The art in this one is particularly well done: the panels are jam-packed with small background details. 3) "Run Mace Run" - Shorter than the first two stories, Mace is involved in a nasty gunship crash on a Separatist-controlled planet. He must shake off the effects and stop a planet-destroying weapon from being tested. Yoda's Zen-like advice wafts through his head along the way. Not much substance to this story, but it does have a cool ending. The first three volumes of this series use lower-quality paper than volumes IV and up and present ads for Dark Horse/Gentle Giant products between each of the stories. The choice to eliminate the ads and improve the book quality for subsequent volumes was a good one and makes the later books feel less disposable. Clone Wars Adventures Volume Two continues the high standard set by the first volume.
Copyright © 2020 Thriftbooks.com Terms of Use | Privacy Policy | Do Not Sell My Personal Information | Accessibility Statement
ThriftBooks® and the ThriftBooks® logo are registered trademarks of Thrift Books Global, LLC