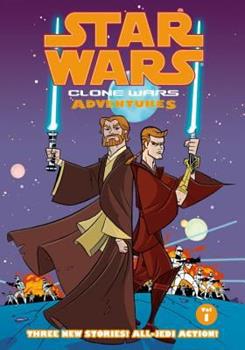 Inspired by the Cartoon Network's "Clone Wars" cartoons, this series uses the television show as a jumping-off point to tell "new" stories of heroism and villainy in the same stripped-down visual style. On the night-world of Nivek, Obi-Wan Kenobi and Anakin Skywalker must first overcome the limitations of fighting in the dark before they can take on the dreaded Shadowmen Meanwhile, Jedi Masters Mace Windu and Saesee Tiin discover that push can come...

Good kickoff to a fun series

Published by Thriftbooks.com User , 15 years ago
Star Wars: Clone Wars Adventures is an ongoing series from Dark Horse comics that takes its inspiration from the extremely successful Clone Wars cartoon series. This inspiration is visible in both the short, action-packed nature of the stories as well as in the art style itself. Volume One contains three stories as follows: 1) "Blind Force" - Obi-Wan and Anakin journey to Nivek, a planet perpetually shrouded in darkness (earning it the somewhat obvious nickname "The Night Planet"). This story is an enjoyable look at the heroes' Master-Padawan relationship in the early months of the war and showcases Anakin's raw strength in the Force. It uses lighting creatively to illustrate the difference between relying on one's eyes to see and using innate powers within. 2) "Heavy Metal Jedi" - Mace Windu and Saesee Tiin engage in light banter while wiping out hosts of Separatist droids, including one serious boss droid, at the Battle of Iktotch. There's a wonderful three-page vignette mid-story. It depicts the action from the viewpoint of a super battle droid suffering the misfortune of being used as a projectile weapon by the Jedi. I had a little trouble with the art in the last two pages; there seemed to be some scale difficulties regarding just how big the boss super battle droid was, exactly. 3) "Fierce Currents" - Kit Fisto tools around underwater on Mon Calamari looking for the source of a disturbance he feels in the Force. The cartoon episode featuring Kit Fisto was a visual delight and it's terrific to see that built upon in this story. Kit discovers what is causing the unrest in the ocean and manages to leave the Mon Calamari and the reader with a tidy moral lesson at the end to boot. The first three volumes of this series use lower-quality paper than volumes IV and up and present ads for Dark Horse/Gentle Giant products between each of the stories. The choice to eliminate the ads and improve the book quality for subsequent volumes was a good one and makes the later books feel less disposable. Clone Wars Adventures Volume One is a quality kickoff to the series featuring three solid and engaging stories.

Published by Thriftbooks.com User , 16 years ago
My six year old son is going through the "Star Wars Phase," my mother says I also went through. These books are written on a level he can read on his own with stories that keep him interested enough to read them more than once. I was glad to find them online as our local bookstores and even comic book shops don't carry them!
Copyright © 2020 Thriftbooks.com Terms of Use | Privacy Policy | Do Not Sell My Personal Information | Accessibility Statement
ThriftBooks® and the ThriftBooks® logo are registered trademarks of Thrift Books Global, LLC