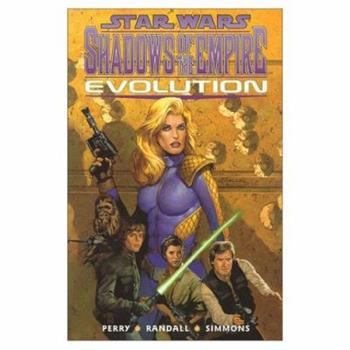 Guri is a beautiful human-replica droid, and the personal assassin for the leader of the Black Sun criminal organization. When Black Sun is destroyed, this bounty hunter herself becomes the target of... This description may be from another edition of this product.

Published by Thriftbooks.com User , 19 years ago
I am reviewing Shadow of the Empire ? Evolution ISBN 156971441X A Dark Horse TPB Ccomic published Feb., 2000 at 120 pages, printed in Canada. This is the one with the blond Guri dominating the cover. Not the one with Boba fett dominating the cover. Sorry for all that, but some of the reviews here are for the first SHADOWS comic based on the novel. This comic, Evolution, is not based on a book but rather collects 5 issues into one story called a TPB. Evolution picked up after the apparent death of Xizor in SOTE, which took place between ESB and ROTJ in year 3 After New Hope on the timeline. Evolution takes place at about the same time as ROTJ in year 4 ANH. This is a story featuring Guri, Xizors personal assassin. She is a beautiful, blond human-replica droid who likes reflex blue outfits and wonders if a droid can dream. Steve Perry, the author that brought us the SOTE journey joins Dark horse as the story writer.This comic was produced at a time that the inking, coloring and manufacturer techniques were starting to produce superior looking comics. Because it was made in Canada, the binding is excellent, a problem with later TPB comics made in China.The art style is cartoonish, one I generally do not care for, but it works here. Regardless of whether you like the cartoonish style, the pencil art is excellent and detailed. An interesting thing that I noticed was that special care was taken to draw Luke and Leia to look like the real actors that they are. Dark horse has been criticized by me and others for allowing their artists to just wing in when drawing Luke, Leia and Lando. The SW reader knows what these 3 people are supposed to look like, and a lazy pencil artist can?t fly that one past us. Well I say all that to congratulate the Artist and editor here for getting Luke and Leia right. Oh yes, if you like to look at the female body as an art form, you will like this comic. At times it is sexy without being obscene so you can still read it to your 5 and 6 year kids.The inking and color here are almost awesome. By 2002 the process that they are evolving will mature into jaw dropping visual art. This one was pretty close. SPOILER!! Guri doesn?t die in this comic. I seem to remember listening to a book on tape where Guri came up in the story, but I can?t recall if it was a NJO or Prequel book.With the pencils, ink and color all rated at 3.5 to 4, and a story that is good, 3 to 3.5 I decided that this is a 4 star effort and a recommended read.
Trustpilot
Copyright © 2022 Thriftbooks.com Terms of Use | Privacy Policy | Do Not Sell My Personal Information | Cookie Preferences | Accessibility Statement
ThriftBooks® and the ThriftBooks® logo are registered trademarks of Thrift Books Global, LLC