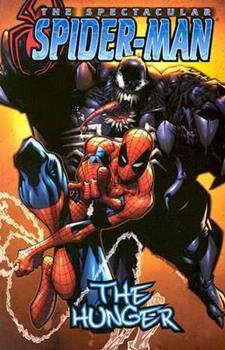 While Peter Parker deals with his feelings over the crippling of one of his friends, his alter-ego, Spider-Man, must deal with the half-human, half alien symbiote, Venom.

To my surprise a first rate Spider-Man/Venom storyline

Published by Thriftbooks.com User , 17 years ago
I do not know why Marvel decided to stop producing "Peter Parker: Spider-Man" and replace it with "The Spectacular Spider-Man." After all, it is not like there is less about Spider-Man's secret identity in this or any other one of the web-heads comic book titles. Anyhow, in my Popular Culture class we have a comic book unit where students read "The Essential Spider-Man, Volume 1," which has "Amazing Fantasy" #15 and the first twenty issues and annual of "The Amazing Spider-Man." They put together a model of the defining elements that appear in most Spider-Man comic books and then pick up a current copy of "The Amazing Spider-Man," "The Spectacular Spider-Man" or "Ultimate Spider-Man" to see how that issue stacks up against their model. Usually their are some significant differences between now Peter Parker is married and has a real job as opposed to being a teenage science nerd. But their biggest complaint is that most of the issues they pick up today are always only one part of a continuing story. That makes it rather hard to pick up a single issue and get hooked, which is why Marvel has rectified that particular problem by having trade paperback collections of specific story lines. "The Spectacular Spider-Man, Volume 1: The Hunger" has the first five issues of the comic and a confrontation between Spider-Man and Venom put together by Paul Jenkins (writer), Humberto Ramos (penciler) and Wayne Faucher (Inker). A series of assaults in New York City have left behind victims who are seemingly unconnected in a strange coma: each victim has been drained of their adrenaline and the only clue is a set of small puncture wounds just above the kidneys. While the cops are investigating Peter is feeling guilty over Flash Thompson's condition (the Green Goblin put Flash in a runaway truck and he ended up with severe brain damage). While on patrol Spider-Man runs into the twisted form of the half-human, half-alien symbiote known as Venom. Of course, Venom is responsible to for those attacks. However, the twist in this particular story is that Venom is no longer linked to Eddie Brock and the suit is looking for a new host. Venom was never one of my favorite Spider-Man villains, especially the more he kept coming back. But "The Hunger" ends up being the best Venom story I can recall reading because it offers an interesting reinterpretation of the relationship between the suit and Eddie, which involves Spider-Man as well. This is not as earthshaking as finding out the Swamp Thing is really an elemental force of nature rather than a guy caught in between an explosion and a serum, but it does turn Eddie Brock into a tragic character as we find out why he hates Spider-Man and what the symbiote really wants as well. More importantly, in the end it puts Spider-Man in the position of having to make another one of those damned-if-you-do-damned-if-you-don't decisions that is a core part of the Spider-Man mythos that is aptly captured by Spider-Man's final

Published by Thriftbooks.com User , 18 years ago
Finally a good Venom story. Here's some pros and cons... PROS: 1. Eddie Brock is now more sympathetic; we see why he REALLY hates Spider-Man now, and it makes more sense. 2. If you knew nothing about Venom before this story, you wouldn't be lost. Everything is fleshed out well and I can almost say that this is Venom's "Killing Joke" story - definitive. CONS: 1. Ya know.. the art is cool and all, but does Venom HAVE to be so huge? Ramos once drew a picture of Spidey and Venom fighting for a WIZARD magazine special and Venom looked right. Here... I dunno. 2. *SPOILER* The whole "A child grows within me" thing seemed pointless to me. It came out of nowhere. I guess that adds to the whole reason for its need for survival, but c'mon, Venom has had like 6 kids by this point. We have yet to see this new offspring and hopefully we won't anytime soon. Thanks for reading... Hope I was of some help.

Published by Thriftbooks.com User , 18 years ago
i thought this was a good story, in a nut shell, venom can no longer put up with eddie brocks dying body, so he goes after spider-man to use as a host, i realy loved the art here, and the writing is good aswell
Trustpilot
Copyright © 2022 Thriftbooks.com Terms of Use | Privacy Policy | Do Not Sell or Share My Personal Information | Accessibility Statement
ThriftBooks® and the ThriftBooks® logo are registered trademarks of Thrift Books Global, LLC