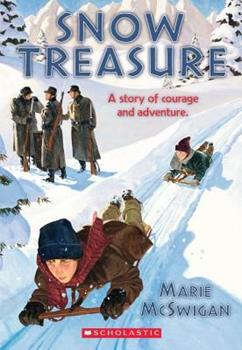 An actual incident in which Norwegian children smuggled gold past the Nazis is the basis for this story of courage and patriotism.

As enjpyable as an adult as it was when I was a kid!

Published by Thriftbooks.com User , 2 years ago
I can't even imagine how many times I thought about this book as the years went on until I finally bought a new copy. Even though it seems schools don't get into WW2 as much as they did when we were young(a lot HAS happened after all!), I'd highly recommend this book. Especially for any child with an interest in history & how kids truly CAN make a difference on such a huge level & show courage at the same time. I was maybe 4-5 when I first read this. And my heart still started to beat fast at the same parts even though it was 50 years later. Especially if your family has a bit of Norsk. Suitable for boys & girls. Both are heroes!

Published by Thriftbooks.com User , 17 years ago
When I saw this book, I thought that it would be just a normal book with non_exciting parts and exciting parts. I read the first chapter and didn't put it down for the rest of the evening. I wouldn't have put it down if my dad almost yelled at me to PUT IT AWAY. This book is about a boy and his friends who have their life in their hands. They have to hide a bunch of money and keep it secret from the Nazis. I would recomend tthis book to anyone who loves action and to learn a little bit about the Nazis.

Published by Thriftbooks.com User , 19 years ago
I read this book when I was 10 - I'm now 41. I've been looking for 31 years to find this book again and I'm ordering one dozen copies as soon as I'm done writing this review.This story has stayed with me since the day I read it. The courage and commitment of the children to help their country. The risks they took to move the gold under the very noses of Nazi officers. Boys and girls alike did their part to protect Norway's gold and their own futures.I can't wait to wrap up these Christmas presents for every child I know. This was one of the best books I've ever read and I can't wait to read it again.31 years - I don't think that's too long a time for success.

My family's involvement in this perilous

Published by Thriftbooks.com User , 20 years ago
I've read the reviews out here. What many people aren't aware of is that this is a true story. We recently learned that my great uncle was one of the people involved in moving the gold out of Norway. I'm not sure if Peter's snowballing a German officer is true or not (my uncle wasn't sure), but moving the gold via sled definitely was. After the gold was on board the ship, it was another perilous journey to bring the gold to America, one that he won't tell even us the full story of. Some of the things he knows he has to take to the grave with him for the security and future of Norway, much as we would love to hear them.As you read the book, keep in mind what he and many others of the Norwegian Underground sacrificed to keep not only Norway's economy safe from the Nazis, but their way of life.

A book of memories

Published by Thriftbooks.com User , 22 years ago
I grew up next door to Marie McSwigan in Pittsburgh, PA. She made the world come alive as she read to me and several neighbor friends. Much later we learned that we were hearing the first writing of her new book. She asked how we liked it and why. I think she used someof our comments. I have all of her books and read them now to my grandchildren. Many of the episodes are from incidents that happened in our neighborhood. It is truly wonderful to see Snow Treasure still in print. If you ever find other books by Marie McSwigan, I encourage to to buy them and read them.

Parents: This is an excellent choice for your kids

Published by Thriftbooks.com User , 23 years ago
I first read this book in 1968. I was completely absorbed by the story. As a nine year old boy, reading books was not my first priority, but the adventure of the story grabbed my attention and I had to be dragged kicking and screaming away from the book for dinner and bedtime. In later years I reread SNOW TREASURE and found it to be extremely well written, with solid character development. The nicest surprise for parents is that this is a true story from the years leading up to WW-II. I strongly recommend this one for your kids, even those who don't like to read.
Copyright © 2020 Thriftbooks.com Terms of Use | Privacy Policy | Do Not Sell My Personal Information | Accessibility Statement
ThriftBooks® and the ThriftBooks® logo are registered trademarks of Thrift Books Global, LLC