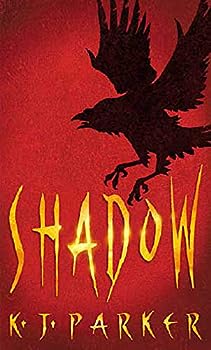 (Book #1 in the Scavenger Series)

This description may be from another edition of this product. A man wakes in the wilderness, amid scattered corpses & inquisitive crows. He's no memory of who he is or how he came to be there. The only clues to his former existence lie in his skill with a sword...

Published by Thriftbooks.com User , 15 years ago
Picked this book up after hearing very little about it, as I have been reading a lot of fantasy fiction involving mythology and unique religion. Very pleasantly surprised! Centers around a character who has lost his memory, which I admit is very cliched, but deals with it in a very fresh manner. As everyone he encounters meets an unfortunate fate, and towns fall around him, he is led to believe he is everything from a warrior to a god - and no one lets him in on the truth, as everyone he meets knows him, yet believes he is on a covert mission. Written in a very serious, yet humorous style (British author, I believe? Very similar, dry yet hilarious writing style.) You will find yourself laughing at situations and language used, and staying up late to find out what is REALLY going on. The first in a series of three, I HIGHLY recommend this book. A great fantasy story with an wonderful world, developed characters, and a ton of suspense.

Published by Thriftbooks.com User , 16 years ago
I tell ya what, i almost put this book down when i started it. But, i figured i should finish it out and see how it ended. See, it wasn't my type of book. But, as i finished it i was surprised by its storyline and ability to keep you guessing. Parker does a good job at stringing you along and then when you think you've got it, he turns it around and leaves you hanging. I ended up liking the book so much the moment i finished the book i order both books two and three. All in All it was a good, intriguing read.

Published by Thriftbooks.com User , 17 years ago
This book takes place in a midieval setting, of swords and halberds and horses. The plot centers around Poldarn, a man who has amnesia. Poldarn quickly discovers that he is good at fighting, which is fortuitous because most people who recognize Poldarn are hostile. "Shadow" is a bit fragmented with Poldarn's dreams (mystic visions?) of other people's lives; and the occasional chapter from another point of view. Still, this book is well written, fast paced, unpredictable, and has an interesting idea: if you had amnesia & kept getting hints that you're past was unpleasant, would you want to know who you had been?

Published by Thriftbooks.com User , 17 years ago
I highly recommend this one to people who wish to read something original. It can get confusing because your never really sure where the author is going and he purposely keeps you wondering. Sometimes funny and always entertaining the book started off a little bit simplistic and I thought I would put the book down but it sank it's teeth into me,ripped my head off,chewed on my entrails,crushed my spine,punctured my spleen and left me asking for more.

Published by Thriftbooks.com User , 17 years ago
This is the type of book that requires you to delve a little deeper beyond what is given at face value. The book starts with a man waking up laying half in and half out of a stream, with bodies scattered all around him. He has absolutely no memory of who they are, who he is, or how he got there. On face value, the rest of the book is his story and deals with his attempts to first regain his lost memory and then his desire to keep the memories lost.Underlying the entire series is the myth of the god in the cart which gives the book a deeper meaning.It is a fairly intellectual book. Not everything is laid out for the reader to understand. There are a lot of inferences that need to be made. So if you are looking for something mindless - this is not the book for you.I thoroughly enjoyed the book and recommend it highly, as well as the other two books in the series; Pattern and Memory. If you start Shadow, you have to be prepared to read the entire trilogy, because one takes you only part of the way into the depths of the myth come to life.
Copyright © 2020 Thriftbooks.com Terms of Use | Privacy Policy | Do Not Sell My Personal Information | Accessibility Statement
ThriftBooks® and the ThriftBooks® logo are registered trademarks of Thrift Books Global, LLC