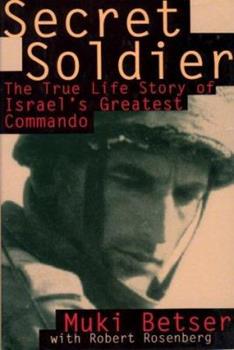 In this riveting autobiography, Colonel Muki Betser, Israel's premier special-warfare commander and counterterrorist for 25 years, recounts the inner workings of Israel's elite forces which until now... This description may be from another edition of this product.

Published by Thriftbooks.com User , 18 years ago
I found it impossible to put this book down. It is very well written and captivates you right from start with real-life story of one of the many Israeli heroes.This book is even relevant in today's situation because it talks about what Israel faces every day of its existence. It also shows what it means to be a soldier in the IDF. Enjoy!

Published by Thriftbooks.com User , 19 years ago
Muki Betser tells an intense account of his experiences as one of Israel's greatest commandos. Awesome book highly recommended. I read it in one day - couldn't put it down. Covers his experience in Shaked, Tsanchanim, and Sayeret Matkal - bascially starting from 1967. Despite the fact that his political views are outdated, (i wonder if he still thinks the same) this is a man who gave his entire life for the state of Israel.

Read this a while ago...

Published by Thriftbooks.com User , 21 years ago
I read this one a while ago, but recent events brought it back into the forefront of the mind. I remember that this was a really good book and gave me a perspective of the Israeli military that I never saw before. I knew they were very good, but I had no idea.I just hope that we don't have to resort to the level of security that they have in Israel or Northern Ireland. Also, this book makes me want to read other books about the Israeli military.

One of the best , if not the best

Published by Thriftbooks.com User , 22 years ago
As good as Marciko's Rough Warrior. True account no holds barred combat stories. Get it!

Far and Away the best War Memoirs I have ever read!

Published by Thriftbooks.com User , 23 years ago
I have never read a book that was more addicting than the SECRET SOLDIER. I have read it 4 times and I am still amazed at what the IDF can do. The missions that are described within this book will blow your mind from Entebbe to Prime Minister Ehud Barak running through the streets if Beirut in a dress and firing an Uzi. THIS BOOK IS FAR AND WAY THE BEST BOOK I HAVE EVER READ!
Trustpilot
Copyright © 2022 Thriftbooks.com Terms of Use | Privacy Policy | Do Not Sell or Share My Personal Information | Accessibility Statement
ThriftBooks® and the ThriftBooks® logo are registered trademarks of Thrift Books Global, LLC