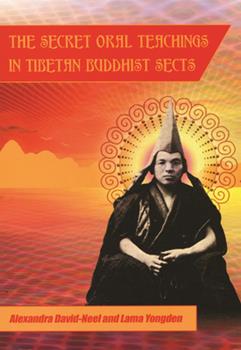 A short, accessible, and well-written guide to Buddhism by the remarkable Alexandra David-Neel. "The Secret Oral Teachings in Tibetan Buddhist Sects by Alexandra David-Neel and Lama Yongden, is always on my night stand. I return to it again and again in different stages of my life."--Marina Ambramovic, artist This is an account of the Madhyamika (Middle Way) school of Buddhism, a method of mediation and enlightenment that was developed by the great...

Published by Thriftbooks.com User , 13 years ago
The one reviewer who claims this is "old news" is pretty far off the mark. As Alan Watts said in the intro of the book, this is the "I told you so" book which you can whip out to back up your claims when other Buddhists accuse you of espousing Vedanta rather than Buddhism. Unfortunately, whether or not anyone will take this book seriously is another matter entirely. The most reliable names in modern Buddhism, including the Dalai Lama, have sung this author's praises, but some will never be able to see past her prior interest in Theosophy (in her early 20's), which she ultimately realized was fraudulent nonsense and left to spend the rest of her life very bravely exploring new territory in dangerous times and learning real Tibetan Buddhism right from the source: Tibet... during the start of the Chinese invasion. As the Dalai Lama said when he came to speak at the inauguration of David-Neel's museum, "She knew the REAL Tibet." She was one of the first Westerners, and certainly the first Western woman, to have a private audience with the Dalai Lama, helping to teach him about the West. When it was time for the Dalai Lama to pay back her kindness with an authentic Tibetan teaching, often he would direct her to a specific lama, one of his own teachers. The author of David-Neel's recent biography was invited on a speaking tour alongside high lamas, thus demonstrating the importance of her subject, Alexandra David-Neel. How many other western authors have lived in Tibetan caves for several years? Or adopted a monk as their son? These are "secret" teachings in the sense the book says they are: up to the hearer who hears them to realize the truth of the teachings, to penetrate their subtlety and depth. They are not often-repeated, worn-out teachings that everybody already knows. Not at all. I have a fairly large Buddhist library and haven't seen a one that explicitly teaches what this one does. There are many classics which deal with interdependence and emptiness, but none quite like this. Not even the restricted texts available only to those who have received certain transmissions. Best of all, the text is fairly short and direct. This was a great and unusual book 30 years ago and it remains so today. I have spoken to HUNDREDS of Buddhists online and in person who have no understanding or familiarity with the concepts in this book. And many have argued with me up and down about it, actually, thinking it puts too fine a point on their cherished vague ideas, which stem from a lack of familiarity with the higher and highest vehicle secret teachings. The wonderful thing about this book is that the teaching will be sensible to one who has studied Buddhism from all sides. Where the paths of renunciation, transformation and self-liberation meet is where interdependence and emptiness are fully realized beyond mere intellectual analysis. With this View stabilized, these teachings are easily comprehensible from personal experience. This is the way it is with

The Subtle Aspects of Tibetan Buddhism +++

Published by Thriftbooks.com User , 16 years ago
"Yet, despite the occultist flavor of its title, "The Secret Oral Traditions in Tibetan Buddhist Sects", is the most direct, no-nonsence, and down-to-earth explanation of Mahayana Buddhism which has thus far been written. Specifically, it is a wonderfully lucid account of the Madhyamika (or "middle-way") School of Buddhism, a method of meditation and enlightenment which was worked out sometime between 150 and 250 A.D. by the great Indian sage and pandit Nagarjuna." [from the forward by Alan Watts]

Published by Thriftbooks.com User , 21 years ago
A great quote from the book "Doubt is an incitement to research, and research is the path to true knowledge."Paraphrase between A David-Neel and her teacher as reported in the book (Note similarities to dialog of Don Juan and Carlos): "Why are these teachings secret? Does that mean I can't write and tell about them?" "No, Alexandra, these teachings are not called 'secret' because it is forbidden to talk about them. They are 'secret' because so few who hear them understand."

Published by Thriftbooks.com User , 23 years ago
I am noticing the similarity of present day quantum physics and some old world theories. I loved what Alan Watts had to say. I found this French philosopher/traveler's stories to be fascinating! Wish I could have traveled with her.
Copyright © 2020 Thriftbooks.com Terms of Use | Privacy Policy | Do Not Sell My Personal Information | Accessibility Statement
ThriftBooks® and the ThriftBooks® logo are registered trademarks of Thrift Books Global, LLC