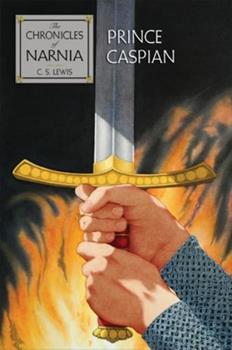 Prince Caspian : The Return to Narnia

(Book #2 in the The Chronicles of Narnia Publication Order Series)

A beautiful paperback edition of C. S. Lewis's Prince Caspian , book four in the classic fantasy series, The Chronicles of Narnia , featuring cover art from three time Caldecott Medal-winning illustrator David Wiesner and interior black-and-white artwork by the original illustrator, Pauline Baynes. The Pevensie siblings travel back to Narnia to help a prince denied his rightful throne as he gathers an army in a desperate attempt to rid his land of...

I did Not get what I ordered for

Published by Kj , 1 year ago
sent me a very old version of the book and charged me 3.99$

Published by Kristine , 1 year ago
I recently ordered this in hardcover and receive it paperbacked. I was so looking forward to having a set in hardcover. Very disappointed

Published by Thriftbooks.com User , 12 years ago
I like this edition as the print is large enough to help me learn Espanol.

Published by Thriftbooks.com User , 12 years ago
I use this book with the same title in English for English as a Second Language instruction. It works for teaching Spanish, too. To improve your vocabulary and sentence structure, read each paragraph in the unfamiliar language, then check your understanding from the copy written in your native language.

Published by Thriftbooks.com User , 13 years ago
"Prince Caspian" is very good and very exciting. You find yourself wishing you could travel to Narnia! Near the end there is so much strange magic happening it's kind of ridiculous, but it's okay, because all of it is for good. It's wonderful when Caspian's childhood nurse is reunited with him. There are so many different moods in this small book: happiness, anger, sadness, fright, and bravery. You see different beliefs in this book: belief and disbelief in the days of Old Narnia. Then there are the Telmarines, who seem to believe in the days of Old Narnia, but they don't want to. As Prince Caspian is delivered the shocking news that King Miraz will probably kill him so that he is no longer heir to the throne, Cornelius already has a plan in his mind to keep the prince from danger. You soon find out what has happened to Queen Susan's horn; Doctor Cornelius had found it after years of magic spells and terrors. He hands it to Caspian. "That," said Doctor Cornelius, "is the greatest and most sacred treasure of Narnia. Many terrors I endured, many spells did I utter, to find it, when I was still young. It is the magic horn of Queen Susan herself which she left behind her when she vanished from Narnia at the end of the Golden Age. It is said that whoever blows it shall have strange help--no one can say how strange. It may have power to call Queen Lucy and King Edmund, and Queen Susan and the High King Peter back from the past and they will set all to rights. It may be that it will call up Aslan himself. Take it, King Caspian: but do not use it except at your greatest need." It turned out the horn had the power to call back both the Kings and Queens of Old and Aslan. I very much recommend this book to anyone who is interested in Narnia. If you are a fan of "Lord of the Rings", you will like the Narnia books.

Book 4- A guide to the unending fantasy of Narnia

Published by Thriftbooks.com User , 19 years ago
Originally published as the second entry in the Narnia Chronicles, chronologically ?Prince Caspian? is published in modern editions as the fourth in the series. It is not the most exciting in the series, but it?s still an enthralling story. Through Doctor Cornelius, who has true Narnian blood, Prince Caspian discovers that he is the rightful heir to the throne and that his uncle King Miraz is a usurper. When Miraz fathers his own son, Caspian?s life is endangered and he is forced to flee. Summoned by a magic horn blown in this time of peril, Peter, Susan, Edmund and Lucy re-enter Narnia. Only with their help and the ever-present guidance of mighty Aslan does Caspian have any hope of saving Narnia from persecution and oppression under Miraz, and restoring it to the kingdom of peace it should be. The climax involves a thrilling and decisive duel.As with all the Narnia Chronicles, on the level of children the story functions as a perfectly comprehensible and exciting fantasy adventure, but on an adult level it imparts powerful spiritual truths about Christianity by means of numerous recognizable Biblical allusions. Lewis intended ?Prince Caspian? especially to portray the restoration of true religion after corruption. But it also portrays spiritual warfare, showing the importance of our sufficiency being in Christ and not in ourselves. As Aslan says: ?If you had felt yourself sufficient, it would have been a proof that you were not.? (p220) It further demonstrates the folly of atheism and importance of living by faith and not by sight, since God?s invisible nature does not mean he does not exist (p.150). The notion of Aslan?s perceived increase in size has profound spiritual implications about increasing one?s respect and awe of Christ: ?But every year you grow, you will find me bigger.? (p148) Such important moral lessons about the role of faith in Christ are typical of Lewis? style in the Narnia series...

A tale of awakening

Published by Thriftbooks.com User , 20 years ago
All of the stories in C.S. Lewis' excellent Chronicles of Narnia series are told in distinctly different ways. Prince Caspian could justifiably be said to be like an epic poem told in prose. It shares many qualities with other epics; most notably its beginning coming in the middle of the action. Prince Caspian, like other epics, contains a climactic battle. However, Prince Caspian (like all great epics) is not simply a book about battles. The great themes of Prince Caspian are those of awakenings, renewal and restoration.As the book opens, the Pevensie children (Peter, Susan, Edmund and Lucy) are suddenly called back to the magical land of Narnia from a British rail station. They return to find that the land of Narnia is suffering from the oppression of the evil Telmarine King Miraz who rules with an iron fist. The king's nephew, (and son of the murdered rightful king) Caspian, has discovered the truth about Narnia and has fled the palace in fear of his life. In his flight, Caspian encounters some "old Narnians" who used to live freely before the Telmarines came to rule Narnia. Under the Telmarines, the old Narnians have been facing extermination. After initial mistrust, the old Narnians agree to stand with Caspian in an attempt to reclaim his rightful throne from his uncle and to save those that are left of the old Narnians from certain death. A struggle then ensues.It is in the middle of this struggle that the Pevensies are called back to Narnia, where they once ruled as Kings and Queens. They encounter Caspian's loyal friend Trumpkin the dwarf. Trumpkin relates Caspian's story to them. The children agree to help Caspian. Together, the dwarf and the children set off to come to Caspian's aid. It is on this journey that the Pevensies and Trumpkin learn the old lesson that "The mind of man plans his way, But the LORD directs his steps." (Proverbs 16:9) Forced to take a different route back to Caspian's camp than the one Trumpkin took from it, the children and the dwarf become confused and lost. They strive to the utmost limits of their human strength and find that it is not enough. It is in the darkest hour of this struggle that Lucy thinks she sees something on the horizon...a Lion.What follows is a test of Faith for all involved. Lucy, being the youngest of the children and possessing the most "child-like" faith, overcomes her doubts. She is then visited by the Great Lion Himself, Aslan (Lewis' allegorical representation of Jesus). In one of my favorite scenes in all of the Narnia books, Aslan and Lucy discuss the lack of faith shown by the others and what must be done:"Now child," said Aslan, when they had left the trees behind them, "I will wait here. Go and wake the others and tell them to follow. If they will not, then you at least must follow me alone."This piece of dialogue is one of the reasons why Lewis is one of my favorite authors. In the span of three sentences in a children's book, Lewis captures the essence of Christ's universal
Copyright © 2020 Thriftbooks.com Terms of Use | Privacy Policy | Do Not Sell My Personal Information | Accessibility Statement
ThriftBooks® and the ThriftBooks® logo are registered trademarks of Thrift Books Global, LLC