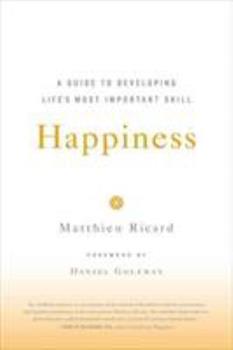 Happiness: A Guide to Developing Life's Most Important Skill

In this groundbreaking book, Matthieu Ricard makes a passionate case for happiness as a goal that deserves as least as much energy as any other in our lives. Wealth? Fitness? Career success? How can we possibly place these above true and lasting well-being? Drawing from works of fiction and poetry, Western philosophy, Buddhist beliefs, scientific research, and personal experience, Ricard weaves an inspirational and forward-looking account of how we...

As only a practicioner could say it....

Published by Thriftbooks.com User , 15 years ago
This is an amazing book. The minute I finished, I started over again. This book is about the pathways to happiness as understood and explained by a Buddhist monk (Ricard). Ricard's explanations and insights are extremely valuable and practical. Even more, Ricard has consulted all the leading research associated with the "science of happiness." This book is for anyone who believes that happiness is a learned behavior that requires daily practice. Its greatest strengths are its clearity, practical applications, and scientific base. It is a very rational approach to the subject of well-being. Plus, Ricard consults the leaders in the positive psychology movement-- a very good move. Read this book if you truly want to be happier. [...]

Published by Thriftbooks.com User , 15 years ago
Here is an example of a message that I received from a friend who read Happiness... "I'm flying. The two big things for me have been: While I know I'm a responsible person toward my friends and people I interact with, I hadn't recognized how much I had emotionally blocked out other people in general and the effect it was having on my mind. From a purely selfish perspective, I now see that the more I focus on empathizing with people who I have no connection with, the calmer and clearer my mind is and the happier I am. I didn't recognize the price I was paying for not wanting to empathize with people who don't have a direct bearing on my life. Secondly, I hadn't really conceptualized the difference between pleasure and happiness. Upon reading it in Ricard's book, it was immediately apparent to me and I realize how much my emphasis on the former at the expense of the latter has been a mistake. I think I viewed emotionally being engaged with strangers and people "out there" in general as a distraction and waste of time, at best, but hadn't realized that all the time I was engaging with them, albeit in a negative way. Guy, between 'The Joy of Living, Unlocking the Secrets and Science' and "Happiness" I'm now in a total blissed-out state. A couple of the things I've realized is that in terms of my own sustained happiness it's in my strong self-interest to try to be more compassionate toward people. Just starting to think that way has allowed me to exorcise a lot of petty conflicts and tensions that unnecessarily clutter my mind. I am so much calmer now. " This book is VERY well worth reading. It is a must read for anyone who wants to reach beyond their material goals, and realizes that the underlying goal is happiness. It is written in a clear manner that seems to resonate with many readers.

Published by Thriftbooks.com User , 15 years ago
Few books clearly articulate the richness of Buddhist psychology for the general reader. Few books can inspire the reader to live more skillfully and empower her with teachings and tools to cultivate true happiness. Sure there are any number of "self-help" books on "how to feel happy," etc., but Ricard's book teaches about a much deeper, transformative happiness, which is within the reach of every human being. Buddhist psychology, developed over many centuries, is consistent with much that we have recently learned and continue to learn about our minds and our brains from neuroscience, cognitive science, and "western" psychology. Ricard, a Tibetan monk, is equally at home in Buddhist teachings and contemporary science--he was a scientist before his days as a monk. In a world with so much violence, so much sadness, and so much negativity, Ricard teaches us how to cultivate happiness, not by blinding ourselves to reality or by looking to some other world above and beyond our own, but by looking upon ourselves and others with the loving eyes of the Buddha. And these teachings have nothing to do with believing any doctrines or even "the truth" of Buddhism. They are practical teachings to be applied in everyday life. The "truth" is in the practice. The Buddha did not want anyone to believe anything just because he said it. He invited people to see for themselves. So see for yourself. Even if you are not and have no interest in "becoming a Buddhist," I highly recommend this book. I would not consider myself a Buddhist, but the values expressed by Ricard are values I cherish and aspire to embody in my day to day life. The chapters are also relatively short, so each one can be read and fully digested before moving to the next. (Perfect for reading in bed or on public transportation.) If taken to heart, this book will surely benefit you. I hope that it does.

Happiness Is A Skill

Published by Thriftbooks.com User , 16 years ago
Matthieu Ricard was born and raised in France. He had the makings of a stellar career in science, studying in his student days with a Nobel-prize winning scientist. But throughout his 20's, he shifted his interests more and more towards spirituality. For the past 30 years, he has lived and studied as a Tibetan Buddhist, in Nepal. He often serves as the French translator for the Dalai Llama. Ricard is a man who knows science. And, as a Frenchman, is deeply familiar with pessimism. He says, in France, happiness is considered boring, while pessimism and misery is considered quite interesting. "Happiness is only for the naive" is a common Western mindset. However, Ricard says: "Not true." Not only is happiness interesting - it is a skill, a challenging skill to be acquired only through intense practice. Pessimism, on the other hand, is boring - for it creates apathy, and a general lack of zest for life. As a man deeply interested in science, Ricard knows what he's talking about. He explains amazing discoveries made by the Mind & Life Institute. Placed under MRI brain imaging, Tibetan monks have shown to experience far greater happiness and are more emotionally balanced than any 'average' person. Scientists can gauge happiness by the amount of activity in the frontal lobe related to positive emotions. (There's also a section of the brain related to negative emotion, and criticism, which remains relatively dormant.) In one experiment, testing what's called a "startle" reflex - something that every human has (it's an uncontrolled flinch of one's facial muscles that occurs whenever a loud noise goes off) - a spiritually advanced monk was monitored for this reflex. When the loud noise went off, unlike anyone else ever tested, he did NOT flinch. The heart rate still went up, but the fear and flinch reflex were less apparent than in any experiment to date. Meaning: there is scientific proof that meditation grants a person peace of mind. This feat is accomplished through a sort of mind jujitsu - a way of keeping one's thoughts in balance. And one can accomplish it through egolessness and unattachment. Not that Ricard promotes sitting on a mat, and meditating all day. He promotes ambition, a strong willingness to help others, and a general enthusiasm in taking up various activities. But acquiring emotional equilibrium can be difficult, but ultimately rewards the person who practices it. This discipline, Ricard explains, is the "secret" to life-long happiness.

An Intelligent Guide to Well-being and Happiness

Published by Thriftbooks.com User , 16 years ago
Review of "Happiness: A guide to Developing Life's Most Important Skill" by Matthieu Ricard. Published by Little Brown. What a joy to find such an intelligent and creative approach to the universal quest for happiness and well-being! Matthieu Ricard begins by examining our definitions of happiness and then leads us on a journey that explores the causes and conditions for happiness, our own inner mechanisms that do or don't create happiness, how to deal with death and difficulties, the sociology of happiness, and so on. The book's emphasis is on how to develop inner resources for a sense of happiness and fulfillment that is not dependent on outer circumstances. There is real freedom in the knowledge that we can move towards an authentic sense of well-being by working with our ways of relating and processing the obstacles and circumstances that present themselves. This is all helped along by the short enjoyable exercises that lead the reader through a process of getting to know the mind and how it works. Matthieu Ricard's voice is quite unique and I liked his use of metaphor to describe various emotional states and how to deal with them. I also found the sociology of happiness an interesting chapter, revealing the trends of our society, and I especially liked learning "first-hand about the work of neuroscience and the brain. 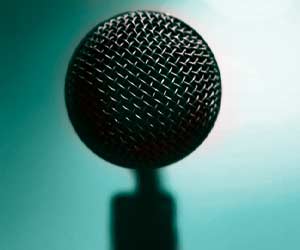 Creativity. Vulnerability. Justice. Happiness. Motivation. Feminism. Perseverance. Can these qualities be gained in 25 minutes or less? Probably not. But luckily, we have books!