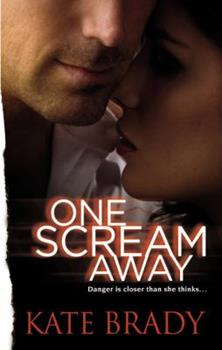 (Book #1 in the Sheridan Series)

Kate Brady has made her mark with a taut, masterful debut of chilling suspense that grabs you by the throat and heart and won't let go. Riveting storytelling packed with unexpected twists and unforgettable characters. Prepare to stay up all night, then sleep with the lights on. -- Roxanne St. Claire, New York Times bestselling author Kate Brady's debut novel is everything romantic suspense should be: scary, sexy, pulse-pounding, and page-turning...

Published by Thriftbooks.com User , 13 years ago
Kate Brady has won or been a finalist in many writing contests, including the Golden Heart from the Romance Writers of America, the Maggies, and the Suzannah. One Scream Away is her debut novel. After a previous case goes horribly wrong, Neil Sheridan leaves the FBI behind and embarks on a quest to drown out his sorrows in alcohol and woman whose names he can't even recall. Now working for a private security organization, the scars from his past emerge when an old colleague and friend knocks on his door about a case which is eerily similar to a disturbing one from his past. Across the country, one by one, women are brutally murdered in comparable means to resemble antique dolls. The connection- Beth Denison- a single mother who is receiving calls from the killer and at one time has researched the dolls. A beautiful woman with a secret she'll do anything to keep. After Beth surrenders to Neil, both in his embrace and in his protection, Neil discovers that seven years ago Beth was attacked by the killer named Chevy Bankes. Beth created a new life for herself, far removed from the tragedy of that night. But now Bankes is out of prison and after her, killing women in prelude to his real desire- her. It may just be too late for her and her daughter when the truth comes out. Neil knows Beth isn't telling him everything, like why Bankes really wants her screaming, or why she'll consider the unthinkable- facing Bankes alone. The only real fault I have with the book was the secret Beth was keeping. I figured it out very early on. Then again, the author may have written it or wanted it this way. I didn't feel it ruined the story either. I think, in a story like this, where there is so much trauma from the past, Kate Brady did a remarkable job of understanding her characters and reactions from them. This wasn't just a romantic suspense, but a delve into the psyche of human nature and how we rebound from heartbreak and previous experience. This may be a bit too deep of a statement for a fiction book, but from a writers perspective, it made the plot flow well and engages the reader without them understanding why. I felt it was worth mention because a great author does this well. This book is well worth the read for the characters alone, both antagonist and protagonist, you walk away, or close the book, without questions and with truly feeling what made them tick. I was particularly pleased with the ending. Without having to put up a spoiler alert, this wasn't a quick, wham-bam-thank-you, Mam finish. The suspense slowly built until the last page. As previously stated, the plot flowed well, was well spaced, and there weren't any areas where I lost interest. One Scream Away, by Kate Brady, is one heck of a break-out book from a talented emerging author. Kelly Moran, Author and Reviewer

Published by Thriftbooks.com User , 13 years ago
Kate Brady is a name fans of romantic suspense will not want to forget. Her debut novel One Scream Away is sure to make the best seller list. Brady combines just the right amount of romance, fear, suspense, to keep reads eagerly turning the pages. If this is what she does with her first novel I can hardly wait to read her next one. Chevy Banks is a serial killer. He torture's and murders women. The master of disguise is out of prison on parole and he wants revenge on the woman that put him there, Beth Denison. He continues his torture-murder rampage, deviously taunting Beth with clues leading to his victims. He's preparing himself for his ultimate victim, Beth's daughter, Abby. Neil Sheridan, former FBI agent joins the investigation. An emotional attraction forms between Neil and Beth. Working alone they will never catch the sadistic killer...maybe together they can. Brady allows the suspense to build. Just when you think it cannot get better, there is another twist to the plot that surprises you. The characters are exquisite; the plot is excellent. One Scream Away is perfection.

Published by Thriftbooks.com User , 13 years ago
Beth has lived a life of tragedy. She lost her husband, mother and father all on the same day. Now, Beth's life is in danger. A sadistic serial killer, Chevy, has his eye on her and is determined to get what he wants. Beth can't go to the police. Her and Chevy have a history. She has a secret and she promised never to tell. Now she and her daughter are forced to pick up and take off. Neil used to be employed by the FBI and has been asked to work as a consultant on Chevy's murder spree because of the similarities of a previous case. Beth becomes a suspect because Chevy has used his victim's cell phone to call her. Neil knows there is something Beth isn't telling him but pretty soon Neil starts to fall for her. Will Beth open up and let him help her or will she fight the maniac all by herself?

Published by Thriftbooks.com User , 13 years ago
This book was suspenseful from the very start. Absolutly great writing. Was on the edge of my seat the whole time. Can't wait for her next book to come out July,2009.

Published by Thriftbooks.com User , 13 years ago
After just a few years behind bars, Chevy Bankes is paroled from prison to hunt, attack, and kill female prey. During his time in jail, he obsessed over the woman who sent him away; blaming her for his incarceration though he assaulted her. Chevy is honing his craft torturing and murdering women with his plan to come for Beth Denison and her daughter Abby. He calls her from the phone of his first victim just to say hello and warn her Abby is his target before Beth. As more women die, Beth's only hope to keep her daughter safe seems to be former FBI agent Neil Sheridan, but he is burned out having worked this case very poorly once before. She doubts she can rely on him while he sees her as his redemption for failing to keep a victim safe from Bankes. Together, they might stand a chance; separately they will be lucky to survive the ordeal from this lethal predator who waits inside Beth's home for the right moment. This is a terrific serial killer thriller that keeps the expected romance for the most part in the background; in fact the romantic subplot is unneeded distracting baggage. Beth and Neil are strong flawed characters whose past has returned with a vengeance; while Chevy is a more typical literary serial killer. Fans of tense cat and mouse confrontations will want to read this tense tale as Kate Brady is an author the sub-genre can bank on. Harriet Klausner
Trustpilot
Copyright © 2022 Thriftbooks.com Terms of Use | Privacy Policy | Do Not Sell My Personal Information | Cookie Preferences | Accessibility Statement
ThriftBooks® and the ThriftBooks® logo are registered trademarks of Thrift Books Global, LLC