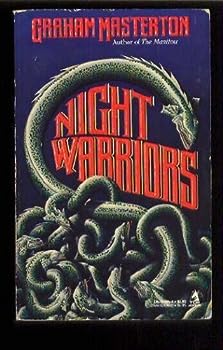 (Book #1 in the Night Warriors Series)

When three strangers, Henry, Susan, and Gil, discover a corpse partially consumed by deadly eels, they have no way of knowing that it will lead to a confrontation with the devil.

Masterton at his best!

Published by Thriftbooks.com User , 16 years ago
I have lots of Grahams' books....In my opinion, he's a horror writer in a genre all of his own! Now I LOVE Stephen King and Dean Koontz. Clive Barker, Thomas Harris and many others, but -I go to bed with Graham Masterton! When I don't want to sleep, -when I want an intelligent scare-the-crap-out-of-you story that lingers and keeps coming back to haunt you over and over again, any one of Graham Mastertons' books will surfice . He's simply the greatest of them all!

Try not to have another nightmare, someone may be watching....

Published by Thriftbooks.com User , 16 years ago
Book 1 of the Night Warriors saga and the beginning of a great series. It was hard to swallow, with Masterton taking break from his extremely gory stuff to writing a fantasy book mixed with extreme horror. That is Night Warriors. Several individuals are chosen by the messenger of God to do battle against evil. They have been chosen and so have their battle fields: Dreams. They not only have to worry about being killed by the demons, but also by the dreamers themselves. Graham Masterton, a true master of horror, is one of the best horror writers out there. You will not be disappointed!

Published by Thriftbooks.com User , 19 years ago
If you can't find a book called Night Warriors. You can try and find a book originally written as Nightspawn. It's really the same book (same story) except the publisher changed the title. Hope this helps in your search.

Published by Thriftbooks.com User , 19 years ago
I've been on a Masterton kick for the past couple of months and recently reread this gem after many years...A group of strangers come together at the scene of a gruesome death. A nude woman is found on the beach, her stomach writhing with freakish, bloodthirsty eels. The strangers soon learn that their meeting is more like fate and what they have witnessed is the birth of the "nightspawn", the brood of an ancient demon that lives in the nightmares of humanity. The demon is on the verge of invading the waking world and the group is enlisted by a strange, angel-like creature that tells them they are the living inheritors to the legacy of the "night warriors", a group who can leave their bodies and move through the world of men's dreams to fight the demon... Masterton has one of the most amazing imaginations in all of horror fiction and this first in a trilogy (where nearly all of the books stand-alone,) is a gruesome thrill-ride. It has some of the most grotesque and memorable scenes in all of horror fiction. There's a scene where a housewife gives birth to more of the nightspawn and it is one of the bloodiest and most outrageous scenes I've ever read. I was gasping out loud as I read it. For Masterton fans and horror fans, this book is a must. The more of his work I read, the more I'm beginning to think that he is one of the best horror writers working today.

Heroes in their dreams....

Published by Thriftbooks.com User , 22 years ago
A messanger from God is sent to bring together Night Warriors, heroes that battle demons in the dreams of man kind. this is a well written book and irecommend this to anyone who loves MASTERton and who believes in the unbelievable!!
Copyright © 2020 Thriftbooks.com Terms of Use | Privacy Policy | Do Not Sell My Personal Information | Accessibility Statement
ThriftBooks® and the ThriftBooks® logo are registered trademarks of Thrift Books Global, LLC