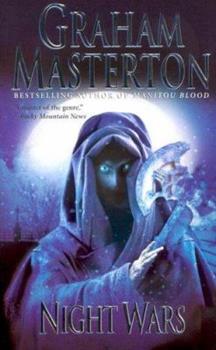 (Book #4 in the Night Warriors Series)

In this original novel, the dreamworld becomes a battleground between good and evil.

Published by Thriftbooks.com User , 14 years ago
Graham Masterton is both prolific as well as diverse. The fact that he has a number of novels with characters and scenarios in their Third instalment ( see the Novels due to be released soon, and later in 2007)shows that he knows that he has a following and he delivers what people want.And he really delivers in the respective genres he focuses on, and delivers well. The first, as far as I am aware of, is his Manitou series, i think BURIED was the last in the series. But I prefer his Horror work, however, I came to the first in the Night Warrior series thinking it was horror, and I was plasantly surprised. Masterton delves more deeply into character in this Book than I have read in many of his previous works in the Horror, and quasi-Horror world ( I think that Night Wars can be at least billed as Sci-Fi Horror). It is still in his fabulously lush first person Narrative style... with rare third person passages... no observer element, he takes you right into the action. It is severely toned down in terms of his Horror style of Uber-Violence, but always done in context, never gratuitous. The world he creates is still his trademark mythical realms. And there are several passages where the ultra/uber violence is very extreme. Some of the elements have been done in other books by Masterton, but with his output being so extensive , at least in Horror, I guess the volume of material will ultimately end up with some material being "Re-cycled".However, Masterton's work is still great. The tone of this Book is superbly apocolyptic, and in no way is it similar to the Nightmare on elm street series. It is closer to the WARLOCK movie of the 80s with Julian Sands where the "Unmaking" of Creation is at hand... Enjoy, this is a great Yarn ( hopefully I can get it in Hardback)

Published by Thriftbooks.com User , 15 years ago
When battles of man kind move from war fields to the wide spanning Elysian fields dreams are made of, no one is safe in their homes, their beds and definitely not in their own heads. Following the previous three installments of this astral saga which are Night Warriors (1986), Death Dream (1988) and Night Plague (1991) this can safely be read on it's own but I would suggest following up with the previous books, if one is content with Night Wars. Masterton is only limited by his own imagination in the electric world of mechanical costumes, warriors wearing helmets made of prismic lenses, wearing specific uniforms made for their tasks wielding the most spectacular weapons from the Sung Gun, to the Opera Pistol, Deathwatch Torpedo Pistols or even a gun that hits a target and rearranged it's DNA to the point where the body stops believing in it's own existence and crumbles. Always graceful and prominent like a hawk, Graham creates warriors dormant in some every day people who have no idea that in case of an attack they need to be told of their special birth right and to put their own life in order to save man kind. Night Wars if truly a fantasy book with a big swirl of horror. The Night Warriors are some of the most normal people in Ohio who drive cabs, work in food shops, write newspaper articles or work in medicine. Upon a terrible tragedy, when new born babies born in that area cannot stop crying and slowly start dying one by one, a mysterious man by the name of Springer starts assembling his army. He visits each one of the main five characters and shows them their hidden potentials. They transform into Night Warriors, each with a specific task; they are good at map making, creating any creature at whim from their imagination, moving time to a walking artillery departments. They enter the world of dreams of people who have been chosen by two evil characters; Winterwent and the High Horse. One frozen solid riding on a tall throne of ice lead by hoards of ice wolves and the other a creature evil and blood thirsty riding three horses, one on top of the other wearing a cape made of screaming animals. All the battles they fight take place in people's dreams, and I was mesmerized and totally engrossed in the incredible weaponry, sinister characters who were part animals, part human like half ninjas-half gray wolves, armadillo rats, black crabs or entities wielding swords that upon one cut inflicted a plague of worms to eat away the victim. Graham impressed me greatly with his knowledge of the most fantastic creations, his dialog that read like a caramel drenched apples and the world of dreams that was a true portal to the secrets of the universe. The Night Warriors have to learn to fight and figure out solutions while running short on time, and the whole mystery is why Winterwent and High Horse wanted those babies, what they needed their dreams for, as it would hold the answer for everyone walking on Earth. What happens in the dreams of ordinary peopl
Copyright © 2020 Thriftbooks.com Terms of Use | Privacy Policy | Do Not Sell My Personal Information | Accessibility Statement
ThriftBooks® and the ThriftBooks® logo are registered trademarks of Thrift Books Global, LLC