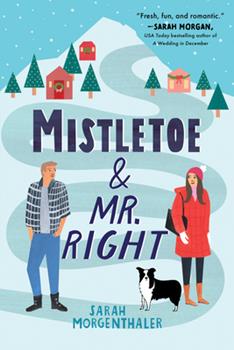 "Fresh, fun and romantic."--SARAH MORGAN, USA Today bestselling author of A Wedding in December How the moose (almost) stole Christmas. Lana Montgomery is everything the quirky small town of Moose Springs, Alaska can't stand: a rich socialite with dreams of changing things for the better. But Lana's determined to prove that she belongs...even if it means trading her stilettos for snow boots and tracking one of the town's hairiest Christmas mysteries:...

Such a cute sequel

Published by Librarypatronus , 9 months ago
Such a cute sequel! I had a feeling from the description that this one would be more up my alley than the first one, and I was right. This one follows Lana (rich outsider) who has been trying to fit in with the locals of Moose Springs, Alaska for most of her life. She has a special place in her heart for the town and has made a few friends, including introducing her friend Zoey to a local in the previous book. She has a thing for Rick (a divorcé local who runs a pool hall), and he has a crush on her too. Lana just wants to be accepted by the locals and takes on the hunt for "Santa Moose", a moose that is taking down Christmas lights and decorations, but that no one has ever seen in person, let alone caught. Between that and her family drama, she has a lot going on! I loved the sequel even more than the first one, because I loved the characters, their dynamic, and the kind of tropes used. Rick doesn't fall in with everyone else in hating tourists, especially Lana, right from the opening of the book he is kind to her. Lana seems kind of cold and cutthroat to the villagers, but she's sweet and trying to help and more sensitive than she lets on. There wasn't near as much punching in this one, too, which I preferred. I also loved getting to see Killian (the good Killian), as well as Rick's nephew. I can't wait to pick up the third one!

A fun return to Moose Springs!

Published by lizz2018 , 9 months ago
Lowering my rating slightly because all night I was plagued with the loose threads left behind in this story. Obviously the main plot was resolved, but a lot of things were introduced in the last bit that weren't completely resolved and that's frustrating. I love Moose Springs SO MUCH. And I love all of the tropes that these books have in them. And I also loved that we got to see a continuation of Graham and Zoey's story, some romance series ignore the previous couples, when we all know I'm reading the sequels to see more of the original couple! I felt like the ending came to fast, though maybe that's because the ending came at 84% in the Kindle. Which is the worst feeling.
Copyright © 2020 Thriftbooks.com Terms of Use | Privacy Policy | Do Not Sell My Personal Information | Accessibility Statement
ThriftBooks® and the ThriftBooks® logo are registered trademarks of Thrift Books Global, LLC