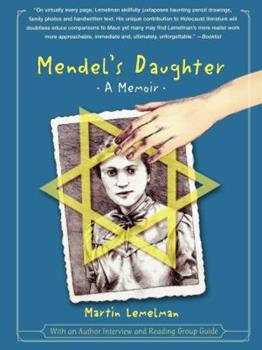 In 1989 Martin Lemelman videotaped his mother, Gusta, as she opened up about her childhood in 1930s Poland and her eventual escape from Nazi persecution. Mendel's Daughter , now in paperback and selected as one of the best books of 2006 by the Austin Chronicle , is Lemelman's loving transcription of his mother's harrowing testimony, bringing her narrative to life with his own powerful black-and-white drawings, interspersed with reproductions of actual...

Published by Thriftbooks.com User , 15 years ago
MENDEL'S DAUGHTER details the harrowing story of Martin Lemelman's mother and her family during the Holocaust. It is a story that Lemelman grew up knowing very little of. But in 1989, after his mother, Gusta, dropped a frozen chicken on her foot (causing it to be broken), Lemelman brought her to stay at his house in Pennsylvania. In part to curtail her efforts to do all of the cooking and cleaning at his house with her broken foot, and in part to have a family history that he would be able to pass along to his own children, Lemelman persuaded his mother to finally share her story. He wisely videotaped her. After her death a decade ago, he watched the recording, edited the story Gusta related by reorganizing it chronologically and augmenting her accounts with those of his Uncle Isia, who also survived. He then illustrated it with hundreds of drawings interspersed with actual documents and some little black and white photos his mother had saved from her childhood. Gusta Mendel grew up in a prosperous and well-regarded Jewish family in a portion of Poland that is now part of the Ukraine. This was a region that during World War II was invaded first by the Communists and then by the Nazis. We know from the outset of this memoir that this is a story of survival, that Gusta made it through the Holocaust. Following the historical and personal events that are depicted in this book, Gusta would eventually come to America and, with her husband, raise Lemelman and his brother in the back of their Brooklyn candy store. The rest of the Mendel family was murdered by the Nazis, but Gusta, Isia, Yetala, and another sibling, Simon, lived. The four siblings survived in the woods through two winters, digging themselves a series of underground shelters, burying the potatoes and sugarbeets they'd steal from fields in the middle of the night, and getting some help from a few people who were sympathetic to their plight. "For us, the war ended in March-April 1944. "Who could believe that the German army coming back to Germakivka would be the beginning of our liberation? This time, thanks God, they was coming from the East, running away from Russia." The result of Lemelman's labor of love is the real deal: an illustrated memoir which, while technically published as an adult book, will be incredibly approachable, engaging, and memorable to middle school and high school age readers.

A Heartbreaking and Heartwarming Story of Survival

Published by Thriftbooks.com User , 16 years ago
I picked up Martin Lemelman's book, "Mendel's Daughter," and did not put it down until I had read through to the last page. The story is familiar, yet new--a testimony to the spirit, faith, and tenacity of those who did whatever they could, whatever they had to do to survive the atrocities of the Holocaust. Yet it is much more than a tale of survival or an account of the fate of the Jews at the hands of the Nazis. It is a touching, poignant story of a family that although divided by circumstances, remains whole and committed to surviving, supporting each other, reuniting, and, throughout, holding tight to their beliefs and traditions. The beautiful artwork that pictorially weaves this tale brings the characters to life, and the reader cannot help but feel their pain and anguish, their struggle to survive, their love and their joy. The drawings, the photographs, and the text of "Mendel's Daughter" all combine to create a timeless memorial to a family, a people, and a period in our history that must never be forgotten or dismissed.

Published by Thriftbooks.com User , 16 years ago
As an Interviewer for Steven Spielberg's Survivors of the Shoah Foundation, I have heard many moving testimonies, but Mendel's Daughter: A Memoir touched a raw nerve. Through his drawings, Lemelman was able to convey not only his mother's story, but his emotional reaction to it as well.

A beautiful and essential book

Published by Thriftbooks.com User , 16 years ago
This gorgeously illustrated memoir has to be one of the most original contributions to Holocaust literature ever conceived. Written with grace and stunning emotional restraint, it personalizes a tragedy whose enormity is impossible to grasp, and also serves as a moving testatement of a son's love for his mother. An essential book for all, regardless of one's faith.

Settle in and listen to Gusta's voice

Published by Thriftbooks.com User , 16 years ago
If you've ever had the privilege to listen to survivor testimony, this beautifully illustrated version of direct testimony is going to be recognized for its obvious historical value, as well as for its amazing story and feeling. You absolutely hear the voice of Gusta, uniquely written with her inflections and articulation. This is a wonderful book for any library, to be appreciated by all ages.
Trustpilot
Copyright © 2022 Thriftbooks.com Terms of Use | Privacy Policy | Do Not Sell My Personal Information | Cookie Preferences | Accessibility Statement
ThriftBooks® and the ThriftBooks® logo are registered trademarks of Thrift Books Global, LLC